Jake Guentzel, Evgeni Malkin and Sidney Crosby also scored for Pittsburgh, which snapped a two-game skid and beat its Metropolitan Division rival in a game marked by big hits and scuffles. The Penguins began the day tied for the second wild card in the Eastern Conference. 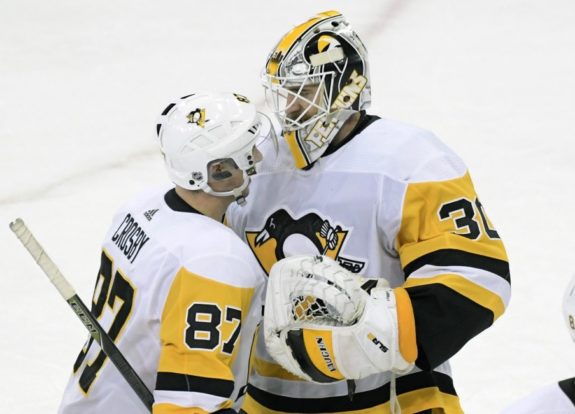 Oliver Bjorkstrand and Cam Atkinson scored and Sergei Bobrovsky stopped 22 shots for the Blue Jackets, who lost after posting back-to-back shutouts last week and revamping their lineup just before Monday’s trade deadline. Columbus started the day in third place in the division.

Crosby sent a centring pass from the left corner to Guentzel in the slot and he went top shelf on Bobrovsky with 6:15 left in the first period to open the scoring.

McCann made it 2-0 late in the period when he rifled one in with the unwitting assistance of Columbus defender David Savard, who appeared to keep Bobrovsky from seeing the puck until it was past him.

Malkin extended it to 3-0 early in the second with a long, rising shot from the left point before Bjorkstrand charged in and shot over Murray’s glove to get Columbus on the board.

Atkinson scored his team-leading 35th goal on a power play when Artemi Panarin’s hard shot deflected right to him in the right circle. But the Blue Jackets couldn’t tie it.

McCann banged a wrist shot past Bobrovsky with 6:33 left in the game, and Crosby scored an empty-net goal with five seconds remaining.

NOTES: Pittsburgh D Kris Letang (upper body) and D Brian Dumoulin (concussion) didn’t play after being injured in the outdoor game Saturday at Philadelphia. … Columbus forward Boone Jenner played in his 400th game with the Blue Jackets. … Ryan Dzingel, traded to Columbus from Ottawa, got his first assist for his new team. … Keith Kinkaid, acquired by Columbus from New Jersey at the trade deadline to provide goalie depth, was a healthy scratch. … D Erik Gudbranson, obtained Monday from Vancouver, didn’t play for Pittsburgh because he’s going through the immigration process.

Penguins: At the Buffalo Sabres on Friday.