The Huffington Post recently reported that Kenneth Faried of the Denver Nuggets became the first NBA player to join the gay rights sports group, Athlete Ally. This nonprofit organization challenges homophobia in sports. Its mission statement encourages athletes, coaches, parents, fans, and other members of the community to respect all individuals involved in sports.

For more information on the organization, check out the following website: 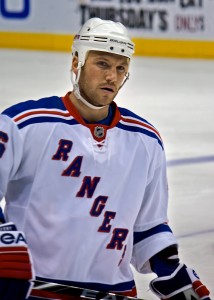 This organization gained attention in the hockey realm when former New York Rangers player, Sean Avery became part of the board. Since his joining the organization in May 2012, Avery has been very vocal about his involvement and support for the cause. In an interview on OTR with Michael Landsberg, Avery explained the importance of educating people on acceptance and equality. He, himself, has faced homosexual comments and criticism for his interest in fashion. Fortunately, equipped with a strong personality and sense of self, Avery has refused to let others affect him. Throughout his hockey career and even now, he continues to engulf himself in the fashion world. His personal experiences will be instrumental in addressing these issues and making changes.

The reality is that there exists a stigma against gay athletes. There have always been people sounding off about their feelings on this issue. Most recently, Chris Culliver of the San Francisco 49ers stirred up controversy when he stated, “I don’t do the gay guys, man. I don’t do that. Got no gay people on the team. They gotta get up outta here if they do…Can’t be…in the locker room…You’ve gotta come out 10 years later after that.” It’s no question why gay athletes are not addressing their sexual preference- constant criticism and comments make them feel uncomfortable or unsafe about coming out.

Other professional stars aligned with Athlete Ally are Brandon Ayanbadejo of the Baltimore Ravens and Connor Barwin of the Houston Texans. International athletes and college players are also joining in. With more and more athletes joining the organization, the initial steps have been taken to combat homophobia in sports. Athlete Ally is at the forefront of challenging this issue and it’s inspiring to see athletes from all sports arenas get behind the cause.