The paths to the National Hockey League are widespread. Players not only come from all corners of the globe but take different steps to chase their dream of playing in the premier league in the world. For North American born players their are three main entryways. A majority of players who now suit up in the NHL played in either college, unpaid juniors or paid juniors on their way up. The first two examples usually coincide as young skaters will only join unpaid junior leagues in order to maintain NCAA eligibility. The North American Hockey League is one of these such leagues.

Last week I found myself in the small town of Wichita Falls, Texas for a weekend series between the Wichita Falls Wildcats and Lone Star Brahmas of the aforementioned NAHL. These two franchises are more than a decade old and have a rivalry that stems from being only two hours apart in a league spread throughout the midwest and even up to Alaska. In the past few seasons these teams have also been atop the standings in the highly competitive South Division, adding fuel to the fire.

Entering the weekend, Wichita Falls was in the midst of their best season to date and in front of Lone Star by 8 points for the hold of the division. Lone Star had one game in hand. This would be their last weekend series and would feature two games at Kay Yeager Coliseum, the Wildcats home arena, on Friday and Saturday night.

As you entered the arena with locals rooting for the Wildcats and visiting fans who had taken the two hour trip up US-287, their was a sense of commitment. In a world of stadium relocations and lockouts, this small league had a band of dedicated fans who came with signs both for their home team and against their bitter rival. Bad blood from previous matchups even led to players from the Brahmas taunting the local crowd. 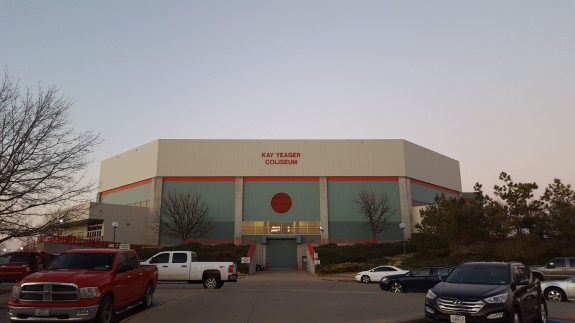 This stage of the journey, with the ambitions of a chance in the NHL, is pure. Money hasn’t caused holdouts, trade rumors haven’t caused controversy and talk of rule changes is nonexistent. There is only a group of young men with skates hoping to win that game, that night so they can continue to play the game they love as long as possible.

The action on both nights did not disappoint. A sense of urgency filled the air with both teams hoping to enter the final stretch, 20 some games remaining, with the momentum to take the division crown thus avoid ing the 2-3 playoff matchup likely against a formidable team out of Topeka. The division features a large drop off in points after third place making the one seed appealing.

On the ice, two nights of hockey yielded two overtimes. Friday night, recent Denver University commit Adam Goodsir scored the knockout punch for Wichita Falls and the second night he struck again with a shootout winner in the 18th round, yes the 18th round. The goaltenders put on a show with only 5 successful attempts per team through the first 17 rounds of the shootout before Goodsir sent everyone in “Wichy” home happy. During each approach of the skills competition, the small yet loud crowd of fans who came out the KYC were silent only to erupt on success or sigh at failure.

Before the weekend was over, the Wildcats hosted their annual ‘jerseys off our backs’ auction to benefit Children’s Miracle Network. Thousands of dollars were raised to aid local hospitals in treating sick children.

Before leaving the Lone Star State, I attended a Dallas Stars game in which they hosted the Calgary Flames. The arena was packed, the crowd was loud and the hockey was the best in the world. I sat and thought about the quaint beauty of junior hockey, watching the clock run out on a Stars victory.