Every night, every team says that they play in front of the best fans in the league. But be real, not all of them can lay claim to being the best NHL fans.

Some teams have a diehard fan base that purchases every piece of merchandise that gets released while others can barely fill more than half an arena for a weekend game. There are some teams that play in front of fans that sit quietly on their hands rather than cheer on their teams without a screen or organized provoking them to.

Using a custom made algorithm, we here at The Hockey Writers have decided to finally see what team can boast that they truly have the best fans in the league. The factors used in this list are as follows:

After reading the rankings, be sure to leave your thoughts on the best fan bases in the comment section below. Remember, this is a ranking based on numbers gathered and calculated rather than personal opinion.

Not only are the Hurricanes the lowest-ranked former Stanley Cup champion on the list, they are the lowest-ranked team in the entire league. Social media engagement is next to nothing, and attendance continues to plummet with poor play. The fans showed up during the team’s cup run, but haven’t really cared since.

The fans in Florida haven’t had much to cheer about since the Stanley Cup Finals in 1996. They’ve hosted three playoff series since then, and the team continues to under perform on the ice. Fans in Florida will only support a winning product, and it shows when there is hardly anyone in the stands during games throughout the year.

For as much flak as the Coyotes fan base gets – much of it is deserved – there really are some passionate hockey lovers in the desert. It may not be many, as shown by there attendance rankings over the years, but if this team can move back into a city like Phoenix or Scottsdale, engagement could easily rise.

Despite being the only Tri-State Area team to win a Stanley Cup in the 21st century, the Devils just don’t have the type of fans that the other two area teams have. Attendance is always near the bottom of the league, and that was the case even when they went to the Finals in 2012. But one has to wonder if that’s because of their loyalty or the neighborhood where the arena is.

The third former cup winner to be in the bottom five, Dallas Stars fans are finally starting to realize the team’s potentially as they improve in talent. However, that doesn’t make up for the fact that at the start of the turnaround, no one in the city seemed to care. The team made the playoffs in 2014, yet they were last in attendance at 79%. They are one of the few teams where, even when the team performed well, attendance stayed near the bottom.

This isn’t the late 90s/early 00s any more. Fans in Denver have fallen off the bandwagon, and have yet to come back to a team with young stars like Gabriel Landeskog and Nathan MacKinnon. Attendance is near the bottom of the league every year, and getting a ticket to a game is as easy as walking up to the box office minutes before puck drop.

When your team has only played in two playoff series in 15 years, it would make sense why people haven’t fully jumped on board with the game. The ones who do support the team are a very supportive group, but the numbers clearly show that there won’t be a dedicated fan base until the on-ice product becomes consistently better.

You’d think the Islanders would be higher on this list. But alas, there just isn’t a major interest in the team. Many attributed it to the dumpy Nassau Coliseum, but the move to Brooklyn hasn’t helped at all. Heck, even the season that celebrated the final year of a historic arena couldn’t draw consistent sellouts, and the Islanders were a playoff team. New York is a Rangers town, and it shows.

Of the three California-based NHL teams, Anaheim ranks the lowest in average attendance, and it’s not even close. The Ducks have been one of the better teams since the year-long lockout of 04-05, but they just can’t draw the support in Anaheim. The Ducks are a great team and organization that the fans in the city don’t deserve.

For a southern market with as much success as the Lightning have had, to see them in the bottom third of the rankings is somewhat surprising. Fans show up to the games, but it’s never really been a tough ticket to get. Outside of those in the arena, there really isn’t much in terms of support.

The Blues have been one of the better teams in the Western Conference for the past few seasons, but the TV ratings just aren’t that great. Social media engagements aren’t much better, either. What keeps them out of the bottom 10 is the attendance numbers.

Yes, more fans are showing up to games as well as buying the merchandise, but that only started happening once the Kings became Stanley Cup Contenders, including two cup victories. They are a hot ticket now, but what happens when/if they fall back to obscurity? At least the social media side of things are pretty fun.

The Senators are the lowest Canadian team on this list, and it’s because they really don’t have much support outside of the local area. The attendance is good, but the social media activity isn’t high at all, and the demand just really isn’t there.

The Sharks are the highest placed California team. Attendance has been over a 17,000 average for years in the Shark Tank, and the fans in Northern California have been supportive of the team in every way possible. TV ratings aren’t there which brings the team down into the bottom half of the league.

When you think of a non-traditional hockey market having success, you often think of Nashville. They have been consistently good on the ice, and the fans buy the jerseys, the hats and the shirts. Hockey is growing in the Music City with attendance rising in five of the last six seasons.

Washington is a market that is growing year-over-year, but still has work to do to be considered one of the very best in the league. Fans show up and are very supportive of the team inside the arena, but it wasn’t until the 2008-09 season where the team started averaging more than 16,000 per game.

This is the ranking that is expected to draw the most ire amongst fans. Bruins fans may have you believe that they are the best in the league, but they are a fan base that, when the times are tough, stay away from the arena and don’t talk about the team much. Look no further than 2006-2008 for proof of that.

The Penguins have the benefit of having some of the best players in the game, making it obvious that fans will show up. But what would happen if they weren’t there and the team wasn’t as good as the last decade? Will they disappear again?

Going to a game at MSG is very expensive, one of the highest priced events in the league. The arena is often sold out, but sometimes doesn’t fill up to capacity during the week. Fans are very vocal on social media, but often appear quiet inside the arena. The type of fans that can afford games are much different than what you see online.

Sabres fans may not be happy with being outside the Top 10, but they should be proud with being this high. They showed up during a brutal two-year stretch of “suffering”, and even continued to grow in terms of social media. Not many teams would have as many fans show up as the Sabres did during such a stretch, but Buffalo did and that’s to be commended.

Like the Red Wings in the playoffs, Detroit fans will always show up to Joe Louis Arena. With two decades of constant postseason appearances, Detroit has built up a national following unlike any other in the United States.

Flames fans have supported this team whether they were a lottery or playoff team. The excitement during their Cinderella run in 2015 was hard to match by any fan base. Only thing that keeps them from being even higher is that they have a pretty quiet social media community.

Flyers fans are a crazy bunch. They are some of the most vocal in all of the league, and their passion knows no bounds. They travel well, and show up whether the Flyers are playing great or terrible. 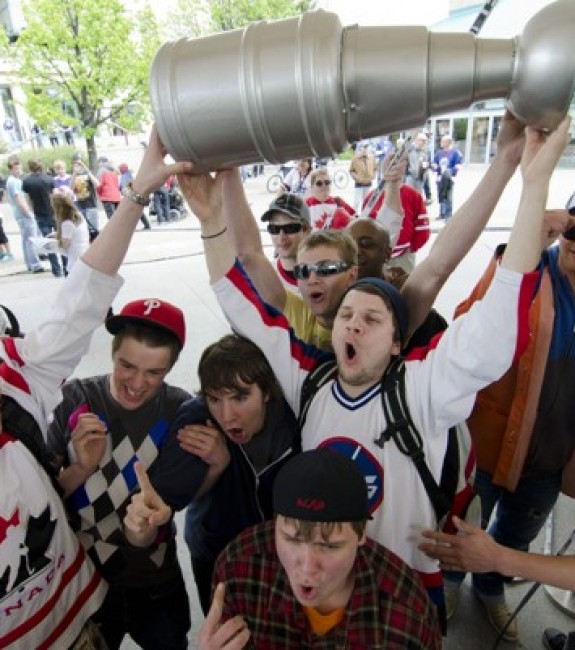 Does this really surprise you? Winnipeg was starving for an NHL team for 15 years. The return of the Jets has only been a positive thing for the city despite the fact that they haven’t been great since returning. Fans just don’t care. They have the NHL and that’s good enough…for now.

Say what you will, but the Minnesota Wild fans live up to the moniker of being from the “State of Hockey”. Packing the XCEL Energy Center each night while being as loud and boisterous as possible. Fans love the Wild, and it’s clear with the team being the highest attended pro team in Minneapolis.

For a team that hasn’t made the playoffs in almost a decade, the Oilers still get some pretty great support. Games consistently sell out, and jerseys are purchased at a pretty high rate. With a new arena coming, as well as that Connor McDavid kid, the excitement and interest in the team should only go up.

Yet another Canadian team in the Top 10 (shocking), Canucks loyalists have supported their team throughout everything over the past five years. Sure, there were the riots in 2011, but that represents just a small number of fans in Vancouver. From merchandise sales to ticket numbers, Vancouver deserves to be in the top five.

Even if they like to throw their jerseys on the ice, Leafs fans are so dedicated that they will go out and buy a new the very next day. With the team being in a full rebuild, the stands continue to be full for Toronto each and every night.

Some say Toronto may be the biggest Canadian hockey city, but the numbers show that Montreal is the mecca of Canada hockey. Canadiens fans are some of the most vocal on all forms of social media, and they continue to make tickets nearly impossible acquisition. Oh, and it’s impossible to walk through Montreal without seeing fans in Habs gear.

Yes, the Blackhawks have been winning a lot but that doesn’t mean they can’t have the best fans in the league. Blackhawks fans fill up the United Center to the point that it’s close to breaking fire code. Everyone wants to get in, making tickets one of the hardest gets in the league.