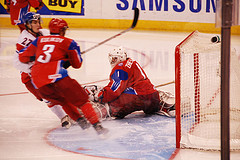 9. Dmitry Kulikov – Moscow, RUS – 6’1″ – 195 lbs – QMJHL – Drummondville – D
One-Timer: Deadly on the powerplay, Kulikov displays tremendous hockey sense and vision. The offensive d-man is exudes great confidence as well, helping him acclimatize rapidly to the North American brand of hockey. The talented puck-moving blueliner also boasts a great shot and is an excellent passer. Interestingly, at this year’s WJC he was a cast in more of a shutdown role and adapted nicely to what was asked of him.

International Tournaments: As noted above, he was cast as a shutdown defenseman, but still managed to register 4 assists.