The NHL Entry Draft doesn’t always shake out the way the experts expect. Yesterday, yours truly chronicled the 10 best draft picks made by the San Jose Sharks in the sixth round or later. Just like late round picks can surprise in a good way, early round picks can surprise in a bad way. The following players are the 15 worst first and second round selections in the history of Team Teal.

Despite being just 28-years-old, Devin Setoguchi’s NHL career looks to be over. While he once scored 30 goals on Joe Thornton’s wing back in 2008-09, Setoguchi’s quick rise to stardom was matched by his equally fast fall from grace. Setoguchi failed to come close to his 31 goal, 65 point career season in the years to follow.

The Alberta native notched just 36 and 41 points the next two seasons with the Sharks before being traded to Minnesota in the Brent Burns deal. With the Wild Setoguchi tallied 36 and 27 points in two seasons before moving onto Winnipeg. Setoguchi lasted just one year with the Jets, posting another disappointing 27 points in 2013-14. This past season Setoguchi was back in his native Alberta. Unfortunately for him he only appeared in 12 NHL games for Calgary. Setoguchi went pointless in those 12 games and was demoted to the AHL Adirondack Flames.

All told, 249 points in 471 NHL games isn’t a bad career per se. If we are talking about a middle round pick, that is a solid NHL career,much more than a cup of coffee; some good offensive production. However, Setoguchi was taken eighth overall in the draft. The Sharks traded up to get him, passing on some guy named Anze Kopitar who went 11th to the Kings.

Vlastimil Kroupa played all but two of his 105 NHL games with the Sharks. The Czech defenseman picked up 23 points in his brief NHL career before moving onto play back in his native homeland. While he didn’t pan out long term for the Sharks, the fact he played over a seasons worth of NHL games is better than the rest of the second rounders on this list.

Jeff Jillson’s career numbers as an NHL defenseman aren’t that far off from Kroupa’s but more was expected out of him as a first round pick. Just 41 points in 141 career games was certainly an underwhelming career for such a high draft choice. There were rumors during his career that Jillson didn’t have the best work ethic nor offseason eating habits and training regimen. He played in parts of just two seasons with the Sharks before being traded to Boston.

Peter Roed never reached the NHL, but at least the American born center played two full seasons for the Kentucky Thoroughblades of the AHL. At the time that was the Sharks’ AHL affiliate, so Roed was at least getting experience with the North American game for a Sharks affiliated team. Some of the other second round choices later on this list never even left Europe.

Like Roed, Dan Spang never played in the NHL but spent multiple seasons with the Sharks’ AHL affiliate. Spang played for the Worcester Sharks during the 2006-07 and 2007-08 seasons. The Boston University product scored 31 points from the blue-line for Worcester in 2007-08 despite never appearing in the NHL.

A huge hulking defenseman at 6’7″ 235, Taylor Doherty was supposed to be the next Douglas Murray type bone cruncher. It hasn’t worked out that way though as Doherty has spent four full seasons with the Worcester Sharks without once even being called up or playing in an NHL game.

Two defenseman taken in the second round in 2009 and neither has come that close to making an NHL impact. William Wrenn was taken even higher than Doherty but didn’t play nearly as much in the AHL. Wrenn has bounced around from the AHL and the ECHL, playing only three games with Worcester.

Czech native Lukas Kaspar appeared in just 16 NHL games, all with the Sharks. He chipped in two goals and two assists in 13 games in 2008-09 which doesn’t sound terrible for a rookie but that was the last we saw of him in the NHL. Since then he has played mostly in the KHL over in Russia. Kaspar is certainly one of the worst first round picks the Sharks have ever made.

Defenseman Ty Wishart only played 26 NHL games in his incredibly brief career. In 2008 Wishart was sent to Tampa Bay as part of the package that brought Dan Boyle to San Jose. Wishart though would only go on to play five games with the lightning in 2008-09. He played 21 more games with the New York Islanders over two seasons. Wishart is one of the many poor defense selections the Sharks have made in the early rounds of the draft.

Gabryel Boudreau is re-entering the 2015 NHL Entry Draft after not being signed to a contract. He suffered an injury and hardly played in 2014-15 after having a hugely disappointing 2013-14 season in the Quebec league. After putting up 63 points in 67 QMJHL games in 2012-13, the left winger tallied only 35 the following season in the same amount of games.

Tero Maatta never left his native Europe. The Finnish defenseman played in the SEL and the SM-liiga, but never in North America.

Like Maatta, Nikolov was a defenseman that never left Europe. 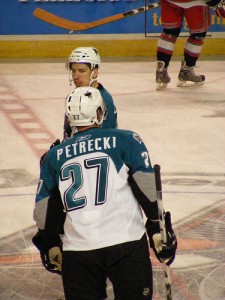 One might question why Petrecki is considered a worse pick than Wishart. The latter was drafted earlier in the first round and never played for the Sharks. However, Wishart was at least considered a talented enough prospect to be packaged in the deal that brought the Sharks Dan Boyle. Wishart’s 26 NHL games trumps Petrecki’s one game in the NHL. That’s right, Petrecki played just one game for the Sharks during the 2012-13 season. Another guy who was supposed to be a physical defenseman capable of that Murray like role, Petrecki never panned out. He is without a doubt one of the biggest first round busts in Sharks history.

Mike Morris is one of two first round picks in Sharks history to never play a single NHL game. The Massachusetts native only played in 26 AHL games after leaving Northeastern University. The right-handed shooting forward is saved from being the biggest first round bust in Sharks history by only one other player.

Nearly a top-10 pick, Finnish native Teemu Riihijarvi never played a single game in North America. The right winger has never even lit up the European leagues, posting a career high of 18 points in 50 games.