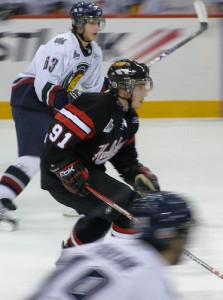 One-Timer: Paradis notched 50 points in 66 games and was a plus 20 last season for Shawinigan. He won the hardest shot competition at the Top Prospects game. His coach, Eric Veillieux, thinks he was one of the best hitters in the QMJHL. He has been described as a slightly less talented Jordan Caron. He does have good size, is a good skater, and it is not afraid to go to the tough areas to score goals. He is very responsible defensively, but he also possesses good offensive upside.

International Tournaments: Paradiscompeted with Team Quebec at the 2008 World Under-17 Hockey Challenge.