Playoff hockey is played at an entirely different level.

The veteran players really ramp up their game for the postseason. Everything happens a little faster. There is a little less time and space.

It’s not a myth, nor is it overblown. That’s a reality.

As such, it is a huge adjustment for the league’s young guns. Every spring, some of them struggle to stay afloat when the going gets tougher.

It really is sink or swim, feast or famine in the playoffs. The sharks are swarming and the lions are out to eat their young.

Jonathan Drouin is surviving just fine in Tampa Bay — well, aside from getting destroyed by Thomas Hickey — but he was also well rested and had plenty left in the tank after sitting out more than a month. 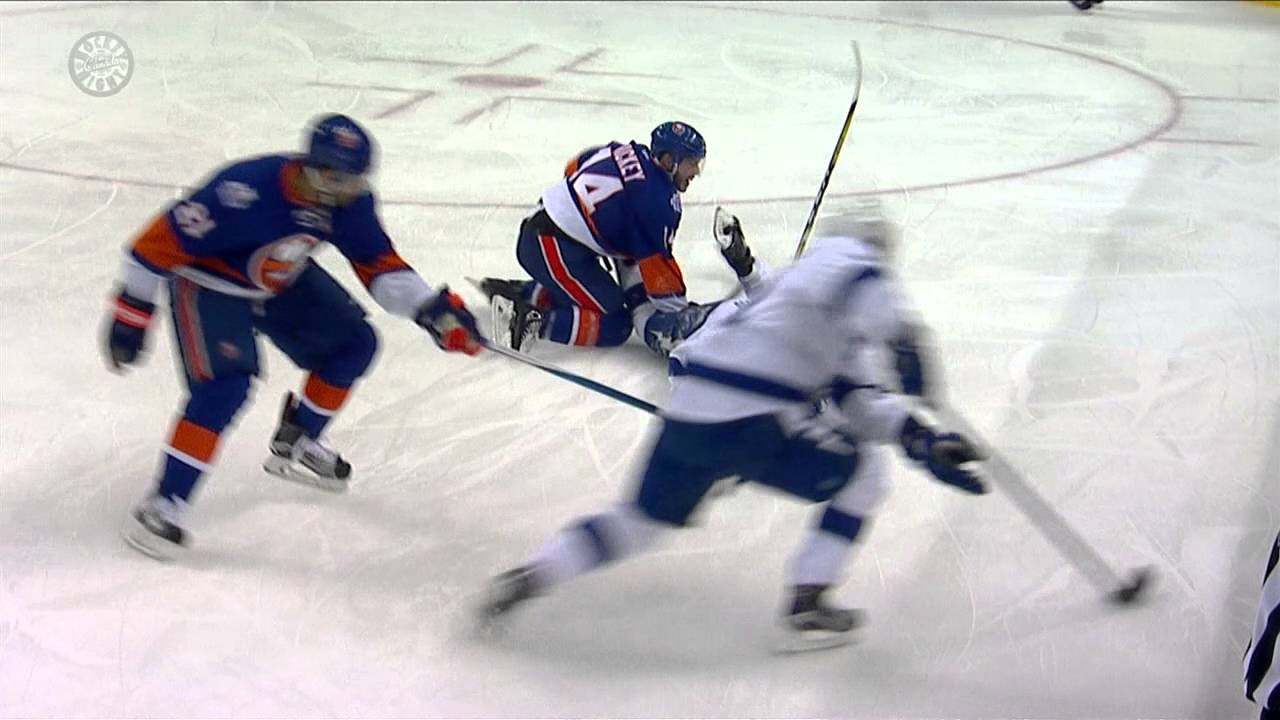 Robby Fabbri has been rising to the occasion for St. Louis too, which speaks volumes about his potential to be an impact player in the years to come.

In saying that, it’s important not to give up on the struggling youngsters going forward. Some have seemingly hit the wall following the regular-season grind, while others are simply spinning their tires unable to gain any traction.

Here are five budding stars who became playoff busts but are bound to bounce back:

His 77-point breakout season was no fluke, but he ran out of gas in the second half and had nothing left for the playoffs. Kuznetsov netted 20 regular-season goals but none after March 1. He managed only one goal and one assist in 12 post-season games.

The power-play marker that Kuznetsov did get came off a fortunate bounce, with the puck landing on his stick in the slot to give Washington a 3-1 lead in a 6-1 victory over Philadelphia in Game 3 of their first-round series. Kuznetsov was a non-factor in the second round against Pittsburgh — even more so than Sidney Crosby, and even after Barry Trotz tried to spark Kuznetsov by playing him between Alex Ovechkin and T.J. Oshie on the top line for the final two games.

The Presidents’ Trophy-winning Capitals bowed out to the Penguins in six games, but Kuznetsov’s season isn’t over yet. Both he and Ovechkin were added to Russia’s roster for the world championship tournament taking place back home in St. Petersburg.

If the worlds were being held anywhere outside of Russia, Kuznetsov would have been better served by an extended break and a relaxing summer. The soon-to-be 24-year-old will need to continue to work on his cardio and learn to pace himself for the postseason but, not to worry, Kuznetsov is going to be a stud and could be a perennial top-10 scorer in the regular season.

If he could have contributed something, anything, in the playoffs, Chicago might still be pursuing a repeat championship. Teravainen was invisible in that first-round exit to St. Louis, getting limited to one assist and 13 shots over the seven games.

He’s capable of so much more, and the Blackhawks needed Teravainen to step up in order to go on another run. He was actually better in last year’s playoffs, producing four goals and 10 points in 18 games. Rookie sensation Artemi Panarin didn’t skip a beat in the postseason, but Teravainen was nowhere to be found this time around.

They're going to have to put Teuvo Teravainen on milk cartons if he doesn't start to show up soon. #Blackhawks

Did Teuvo Teravainen play in that game 7? Because I don't remember a single shift from him

Teravainen’s first full NHL season was a disappointment in general — falling short of expectations with 13 goals and 35 points in 78 games. Big things are anticipated from this talented Finn, who was an all-star in leading his country to the 2014 world-junior championship.

In Teravainen’s defence, he’s been buried down Chicago’s depth chart and spent most of this campaign in a third-line role. He did little to work his way up, but some have suggested a change of scenery for the first-round pick from 2012 who will turn 22 in September.

Could the Blackhawks trade Teravainen this offseason, perhaps to bolster their defence or maybe for another underachiever like Edmonton’s Nail Yakupov? Anything is possible, but Chicago would be selling low with a good chance of regretting that move.

Speaking of trade bait, it wouldn’t be surprising if the Islanders were shopping Strome at next month’s NHL draft. He hasn’t panned out in Long Island, nor in Brooklyn — spending more time in the press box and coach Jack Capuano’s doghouse. Strome even did some time in the minors this season, getting demoted for not buying into his role on the team.

In the playoffs, Strome lost his prime spot on the top line with John Tavares and Kyle Okposo to little-known Alan Quine and unheralded trade-deadline acquisition Shane Prince. Strome was a healthy scratch for three of the Islanders’ 11 post-season games, but his stat-line still flashed potential for the future with one goal and four points in the eight games that he did suit up for.

Strome actually scored what stood up as the game-winning goal in New York’s playoff opener — a wild 5-4 victory over Florida — but he couldn’t build any momentum off that. By Games 5 and 6 of that first-round series against the Panthers, Strome was banished to the press box. He returned to the lineup for Game 1 against the Lightning and recorded two assists in a 5-3 win that wound up being New York’s only triumph over Tampa Bay, bowing out with four straight losses from there.

Strome’s regular-season showing was perhaps more concerning. He only scored eight goals and 28 points in 71 games, which was a significant regression in his second full season. He’s been in the big league for three years now — starting out relatively strong with seven goals and 18 points in just 37 games as a rookie before taking a big sophomore step with 17 goals and 50 points in 81 games last season.

Strome was looking like a lock in New York’s top-six forwards, but now it appears that Capuano has no clue where to play him. Is he a centre or a winger? Where does he go from here? Strome is certainly testing Garth Snow’s patience at this point, and there will be teams calling about his availability in the coming weeks.

Trade speculation will pick up in the lead-up to the June 24-25 draft weekend, and it wouldn’t be shocking if Arizona expressed interest in the fifth overall pick from 2011 who turns 23 in July. The Coyotes drafted Strome’s younger brother, Dylan, third overall last year, so that reunion might be enticing to rookie GM John Chayka — and Snow might try to fleece the newbie who only turns 27 on June 9. Keep an eye on that.

Here’s another name that could surface in trade rumours. Heading into tonight’s Game 7 against St. Louis, Nichushkin had all of one measly assist and 10 shots in nine playoff games. That’s not good, especially not for a guy touted as a goal-scoring machine. Like Strome, Nichushkin had been a healthy scratch on three occasions through the first two rounds and wasn’t accomplishing much when he was in the lineup.

Valeri Nichushkin is a scratch.Travis Moen will skate on the fourth line.

Again like Strome, Nichushkin was expected to play in the Stars’ top-six this season — flanking either Jamie Benn and Tyler Seguin on the first line or Jason Spezza and Ales Hemsky on the second unit. That was the plan on paper. However, Nichushkin has been a fourth-line fixture for the most part, which has held him back a bit, but he hasn’t been pushing forward to force Lindy Ruff into a better opportunity either. Another big-bodied youngster, rookie Radek Faksa, has done just that in earning his coach’s trust and getting rewarded as a result.

There’s still lots to like about Nichushkin — he’s 6-foot-4 and 205 pounds at 21 years old, skates like a freight train for a big man and boasts a heavy shot too. He’s the prototypical power forward. Yet, that total package translated into only nine goals and 29 points in 79 games during his sophomore season. That was down, slightly, from Nichushkin’s rookie totals of 14 goals and 34 points in the same number of games.

Perhaps he was snakebitten to some extent — Nichushkin did increase his shot total from 128 to 139, which is a sign of positive progress — but that won’t stop teams from phoning up Jim Nill to inquire about acquiring the 10th overall pick from 2013. He’s still finding his way in Dallas, but could Nichushkin find his way out if the right offer comes in? The Stars could use another top-four defenceman with Alex Goligoski and Jason Demers destined for unrestricted free agency, so a blue-liner like Winnipeg’s Jacob Trouba — the ninth overall pick from 2012 — could be very tempting. Or maybe, just maybe Nill would go for the home run in a swap of enigmatic Russians, taking 2012 first-overall pick Yakupov off Edmonton’s hands. More food for thought.

Lastly, this is a guy who keeps ending up on these kinds of lists. Granlund has (or had) sky-high potential coming into the league but, four years later, he’s still leaving everyone wanting more. Thus the past tense reference, with some now wondering whether Granlund is what he is — and not the point-per-game, top-line talent that he was hyped up to be.

Where has this been for Granny in a Wild sweater…? #Silky https://t.co/S1F1BlPTN6

With Zach Parise and Thomas Vanek sidelined for the playoffs, this was Granlund’s chance to make that Minnesota team his own — to be the Wild’s go-to guy. Instead, he disappointed yet again with only one goal, three points and a minus-2 rating in a six-game loss to Dallas. Granlund did generate decent shot volume, with 22, but the Stars were experiencing shaky goaltending and Granlund was unable to light up his fellow Finns Kari Lehtonen and Antti Niemi.

That’s not entirely surprising given Granlund’s ongoing mediocrity in the regular season. He played all 82 games for the first time this season and recorded career-highs across the board with 13 goals, 44 points and 160 shots. Mediocre career highs, though, for a player of his stature as the ninth overall pick in 2010. By now, Granlund should have been good for 20 goals and 60-plus points. At least that’s what everyone thought a few years back.

Maybe Bruce Boudreau can make Mikael Granlund become the hockey player all #Wild fans have been waiting for.

Going forward, it’ll be up to Bruce Boudreau to get the best out of Granlund. That will be one of the challenges for Minnesota’s new coach, finding ways to push the right buttons in order to tap into Granlund’s immense potential. Better late than never if that comes to fruition.

Regardless, it’s too early to start pushing the panic button on any of these players. Kuznetsov is obviously going nowhere — he could supplant Nicklas Backstrom as Washington’s full-time first-line centre next season — but the other four could very well end up moving to new teams before realizing their potential.

Still, the upside remains promising for Teravainen, Strome, Nichushkin and Granlund as well. This offseason will be interesting and next season will be telling for each of them. Stay tuned!