It was a very busy weekend in the fledgling 1966-67 hockey season. The National Hockey League saw a full slate of six games, While seven games were played in the American Hockey League, three in the Western Hockey League and five in the Ontario Hockey Association Junior A Series.

Habs, Hawks Off to Fast Starts

The Stanley Cup champion Montreal Canadiens and Chicago Black Hawks both served notice to the rest of the NHL that they will be forces to be reckoned with this season. Montreal took a pair of wins from the vastly-improved Boston Bruins while the Chicago six waltzed to a pair of victories over the defensively-poor Detroit Red Wings.

The other two NHL teams, Toronto and New York, also played a home and home series, with the Rangers blanking the Leafs 1-0 at home after the clubs battled to a 4-4 tie in Toronto on Saturday.

Veteran Jean Guy Talbot scored the winning goal for Montreal last night with just over two minutes to play in a cliff-hanger at Boston Garden. The young Boston squad put in a fine game at home, and only a misplay by one of the Bruins old hands allowed Montreal to grab the late lead.

Long-time Bruins centre Murray Oliver lost a puck battle to Talbot at the Boston blue line. Talbot scooped up the loose puck and then beat Bruins goalie Ed Johnston with a lightning-quick 16-footer with just 2:05 left in the game. Talbot’s goal came while the Habs’ Jim Roberts was sitting out a tripping penalty.

Also scoring for Montreal in this one were Claude Larose and Bobby Rousseau. But the big story on this night, and possibly for years to come, was the first NHL goal by rookie defenceman Bobby Orr.

Orr put in a dominating performance and gave the Boston fans every indication that he is the real deal. His goal came at 4:13 of the final frame. The precocious freshman stepped into open ice and picked off a blind John Ferguson pass in the Montreal zone. He drilled a 55-foot screened shot through a maze of players past an unsuspecting Gump Worsley in the Montreal goal.

A frenzied Boston crowd celebrated the possibly historic goal  with an ovation that lasted for over a minute. For his part, Orr looked almost a little embarrassed by the whole thing.

Pit Martin had the other Boston goal in the first period.

The game was truly a heartbreaker for the Bruins, who at times dominated the game. Worsley had to be sensational on several occasions as the home side outshot Canadiens 31-22. His best stops came off a Johnny Bucyk drive off an Orr setup in the first and a block of a blazing shot from Bob Woytowich just before Talbot’s winning goal.

Montreal coach Toe Blake was impressed with the young Bostons after seeing them for six periods on the weekend:

They are a hell of an improved club. We knew what they were like because we saw them in an exhibition game last Sunday, and they played like fiends. We expected them to come out fast and now I’m glad the game is over.

Meanwhile in Chicago, the Detroit Red Wings dropped their third straight game of the young season by a 4-1 score to the powerful Chicago Black Hawks. The Wings had lost on Saturday to the Hawks 7-4 after being beaten by Boston on opening night 6-2.

Detroit coach-general manager Sid Abel wasn’t about to wait for his men to come around and made numerous lineup changes prior into last night’s contest. He brought up defenceman Bob McCord and left wing Ab McDonald from the Pittsburgh Hornets of the American Hockey League, and started Hank Bassen in goal for Roger Crozier. Bassen played well, but was unable to stem the onslaught of the vaunted Chicago offence.

Abel told reporters after the game that he will be conferring with Wings owner Bruce Norris about possible trades he has in mind. Abel has been vigorously pursuing retired Toronto defenceman Carl Brewer to shore up the blue line. Toronto manager Punch Imlach has been insisting on at least two NHL players for Brewer, with names like Norm Ullman and Paul Henderson being mentioned.

As they did in in Saturday’s game, Detroit jumped out to a 1-0 first period lead. Call-up McDonald scored the opening goal at 4:36 of the first. However Chicago took over the game in dominating fashion after that. Doug Mohns netted his first of the year six minutes later and Dennis Hull’s third came five minutes after that.

Kenny Wharram made it 3-1 with the second period’s only score. Doug Jarrett rounded out the night’s offensive activity with a third-period marker.

Chicago outshot the Red Wings 36-22, and it was only Bassen’s fine work that kept the final result respectable. 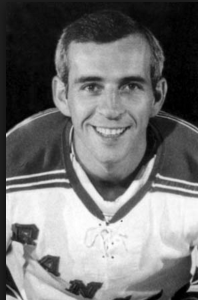 New York Rangers goalie Ed Giacomin stopped 24 Toronto Maple Leafs drives for his first NHL shutout as the Rangers edged the Leafs 1-0 at Madison Square Garden. It was a fine rebound performance for the second-year netminder, who surrendered six goals in his opening night assignment against Chicago.

New York defenceman Wayne Hillman broke a tense scoreless tie at 7:14 of the third period. Hillman beat Leafs goalie Johnny Bower with a wicked slap shot from about 10 feet inside the Toronto blue line. Hillman had taken a fine setup from Red Berenson and fired a low shot that caromed off a Toronto skate to the top corner of the net. Bower had no chance.

Louis Cauz of the Toronto Globe and Mail described the game as “sloppily played” in which New York out-muscled the Leafs. That’s something recent Ranger clubs had rarely accomplished against their NHL competition and signals a change in the New York style of play.

Chicago Black Hawks all-star goalie Glenn Hall, who said he had retired prior to training camp, has apparently reconsidered. Chicago coach Billy Reay told reporters that Hall has agreed to terms and will report to the Black Hawks some time this week.

Reay feels Hall will be ready to step into the Chicago lineup almost immediately:

This is very bad news for the rest of the NHL, given the Chicago squad’s fine showing in the season’s first week. Hall has been a member of the NHL’s first or second all-star teams in each of the past nine seasons. He was unavailable for comment.

In the marquis American Hockey League game last night the Quebec Aces edged the defending Calder Cup champion Rochester Americans 4-3 at Rochester. The Americans blew a 3-1 lead on their home ice before over 5,100 fans.

It was a rough weekend for Amerks goalie Bobby Perreault, who has faced over 70 shots in the last two games he played. Rochester coach Joe Crozier was displeased with his defence, especially the tandem of Duane Rupp and Don Cherry.

The Buffalo Bisons have finally won their first game of the AHL season. Larry Wilson had a goal and two assists to lead Buffalo to a 6-4 win over the Cleveland Barons at Memorial Auditorium in Buffalo.

Buffalo scorers were Wilson, Billy Dea, Brian Smith, Wayne Larkin, Dennis Kassian and Greg Pilling. Bob Courcy had a pair for the Barons, with Tom McCarthy and Cec Hoekstra adding the others.

Young Dave Kelly played well in a losing cause between the pipes for the Blades.

The Canadian Amateur Hockey Association has suspended Frank Boucher, the commissioner of the maverick Canadian Major Junior Hockey League. The CAHA also amended its regulations in an effort to entice CMJHL players to return to the CAHA fold.

CAHA president Fred Page said the association had voted to uphold suspensions for players and governors of the new league, but that they had agreed to revoke suspensions of players who wished to join teams under the CAHA umbrella.

The CAHA referred to the players in the CMJHL as “innocent victims” who have been taken advantage of by the team owners of the new loop. The CMJHL has teams in Edmonton, Calgary, Regina, Moose Jaw, Saskatoon, Estevan and Weyburn.

In a telephone interview with the Canadian Press, Boucher said that he was pleased to be suspended by the CAHA. He said the move was an attempt by the CAHA to break up the new league.

One of the major issues that the CAHA has with the CMJHL is that the league plans to act as the agent for all of its players who turn professional. The CMJHL will negotiate all professional contracts with NHL or other pro teams that wish to sign graduating juniors.