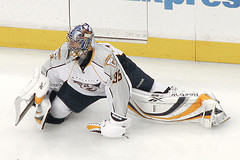 One-Timer: This classic late-boomer goalie prospect, who has come out of nowhere this year, has actually been passed over in the past three drafts. This year, however, Koskinen should be hearing his named called and likely in the second round. For the Espoo Blues of Finland’s top league in 33 games, he posted an impressive 1.91 goals-against average and .931 save-percentage.  Obviously, given his size, his “biggest” asset is just that and with his hybrid style, he seemingly covers the whole net. He does anticipate the play well, but will need to further work on quickness.