It’s no secret that the Toronto Maple Leafs are loaded with draft picks heading into the 2016 NHL Entry Draft.

In fact, at the moment, the Leafs currently hold on to an incredible 12 selections, eight of which are poised to fall in the first four rounds of the event, scheduled to be held at the First Niagara Center in Buffalo, June 24-25th, 2016.

In the first round, not only will they possess, in all likelihood, a top-5 selection, but the Leafs will also receive Pittsburgh’s pick given they reach the Stanley Cup Playoffs, a condition applied in the Phil Kessel trade. Next, in the second round, the Leafs hold their natural pick, which will fall in the 31-35th overall range, as well the Washington Capitals’ pick, which was acquired in the Daniel Winnik trade.

Although this secondary selection in the second round will fall in the 50-60th range overall considering the strength of the Capitals this season, this pick may in fact turn out to be Toronto’s most important in the entire draft. Given the direction of their rebuild, and more particularly their emphasis on drafting speed and skill over size, there is one player in particular who the Leafs must focus on drafting, as his style of play epitomizes Toronto’s desired style of play and direction as a team.

The second overall selection in the 2014 OHL Draft, Mascherin enjoyed a relatively successful rookie season before breaking out in his second season with Kitchener.

At just 5’9″, Mascherin has room to grow, yet he more than makes up for this deficiency with his strength on the ice. Weighing in at 200 pounds, Mascherin has made a personal commitment to his off-ice strength training, a desire to improve which has allowed him to not only fend off heavy checking and often bigger bodied opponents, but to also better protect the puck in the offensive zone.

It is his skilled puck protection which has helped lead to a drastic increase in his offensive output. Given his ability to create time and space for himself, Mascherin’s key offensive trait can be much more easily utilized, which is his amazing shot. Not only does he possess a quick release, but his shot is of tremendous velocity, and has the ability to both surprise and straight up beat opposing netminders. 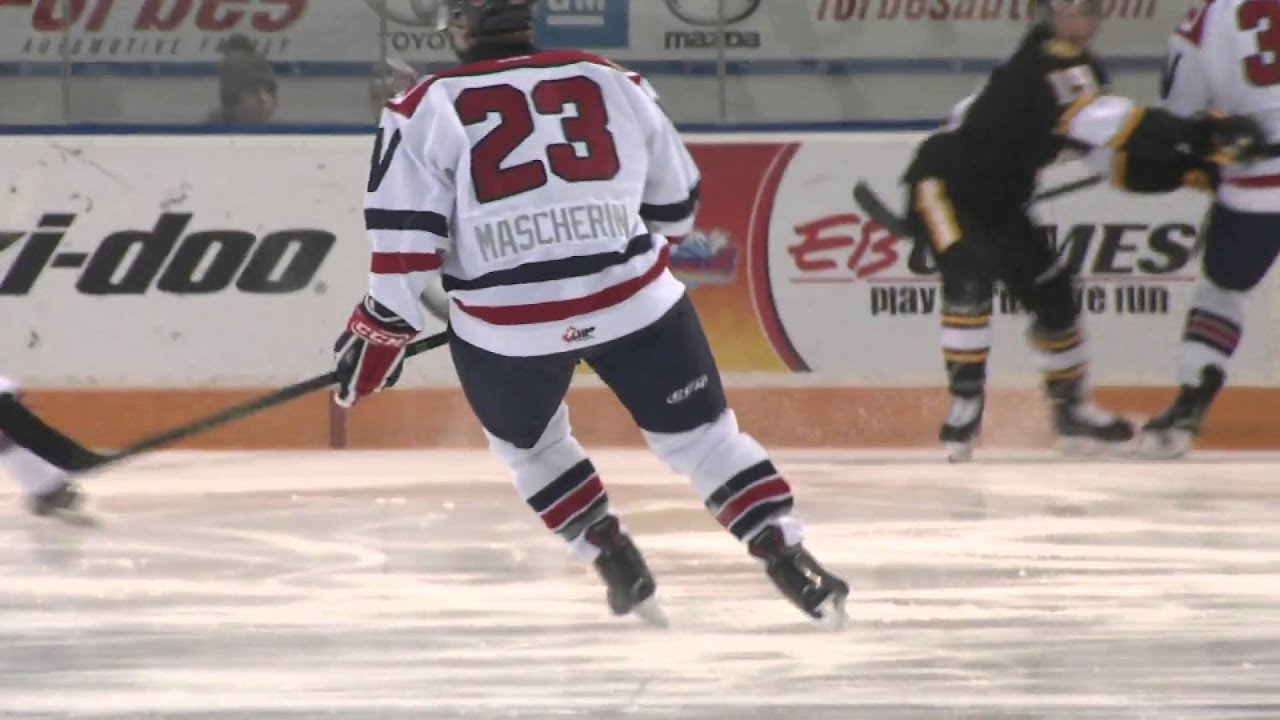 One often forgotten skill of Mascherin’s game, often overshadowed by his strong shot, is his ability to pass the puck. Given the need for opposing teams to respect his elite shot, this more than often leads to increased passing opportunities, allowing Mascherin to outlet the puck and find his teammates in high percentage scoring situations, an ability which also showcases his high hockey awareness and intelligence.

In recent times, the trademark of the current Leafs rebuild has been an emphasis on acquiring players of elite skill, despite their potential lack of stature. No better examples lie elsewhere than in Mitch Marner and William Nylander, two players who were both top-10 NHL draft selections and are expected to be major pieces for the Leafs in the near future.

Since, the Leafs have added additional pieces of a similar makeup, namely Nikita Soshnikov and Brendan Leipsic, while more recently they acquired Connor Carrick.

In Mascherin, the Leafs have the potential to add yet another highly skilled player to the mix, and one that could certainly become an incredibly important building block in Toronto’s future.

Not only does he have the skill, ability and experience, as we have already seen, but Mascherin also retains a solid mental makeup, and one which conforms directly to what Head Coach Mike Babcock demands from his players.

As seen in the video above, Mascherin is incredibly mature despite his young age, and is well aware of the pressures which come alongside seeking success in your draft year. Regardless, Mascherin is laser focused in on a number of goals, and has already begun to set himself apart from his colleagues, following a strict work-out regiment as well as, quite importantly yet very simply, going to bed early, something which is extremely difficult for those in their teenage years.

It is this combination of skill, work ethic and determination which have led to Mascherin’s success to date, and undoubtedly will lead to considerable success in the future.

Not only has he shown tremendous ability on the ice, while potentially fitting perfectly into the Leafs’ current rebuild, but his off-ice determination has thus far been equally impressive, a combination of which is highly desirable in the NHL.

With a wealth of picks in the coming draft, the Leafs will surely be particular in terms of those they chose to select. Yet, if they wish to acquire, no, steal, and incredible prospect who will surprisingly be selected in the late second round, Mascherin is their man, as he could become an essential player in the Leafs rebuilding process.