With the NHL draft a little over a day away, trade talks and speculation are running absolutely rampant. Teams are debating which players they want to target and just how much they will have to give up in return. There are tough decisions ahead that every team will have to make in order to get better.

The Pittsburgh Penguins have been very active on the trade market recently. After an early exit from the playoffs at the hands of the New York Rangers, the Penguins are looking to make some sort of deal in order to bolster their chances for success next year and into the future. They are considering all players, reportedly including the Toronto Maple Leafs scoring winger Phil Kessel.

PITT targeting Phil Kessel as one of 4 or 5 scoring forwards that interest them. Everybody wants young Penguin D.

What Could Kessel Provide for the Penguins? 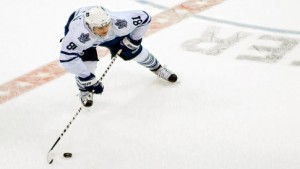 Pittsburgh already possesses a host of scoring forwards including Sidney Crosby, Evgeni Malkin, Patric Hornqvist and Chris Kunitz. Adding a proven sniper into the mix like Kessel could have huge benefits for the squad. His career best in goals for a single season is 37. He managed to snipe all of those without playing with a true number one centre.

Now imagine for a second if Kessel were to occupy the wing of Crosby or Malkin. Having either of those dynamic players dishing you the puck on a regular basis could mean that Kessel not only hits the coveted 40 goal plateau, but that maybe even 50 is in the realm of possibility.

James Neal, now on the Nashville Predators, spent time as Malkin’s linemate for a few seasons. In 80 games he was able to put up 81 points including 40 goals. That came in 2011-12 and has been is best season to date. Pittsburgh has two elite players down the middle that contribute to their lethal offence. Adding in Kessel could be that final catalyst to push them over the top.

What Would the Penguins Have to Give Up?

Paying for a player of Kessel’s calibre is no easy feat. He came with an expensive price tag that is not the easiest thing to match. If Jim Rutherford and company hope to acquire the vaunted sniper, they are more than likely going to have to part with some of their young prospects.

The Penguins are particularly set on the blueline where they have Olli Maatta, Derrick Pouliot and Scott Harrington. Most, if not all NHL teams are likely interested in those players.

It will likely take more than just a straight swap of players to get a potential deal done. The Maple Leafs may need to retain some salary. There is a potentially bad contract coming the other way in the form of a Chris Kunitz or Rob Scuderi. Draft picks need to be added into the mix and considered as well.

The Penguins don’t own a first round pick in this year’s draft. They do however, possess a very valuable second rounder. The Maple Leafs, who don’t own one in this years draft, could include that on their wish list.

There is no guarantee a deal gets done. Both Pittsburgh and Toronto are looking at unique ways to improve their respective squads. The Leafs want to get younger and acquire as many prospects and picks as possible. The Pens want that proven scorer that can hopefully help them reverse their recent playoff fortunes.

If a deal does in fact occur, it is likely to shock and rock both teams as well as the NHL in general. It’s an exciting time to be a hockey fan. My advice? Don’t blink!