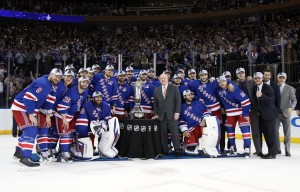 It started almost immediately after the final buzzer sounded on Thursday night. The New York Rangers had just defeated the Montreal Canadiens in game 6 of the Eastern Conference Finals, and punched their ticket to their first Stanley Cup Final in 20 long years. Before the last streamer of confetti falling from the ceiling of MSG had even hit the ice, though, the Twitter attacks began.

So are you guys getting your “A Million Ways to Die in the West” jokes ready for the Rangers?

Chicago and LA will both beat the rangers doesn’t matter who wins the series. — Steamboat Willie (@KyleArenofsky) May 30, 2014

To be sure, given the West’s recent dominance, it’s hard to see the Blueshirts as anything other than the underdog in the Stanley Cup Final (and a big underdog at that), but are they really doomed to lose? Is it really a foregone conclusion that the eventual Western Conference winner will walk all over them? Let’s dig a little deeper and see what we can find.

The Stanley Cup Final won’t be the first time this playoff season that the Rangers come into a series as the underdog. The Rangers were not given much of a chance heading into the second round, either.  After all, they were up against a much more talented Pittsburgh Penguins team, and dealing with a schedule that would see them playing back-to-back games twice in 7 days.  For a time, it seemed as if the predictions were right, and the series would indeed be over quickly. But, down three games to one, and facing the shocking death of Martin St. Louis’ mother, the Rangers suddenly came together as a team and a family. They rode a wave of emotion and completed a stunning comeback to win that series in seven games.

Anyone who has played competitive sports can tell you that emotions have a shelf life–they can provide a short-term boost, but in order to maintain momentum over the long run, a team needs something more.

For the Rangers, that something more is actually several somethings. First and foremost, it is a belief in themselves and their teammates. Nowhere was this on display more than in the comeback against the Pens. Second, this Rangers team has much more depth than prior versions. Coach Alain Vigneault has consistently rolled, and gotten production from, all four lines throughout this year’s playoffs. Third, the Rangers have no shortage of talent. Players like Rick Nash, Martin St. Louis, Henrik Lundqvist, Ryan McDonagh, Chris Kreider, etc. make sure that they always have the weapons they need on the ice. What that adds up to is a “perfect underdog”–a team that believes in itself and its system 100%, has weapons all throughout the lineup, and is peaking at the right time.

And don’t forget about Henrik Lundqvist.  He’s proven time and again that he can win games for the Rangers all on his own, and he has had 9 years to prepare for this moment. No Ranger will be more motivated than “The King”, and the Flyers, Penguins and Habs can verify that you don’t want to be facing him in an elimination game–not this year. 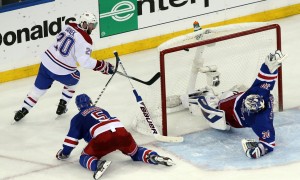 Whichever team the Rangers play in the Final will have more talent than they do. The Chicago Blackhawks are absolutely stacked with talent: Patrick Kane, Jonathan Toews, Patrick Sharp, Duncan Keith, Marian Hossa… The list almost reads like an all-star team. The Los Angeles Kings aren’t quite in that stratosphere, but the trade deadline deal for Marian Gaborik added to a roster that already had top-tier talent. Gaborik joined the likes of Anze Kopitar, Jeff Carter, Drew Doughty, and Jonathan Quick, to name a few. But a highly talented team does not automatically make for a Stanley Cup Champion. History is littered with talented teams that lost even though they were much better on paper than their opponents–just ask the 2011 Vancouver Canucks or this year’s Boston Bruins.

Of more concern for the Rangers is the fact that both Western Conference teams already have a recent Stanley Cup under their belts. This West Final pits the last two Cup champs against one another. So whoever the Blueshirts play will know what it takes to win and to hoist Lord Stanley’s hardware. Though the Rangers franchise has not won it all in 20 years, some of the core players on their roster have. Brad Richards and Martin St. Louis won the Cup together as members of the 2004 Tampa Bay Lightning (Richards won the Conn Smythe that year as well), and Daniel Carcillo was on last year’s champion Blackhawks team. The veteran presence of Richards and St. Louis should have a calming influence on the rest of the team as it enters the uncharted waters of the Finals.

How the West Will be Won

The primary thing everyone points to when predicting the Rangers’ doom is the sheer speed, strength and precision of the Kings/Hawks games. It’s a stark contrast to the Eastern Conference games, which have been much more deliberate and tight-checking. Don’t mistake stylistic differences for a lower level or inferior brand of hockey, though. Many of the Rangers games have been plodding because the Rangers defense can stifle opponents. Especially with the lead, they can put a strangle hold on opposing offenses and keep them from getting any offensive flow going. Period 3 of the final game against Montreal was a perfect example. The top line of either the Kings or the Blackhawks will be contending with Ryan McDonagh and Dan Girardi, who have made their names night-in and night-out by keeping their opponents’ best players off the score sheet.

One thing that nobody seems to understand is that the ultra-fast speed and heavy hits of the Western Conference Final games make them that much more draining physically.  Couple that with a 7 game series, and the team left standing at the end will have a lot taken out of them. The very thing that all the naysayers point to as the Rangers doom is actually playing right into their hands. The Kings and Hawks now get to punish each other for the full 7 games, with every hit taking a little more out of the eventual winner. The Rangers, meanwhile, get to rest up and get healthy while still avoiding a too-long layoff that could potentially sap their momentum.

No matter who the Rangers face in the Stanley Cup Final, they will be major underdogs. They’ll be facing a battle-tested team with more weapons, regardless of whether that team is the Kings or the Blackhawks. But all is not lost.  There’s a reason they actually play the games–and the Rangers have beaten the odds all year. No matter who they play, the Rangers will be a more rested team (that seems odd to say of the first team to ever reach the finals while playing the full 14 games in the first two rounds, but it’s true), as the winner of the West will only get two days to recover from their war. If the Kings win, they will become the only team to reach the Cup Final having played the full 21 games–and there’s no doubt they will be drained both physically and mentally. If the Hawks win, they will have finished 7 games against the team that leads the NHL playoffs in hits–they will be drained as well. Will that be enough for the Rangers? We’ll see on Wednesday night, but no matter what, this series will be much closer than the internet experts would have you believe.