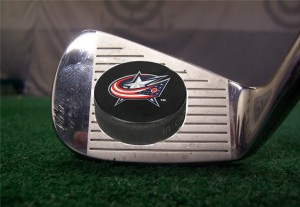 Sunday was  68-degree March day in central Ohio — a weather phenomenon that divides the mind between the skate blade and the golf club, so a golf analogy seems appropriate to use as we contemplate the recent string of success, culminating with a weekend home-and-home sweep of the Detroit Red Wings.  <pause for effect>   . . .That’s right, I said a sweep of the Detroit Red Wings.  That comes on the heels of wins over Vancouver, Edmonton & Colorado, and overtime losses to Chicago and Dallas.   Columbus is finally making a positive hit on the NHL radar as one of the hottest teams in the league, which provides an additional measure of satisfaction.

Success on the golf course depends on myriad factors — the skill to consistently put the sweet spot of the club-face on the ball, the tenacity to overcome bad stretches of play or misfortune, the creativity to find unique solutions to thorny issues and — every now and then — the good fortune to receive that fortuitous bounce or gust of wind at your back.  Ditto on the ice —  and the Blue Jackets have been demonstrating all of these qualities of late.

The 3 – 2 shootout victory in Detroit represents the fifth consecutive victory for the Blue Jackets (the longest current streak in the NHL), and the seventh straight game without a 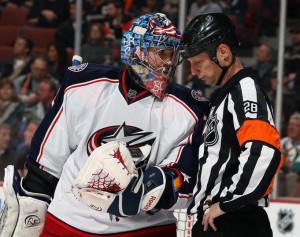 regulation loss. Yeah, I know there was some other team with a longer streak this year, but this is heady stuff for a club that started 4-10-2 over its first sixteen contests. Columbus is 4-0-1 vs. Detroit this season, clinching the season series for the first time in franchise history. Saturday’s dominant 3 – 0 shutout victory was goaltender Sergei Bobrovsky’s first NHL shutout.  Columbus is 6-2-2 over the last 10 games.  That’s sublime.Including two games where the final score was embellished by a late empty netter, 13 of the last 14 contests have been decided by a single goal, and 20 of the 26 games played fall into that category, including nine games decided in overtime or a shootout.  That’s ridiculous.Columbus has climbed to 14th in the NHL in Goals Against per Game (2.73), is tied for fifth in the league on the penalty kill (85.7%) and have the fewest giveaways in the NHL.  That’s sublime.  Through Sunday’s contest, Sergei Bobrovsky had stopped 125 of the last 129 shots faced — a .968 save percentage. That’s both sublime and ridiculous.Sure, the Blue Jackets still lag in overall scoring (26th in the NHL) and power play conversion (29th), but neither those numbers — nor the other positive statistics — tell the whole story.

Earlier in that game, the Blue Jackets ability to forecheck and capitalize on errors prompted Babcock to call an early time-out.  Really?  The Blue Jackets forcing an opponent –much less Detroit — to take a breather and gather their wits?  An opponent conceding that Columbus out worked them? These may not be your father’s Red Wings, but these are also not your older brother’s Blue Jackets.  Throughout this string, they have displayed a tenacity and willingness to persevere that fans have been seeking for a long time.  Everybody — and I mean everybody — seems to be on board, and different players are coming through at precisely the right times.  That this has come just as injuries have inflicted maximum damage to the roster is even more significant.  The Detroit sweep came without benefit of James Wisniewski, John Moore, Derek Dorsett, Brandon Dubinsky and Artem Anisimov.  No matter, for every top liner that has gone down, a Springfield import has stepped up to fill in admirably.  Prout, Erixon, Drazenovic and Goloubef have all played extremely well.  Jared Boll is finding another gear.  Ryan Johansen and Nick Foligno are dominating their shifts on the ice.  Matt Calvert and Cam Atkinson are creating havoc with their speed and skill.  Derick Brassard is bringing 60 minutes of energy, to complement his skill. Brassard ranks sixth on the club in hits — trailing only perennial leaders Dorsett, Boll & MacKenzie, newcomer Foligno and Tyutin.

Indeed, Brassard may be a good metaphor for the team as a whole.  For years, the Blue Jackets have approached the game of hockey as if it was a choice between skill on the one hand, and energy and effort on the other.  The “energy guys” on the roster could lay hits, and skate a little — but they couldn’t finish plays or pose a threat in the offensive zone.  Conversely, the skill guys could work wonders with the puck, but skated as if they were wearing “no contact” jerseys.  To be fair, at times coaches sought to impose systems that did not match up with the attributes of the talent pool.  However, the essential point remains the same — the club could not –for whatever reason — produce that alignment of effort, attitude and skill necessary to be consistently competitive.  The squad was dependent upon highly variable individual efforts — which only rarely had a positive correlation.  Not so with this team.

Let’s take Sunday’s game as an example.   This was a historical “set-up” game.  The back half of a back-to-back, on the road, a duct-tape lineup and a very angry and motivated Detroit squad.  After Vinny Prospal’s now infamous “scoreboard incident” on Saturday, you had to expect that the Red Wings would come out flying, with Datsyuk and Zetterburg leading the way.  Not so much.  The Blue Jackets stayed with the Red Wings throughout the first stanza, held Detroit to four shots on goal, and clearly had the better part of the opportunities.  Brassard’s laser in the second rang the bell, and even when Detroit came right back to tie it — a traditional momentum changer on the road — the Blue Jackets responded immediately when Zetterberg overskated the puck of a Johansen shot, and R.J. Umberger cashed in — from almost the same spot as Brassard’s. 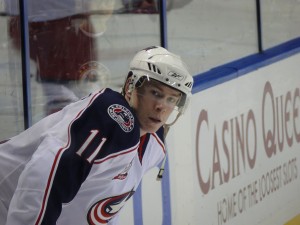 In terms of solid hockey, this was the apex of the day for Columbus, who surrendered the momentum and started taking a series of bad penalties bred of fatigue.  When Umberger was whistled for covering the puck with his hand at the end of the second —  providing the Red Wings with a 5-on-3 advantage, an air of inevitability settled in.  Sure enough, Franzen cashed in early in the third and the game was tied.  It would have been easy for the club to give in to burning legs and surrender the game, but the club stuck with the fundamentals and survived the third.  The overtime was full of chances on both sides, with Sergei Bobrovsky saving the game with a late right pad save that added to his recent highlight reel.  (This just in . . . Bobrovsky was named the NHL #1 Star of the Week for his efforts).  This got the game to the shootout , where, as we’ll see in a bit, skill took over.

In golf, you simply can’t put every shot on the sweet spot of the club.  So, victory often goes to the golfer who “controls the misses”.   So it was in Detroit.   Columbus was not at its best, sporting an awful power play and clearly tiring as the game wore on.  The worst thing a fatigued team can do is take penalties, and  the Blue Jackets took six minors yesterday, bunching five of them in the last half of the second and the beginning of the third.  Still, they found a way to get two points — despite not playing their best.  That is the hallmark of a good club.

Attitude is terrific, and effort is essential.  At the end of the day, however, those attributes only go so far.  You need the skill to get the puck where it needs to be . . . at the time it needs to be there.  While the Blue Jackets have not scorched the net with goals this season, there has been a steady improvement in scoring.  More importantly, however, they have found the skill to do the number of little things that add up to bigger opportunities.   They have learned how to pass the puck to the stick — and the clacking of tape to tape passes on Saturday was frankly stunning.  They have learned to make the simple play that renders the pretty play possible.  Keeping the puck in the zone, getting the puck deep, finding alternate passing lanes — all of these have been absent in prior years, but are there now.  Players have the speed to get to the puck — and have started winning the battles once they get there.  Patience has replaced impulse, and the results have been evident.

Anisimov has been one of the poster children for this blend of skill and grit.  Foligno another.  However, on Sunday it was largely about three “skill” guys who showed all aspects of the game.  As noted above, Brassard lasered a goal, but also battled to keep pucks alive and made a bunch of plays.  Though he did not have the .750 clip of face-off success he displayed Saturday, he facilitated possession and fostered opportunities.  Ryan Johansen and Matt Calvert used size and speed, respectively, to do the same things, and when the shoot out arrived . . . . let’s have the pictures tell the story:

Those were absolutely filthy moves, at precisely the correct time, and secured a victory few would have had the gumption to bet on.  But such has been the case of late — grit, speed, skill, attitude, creativity . . . all combining to produce results.

The Entertainment Factor . . .and Beyond

In discussions with those both deeply and casually involved in the Blue Jackets community, a common thread has emerged.  Almost universally, people agree that Columbus is displaying an energetic, entertaining brand of hockey.  There is enough skill to keep the purists intrigued, while the attitude and effort atone for some of the technical sins, and render virtually every game a taut, competetive affair.  In an abbreviated season tainted by labor strife, rife with injuries (across the league) and  — in Columbus — beleaguered by uncertainty coming in, entertainment value is high, and the Blue Jackets are starting to see the rewards at the gate and in the media.

Over the first sixteen games or so, Columbus could not get out of its own way, and when one aspect came together, another fell apart.  The lack of scoring foiled some terrific performances in goal, and some woefully soft goals torpedoed some strong offensive efforts.  Again, its no different than hitting the greens, but missing the putts.  Now, however, the club seems to be finding those greens. .  .and making the putts.  If one aspect of the game falls down, another picks it up.  That’s how good teams keep going.

At the outset of the season, I declined the chance to make predictions, but did say that this club should get better as the season progressed, and that has certainly proven to be true.  Will the club make the playoffs?  It’s a tough task to make up ground in today’s NHL, and even tougher to maintain the blistering pace we’ve seen over the last seven games. It’s possible, but until the games played situation evens out a bit more, the chances are too difficult to handicap.  Columbus has 10 home games and 12 road games remaining, but those twelve come in the last 17 of the season.

However, in many respects the playoffs would almost be a bonus this season.  After all of the adversity of the past few years, good things are happening.  On the ice, this young team is giving credence to the late Herb Brooks’ credo of “I’m not looking for the best players — I’m looking for the right ones.”  In the front office, the hiring of John Davidson and Jarmo Kekalainen has brought optimisim to the fore, buoyed by the three first round picks awaiting Columbus at this year’s draft.  The impending move to the Eastern Conference will be a boon to fan interest and fiscal success.