Last September, St. Louis Blues management wanted to shore up a physical bottom-six forward group while adding a veteran leader in the process. They attained both goals with the signing of Brenden Morrow to a one-year, $1.5 million contract.

Morrow was known as a true competitor who can stand in front of the net on the power play and make opponents pay for dirty hits. He was also seeking his first Stanley Cup, which fit in well with the persona that the management wanted to relay to its loyal fans.

The result was a player who found himself in the top-11 forwards in terms of average-minutes-per game (11:54), who also contributed 13 goals, 25 points and a plus-1 in 71 regular-season games.

The Blues are looking in another direction this summer, though, as they were ousted from the first round of the playoffs for the second time in as many seasons.

This time around, the Blues are mixing Swedish left winger Joakim Lindstrom into the group, as he signed a one-year, $700,000 contract on Wednesday. Lindstrom’s name does not stand out as much as Morrow’s once did. 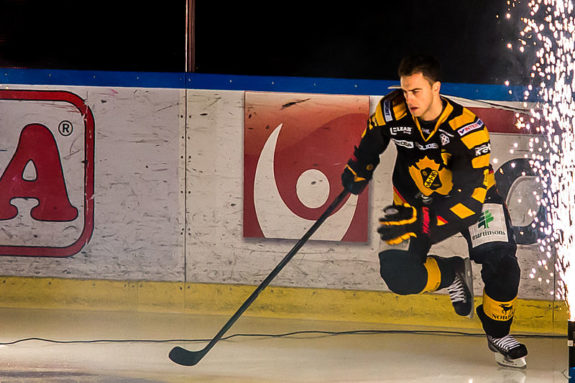 Lindstrom spent the past four seasons playing in Sweden

The signing is noteworthy due to it being a one-way contract, meaning he will be paid the same amount whether he plays with the NHL club or the AHL’s Chicago Wolves. This type of contract is usually only offered to those that are all-but-a guarantee to make the NHL roster.

He’s not a prospect (30 years old) and he’s never been considered a full-time NHL player (97 career games between the Columbus Blue Jackets, Phoenix Coyotes and Colorado Avalanche). His last NHL game was in November 2011.

What attracted the Blues to Lindstrom was what he has done away from the NHL. The 2002 Blue Jackets second-round pick has been skating with Skelleftea of the Swedish Elite League (SEL) for the past four seasons, where he won two championships in the past two playoff years.

The left-handed winger was awarded the SEL’s postseason MVP award this past postseason after he accumulated six goals and 18 points in 14 games to lead the entire league. He also finished second in the point race during the regular season with 63 tallies (23 goals, 40 assists) in 55 games.

The 6-foot, 203-pound skater may be a glimpse into the makeup of the Blues’ roster for the season to come. Armstrong has gone the route of gritty and slower forwards to wreak havoc in the opposing zone once the puck is deep. Although this mentality has proven to be successful in the past, the Blues seemed to lack foot speed and offensive creativity in the six-game loss to the Chicago Blackhawks. Adding Lindstrom as a mid-level player who can bounce between the second and third lines gives the team a bit more authority in the offensive zone and on the breakout from the defensive zone.

His cheaper price tag suggests that the Blues could be looking to save some dough if they decide to acquire more help on the scoring lines. Unrestricted free agents Brenden Morrow, Steve Ott and Derek Roy, all of whom were considered depth players last season, cost Armstrong’s club $8.45 million toward the cap. If Lindstrom can provide the club what it needs, it would be at a fraction of the cost that the team saw from its signings a season ago.

The low-risk, high-reward contract allows the Blues wiggle room if things don’t work out. Keeping his miniscule contract on file if he is shipped to Chicago will not put the Blues in a salary-cap dilemma.

Although the signing may seem insignificant, it could offer a peek into management’s way of figuring the roster for the rest of the summer.