Examine the offensive output of nearly any team since the NHL began. One thing that should strike you is that although one line might display greater overall output given the presence of a superstar, the best teams — and those that win Cups — cannot rely on that one line to carry them all the way through. From the 80’s Oilers needing points from Messier and Tikkanen to supplement Gretzky, to Stevens playing off of Lemieux and Jagr in the early 1990’s the point is clear: relying on two or three players on a single line is a recipe for disaster against good teams. 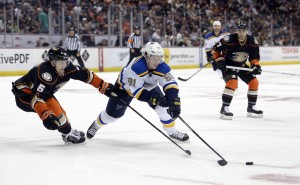 Vladimir Tarasenko as the “T” in the vaunted STL Line cannot do it alone. (Richard Mackson-USA TODAY Sports)

The opposition watches tape too

On a recent road trip that saw the Blues travel most recently through Boston and Montreal, the STL Line scored 11 of 15 goals. When two of the remaining balance was provided by Jay Bouwmeester and Patrik Berglund, that could just as easily be 11 out of 13 goals — a staggering 85 percent generated by three players. While impressive on the surface, that’s both unsustainable long-term, and signals a disturbing over-reliance on that group to win games on their own. Road games are particularly problematic for the Blues, since all the opposition has to do is watch when the STL Line comes out, then drop their best defenders in against them. This isn’t groundbreaking strategy: each team pits their best defense against the opposition’s best offensive threats. The problem is, who backfills the resulting lack of output? Although the line is so dynamic it will still probably get some points anyway, one or two goals is not enough long-term if that line’s output still represents upwards of 60-70 percent of the team’s total over the long haul. The situation is reminiscent of the middle portion of the Hull era in St. Louis, where once he was targeted the team had to rely on Brendan Shanahan, Nelson Emerson and the rest of a motley crew to fill the gap. This Blues team has enough talent to do make this a non-issue, but has thus far shown a frustrating inability to do so with consistency. 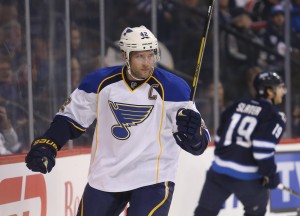 Captain America needs to motivate this team and himself. (Bruce Fedyck-USA TODAY Sports)

No excuses for a team this deep

Outside of the STL Line, the Blues have players that have each repeatedly eclipsed the 20-goal mark. Alexander Steen, David Backes, T.J. Oshie and especially Paul Stastny have a few things to answer for. Outside of a few lopsided wins in the early season, the team has not shown the ability to spread the scoring around each night as they have done in the past. Especially frustrating is $7M man Stastny, who a month into the season still looks like he’s not truly up to speed after his brief, seemingly minor injury. Going -3 against the “juggernaut” Canadiens is not what the team pays him for. Keeping points off the board is equally as important as putting them up, especially as popgun as the team has been of late. There’s way too much talent and payroll invested with certain players for them to play the role of rest-giver to the STL Line so they can continue to do the yeoman’s work. Although it’s expected that the rest of the team will wake up offensively over time, the trends seen thus far indicate a potential problem as the season progresses. The situation is masked by the team’s recent 9-1 streak, similar to how not making car payments seems like a good way to free up cash flow until it’s put on a flatbed three months later. 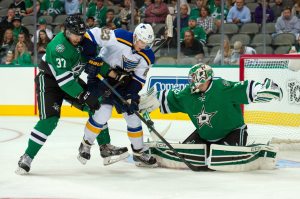 Breaking up the STL is hard to do

Although it seems heretical to think of breaking up the STL Line to spread the wealth, the concentration of scoring punch on that one grouping might be causing more problems than it solves (seemingly untouchable is the supernatural chemistry between Jori Lehtera and Tarasenko, so it’s reasonable to assume the other position becomes a platoon spot). The line found good success the Steen rather than Jaden Schwartz, for example, so it could be dropping Schwartz in on another line to generate some energy is all that’s needed. A common complaint against Hitchcock is breaking up lines and defensive pairings, and while this keeps the other team guessing, it has the same effect for guys not used to playing with one another. The situation by necessity demands contemplation and not a knee-jerk reaction. However, one thing that’s becoming clearer is the Lindstrom experiment might not be what the Blues envisioned. With the big club, Dimitri Jaskin provided a big body and nose for the net — two important assets against tougher Western teams and Eastern teams like the Bruins. Regardless of the changes Hitchcock makes to the lineup, something needs to give while the team is still in a good position in the West.