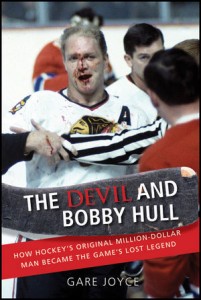 The Golden Jet.  The First Million Dollar Pro Athlete.  Legendary Chicago Black Hawk.  Hockey fans on both sides of the border will sing the praises of Bobby Hull’s impact on how the game is played and the way he played it.  From his Stanley Cup winning team with the Black Hawks to the Jets’ Hot Line of Hedberg-Hull-Nillson, the lore surrounding Bobby Hull will live on in the minds of fans as well as the Hockey Hall of Fame.

The Devil and Bobby Hull contains some of the more infamous details of the Hull legend where Gare Joyce fills in the blanks for many fans.  The book’s jacket will tell you that it “details the decline and fall of this legendary star and the damage, some of it self-inflicted, to his legacy.”  Fortunately for readers, Joyce did not fall into the obvious trap and fill the pages of the book with sensational tabloid fodder.

Between interviews (even with Hull himself), court records, newspaper reports, and other resources, the book shows considerable research and is pretty even-handed.  The narrative is well written and compelling, and provides a great amount of insight into Hull’s life and times.  Each chapter is introduced anecdotally, most with stories from a day Joyce spent with Hull during a book signing tour stop at Wayne Gretzky’s restaurant in Toronto.  There are also eight pages of black and white photos chronicling Hull’s career from being an 18 year old drafted by the Black Hawks to celebrating the 2010 Stanley Cup with the Blackhawks.

Stories of Hull’s playing days and his escapades on and off the ice are presented in a matter-of-fact way.  Life was not a bowl of cherries in the Hull household, nor is it now in the present where his family is concerned.  In the past, the idolization of athletes and their images was controlled.  Nowadays, some of Hull’s foibles would simply be chalked up to the “privileges” received from being an elite athlete.

Ultimately, though, Hull has earned and deserved the credit for changing the game for today’s players.  The contribution Hull made by standing up for himself as a player, no matter how self-serving that may have been, and the consequences he endured have given the next generation of hockey players more control of their careers than many of their predecessors could ever have imagined.

In one of his more interesting analogies, Joyce likens Hull’s experience going from the NHL to the WHA to the Rolling Stones “Exile on Main Street.”  In the chapter titled “Exile on Portage and Main Street” he chronicled Hull’s experiences in the WHA.  He discusses how the WHA was one way in theory and another in reality and compares the Stones getting swindled out of royalties to Hull’s experiences with how Bill Wirtz had “hustled the best years out of him.”

There were a few concerns that stick out in the narrative.  These do not appear until nearly the end of the book, but are foreshadowed by remarks like those about Hull’s frequent memory lapses and “what if” statements.  First, Joyce devoted a chapter to CTE and concussions by using the story of Reg Fleming.  While it is probable that many retired players are likely to be suffering from the affects of years of under-treated injuries (especially concussions), readers are likely to make the inference that all of Hull’s transgressions can be chalked up to CTE and undiagnosed concussions.

Second, Joyce chooses to play “pop psychologist” and offer a “narcissistic personality” diagnosis on Hull.  While both the CTE and narcissism may be valid interpretations of Hull’s behavior, Joyce seemed to purposely lead his readers toward these conclusions.*

The book attempts to make the case of “why this remarkable man has not received his due” and that “Hull is the most influential player the game has ever seen and its most unfairly overlooked superstar.”  Overall, Joyce was successful on both points.  The eventual outcome of the narrative is not as positive as the jacket makes this goal sound.  Joyce concluded the Epilogue with the following sentence, “He’s in that most curious of times and circumstances: he has outlived his image.”  The latter part of the book occasionally sounds more judgmental than may have been intended.

As a historian, I appreciated little things like his differentiation between Hull’s Black Hawks and the more recent version of the Blackhawks.  As a transplanted Chicagoan, I laughed at his statement on statues at United Center – “Now, if it were a statue of Bill Wirtz, that would be another matter entirely.  It would likely be toppled like the statue of Saddam Hussein in Baghdad.”  Some of the chapters take fans behind the scenes of the era’s more famous events, like the comment on having four coaches for the Canada Cup against the Soviet Union, “We needed four coaches to keep all the egos in line.” (Al MacNeil)

Despite and because of all this, the narrative as a whole overcomes the few shortcomings.  I highly recommend The Devil and Bobby Hull – whether or not you are a fan of Hull, the Jets, or the Blackhawks.

*This review is not meant to diminish the truly horrible affects these injuries have on former and current players (especially in light of the tragedies experienced by the hockey world this summer).  The chapter and epilogue dealing with these issues felt somewhat out of place in the narrative, as though the author was in one way attempting to excuse some of Hull’s more unappealing personality traits but in another way purposely bringing in a topic because it is timely.