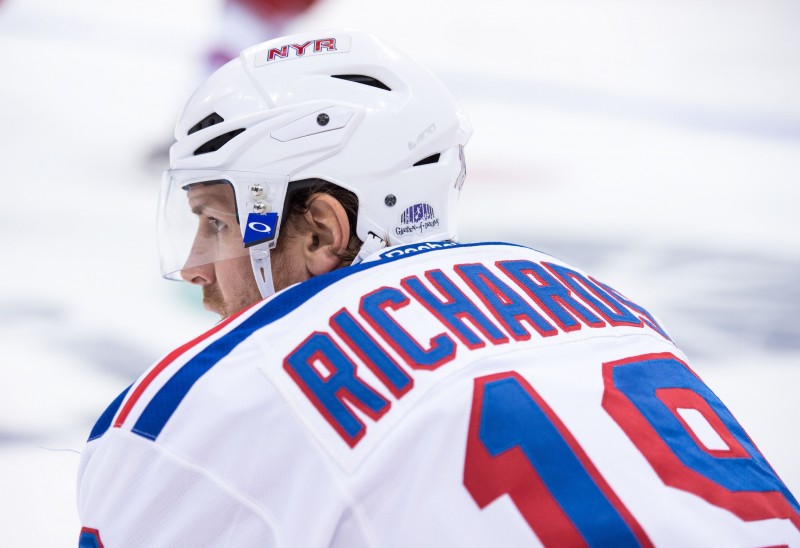 If you are a fan of the New York Rangers, or have even followed the Broadway Blueshirts over the past couple of years, then you know all of the rumors circulating around Assistant Captain, Brad Richards, and his future with the organization.

Since Richards’ difficult lock-out shortened season last year, it has appeared almost certain that his days as a member of the Rangers organization were numbered. It seems that no matter what the veteran centerman does, he can’t escape from the talk that his long-term, front-loaded contract will lead to his compliance buy-out at the end of this season, the final year that the Rangers would be eligible to utilize an amnesty on a rostered player.

There are many reasons why letting Richards go at the end of the season would make sense for the Blueshirts financially, however, in terms of his locker room presence and on-ice potential, this would be a mistake down the line. However, that is an argument for another day.

Right now the Rangers are gearing up for their fourth straight playoff appearance with the chance to compete for their first Stanley Cup victory in exactly 20 years. While still very fresh in the memories of Rangers fans everywhere, the days of 1994 with Brian Leetch, Adam Graves, Mike Richter, and “The Captain” Mark Messier, are long gone, and with the team still searching for that next Cup run, they will need their core to step up and lift the city just like they did in that magical run two decades ago.

For that to happen, regardless of all the rumors about offseason plans, the Rangers need to focus on the here-and-now. That means that a Stanley Cup run for New York would require a very important piece of the puzzle to fall into place. That piece…is Brad Richards.

While Richards may no longer be the 91-point scorer that he was both with the Tampa Bay Lightning and Dallas Stars earlier in his career, he is still a very capable player at putting numbers up on the board.

Richards has quietly been one of the most efficient Rangers so far this season, and while he may not dazzle on the ice, like Nash or Ryan McDonagh, he always seems to come through when the Rangers need it most.

Last night, New York needed a big win after a tough loss to the Ottawa Senators a couple of nights prior in order to keep a strong grip on first-round home-ice advantage. When needed most, Richards heated up, leading the way for the Blueshirts’ victory over the Carolina Hurricanes with two goals in the 4-1 victory.

Not only were the two goals big for both he and the team’s confidence moving forward, but perhaps more importantly was when they were scored. Both of Richard’s goals last night came on the powerplay, something that the Rangers have struggled mightily with as of late.

Richards will be a major part of postseason success. (Geoff Burke-US PRESSWIRE)

Prior to last night’s game, the team had been 2 for their last 21 and 5-for-52 (9.6%) in their last 17 games. A PP that started the year so hot, had begun to look like the stagnant Rangers powerplays that had plagued the team’s success during the John Tortorella “defense-first” years.

Special teams are such a crucial part of a winning campaign during the Stanley Cup Playoffs, and while the Rangers penalty kill has been stellar as usual, the powerplay is something that they will need to perfect if they hope for a long run throughout the spring.

In Richards, the Rangers have their most important piece on that extra-man advantage, as he has been the point man and quarterback of the first PP unit all season long. Should Richards lead the powerplay as successfully as he did last night, where the puck movement and decision-making seemed crisp and without hesitation, then it should be much improved come time for the postseason to begin later next week (especially when Richards decides to shoot the puck).

The powerplay has long been the demise of the Rangers organization, who have had the players, but not the system to run a successful man-up unit. But with Richards at the helm, and making the confident decision to shoot from the point when needed, it should become the advantage that they need it to be.

Love him or not, Brad Richards is a valuable player for any team to have on their roster. Not only does he bring a keen sense for the game, and exceptional play-making skills, but he also brings a veteran presence and leadership that is absolutely crucial for a relatively young team in the postseason.

With seven trips to the playoffs and a Stanley Cup ring on his finger, Richards knows what it takes to win in postseason. His presence in both in the locker room, and on the ice will have a calming effect on the teammates around him who may not have as much experience in postseason play.

In addition, the Rangers have another key piece to their playoff puzzle, a guy they acquired during the NHL Trade Deadline in March, Martin St. Louis. St. Louis broke out last night with 3 assists for the Blueshirts, his most in a single game since joining the team after 14 years playing in Tampa Bay.

St. Louis has had a difficult transition as of late, scoring just 4 points in his first 17 games as a Ranger. However, his 3 points last night gave him nearly his entire New York total in just 60 minutes of play, meaning that he may be ready to break out. He also was named one of the three stars of the game, receiving a thunderous applause from a Rangers crowd who has beenwaiting to see the Art Ross Trophy winner contribute to the offense as expected, and may signal his growing comfort in playing under the bright lights of Broadway.

With arguably his best game as a Ranger coming last night, it is no surprise to see who he was playing with for most of the night – Brad Richards. One of the biggest advantages that the Rangers have with a newly-acquired star coming to a new team for the first time in over a decade is the familiarity with one of their own. 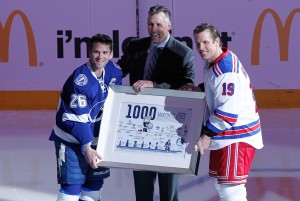 Richards and St. Louis were teammates during the Lightning’s 2004 Stanley Cup run, and were linemates for much of that season. Reuniting the two will hopefully recreate some of that offensive chemistry that they had formed, down the stretch. It seems that the more they play together, the more the Richards-St. Louis combo of old seems to come out.

In last night’s game, their chemistry finally clicked on all cylinders, and the result was both players having big games. Marty St. Louis will be a major part of any postseason success that the Rangers hope to have. If anyone can help him feel right at home, and get his true potential out of him on the ice, that man is #19.

Therefore, Richards’ success in the playoffs will most likely become the catalyst for St. Louis’ playoff success as well, giving the Rangers a potent punch this spring.

Perhaps one of the most important things that Brad Richards can offer the New York Rangers during the 2013-14 Stanley Cup Playoffs, in a year in which his health and fitness level have seemed to stay intact, is his reputation as a clutch player.

Not only is he a Stanley Cup winner, but during the 2004 Cup run Richards was named the Conn Smythe Trophy Winner as the MVP of the playoffs for the Lightning.  That award is highly prestigious as it means that you have to come through during the most important and high-pressure situations, and emerge as the go-to-guy during that stretch.

During that run, Richards not only proved that he is a winner, but also proved that he is needed in order for a team to become a winner. His play during that postseason speaks for itself with 26 points that year. But the intangibles that he also brought, and continues to bring made him a must-have player for any team with Stanley Cup aspirations.

He has also proven to be that type of player with the Rangers during his brief tenure so far. In case anybody forgot, in 2012 during Game 5 of the Eastern Conference Semi-finals against the Washington Capitals, things looked bleak for the Rangers, who looked like they were headed back to Washington down in the series 3-2. However, remarkably with 6.6 seconds left, Richards somehow found the back of the net during a mad scramble in front, in order to tie the game and send it to overtime.

Rangers ended up winning that one in OT off a Marc Staal goal, and went on to win the series in seven at home, and advanced to the Conference Finals. That series changing goal came about from Richards being in the right place at the right time, and coming through in the clutch, something that has become synonymous with his name.

With the Rangers gearing up for yet another run at the Cup, they will need the clutch play of Brad Richards to be out in full force in order to go on what Blueshirts fans are hoping will be an exciting spring in lower Manhattan.

If New York is going to go anywhere in the 2014 Stanley Cup Playoffs, the team is going to need #19 to be right at the center of all the action.

And in case you’ve forgotten, here’s a little reminder: