The NHL made some big changes to the rule book this off-season. Changes ranging from video review to 3 on 3 overtime were implemented, and they will have huge implications on the way the game is played.

This adds to the changes made to rule 38 from last season. From NHL.com:

As the NHL mentioned in their quote above, the expansion of this rule is intended to be minor, however the consequences could be pretty drastic.

From what it seems like, this means that any play can now be reviewed by the war room. Previously, calls involving goaltender interference were not reviewable, and this had huge implications on the outcomes of some games. Goaltenders know that if they make it seem like the attacking player hindered their ability to stop, that the referee will usually side with the goaltender. They also knew that this couldn’t be looked at on video.

That will change now, and it’s a huge step in the right direction for the NHL, especially regarding embellishment. Everything has the ability to be looked at now, and this ties into the next rule change.

The NHL has broken this rule down into a few sections, each regarding what is considered a “challengable play”.

Part A is as follows:

“”Off-Side” Play Leading to a Goal. A play that results in a “GOAL” call on the ice where the defending team asserts that the play should have been stopped by reason of an “Off-Side” infraction by the attacking team.”

This one is pretty straightforward, and will really help improve the accuracy of calls on the ice.

That goal happened in Game 1 of the 2012 Conference Quarterfinals. Briere was offside by a substantial margin and the on-ice officials flat-out missed the call. With this new rule being put into place, the Penguins would now be able to challenge that call (and have the goal waved off). It does remove the thrill of human error in the game, but ultimately it will help to determine the right call.

What this rule doesn’t include, is if the attacking team is onside, and a referee calls it offside. In that scenario, the play is still dead, and there

won’t be any further review. That’s good, because if the NHL allowed that to be reviewable, there would be guys shooting and playing after the whistle all the time. Not only could that lead to confusion, but it could be dangerous.

Part B (Scoring on Interference of the Goalkeeper) is divided into a few subsections. Part I is as follows:

“A play that results in a “GOAL” call on the ice where the defending team asserts that the goal should have been disallowed due to “Interference on the Goalkeeper,” as described in Rules 69.1, 69.3 and 69.4″

The NHL kept it simple here. If the defending team thinks the attacking player interferes with the goaltenders ability to stop the puck, they can challenge the play. This is bad news for guys who make a living off of being pests in front of the net. The referees can’t see every poke, jab, and bump on the ice, but a slow-motion replay will. Screening the goalie is an art, and quite frequently there is contact involved. It will be interesting to see how lenient the officials are in this area.

The NHL needed to put something like into the game so bad. Awhile back I wrote about how officials were continually giving goalies the benefit of the doubt. That won’t happen anymore with this rule. 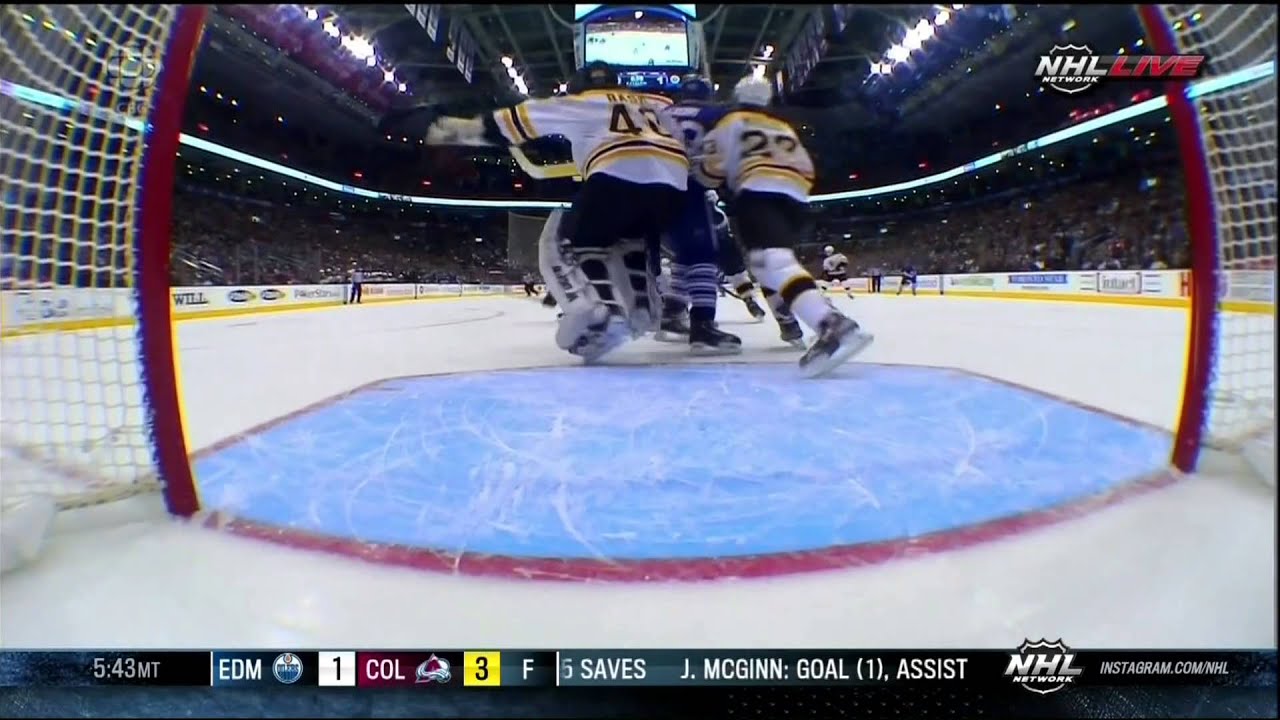 Countless times, defenders get away with shoving an attacking player into their own goalie, the puck goes into the net, but it’s deemed no goal, because from the referee’s vantage point, he could only see the attacking player make contact with the goalie. The video above is a prime example. Kadri was bumped by the defender, the referee saw Kadri bump Rask, no goal. With this new rule, Toronto would be able to challenge that play, it’s hard to say what the ruling would have been, but there’s a good chance that would now be called a goal.

That was never reviewable at all in the past, let alone by a coach’s challenge. Now it is, and it should make a world of difference. It’s also important to note that these plays are only being looked at for the sole purpose of determining what is a good goal. A penalty cannot be assessed based on the video review.

There are some other interesting things to note about the challenges. A team can only use one if they have their timeout remaining. This is vastly different from a league like the NFL, who requires you to have timeouts, but granted, you have three per half. In the NHL, teams get one timeout per game. That’s a big deal considering a lot of the plays happen towards the latter part of the game. Timeout’s just became a lot more valuable.

Tieing into the rule above, is the fact that if the team loses the challenge, they forfeit their timeout. This once again forces teams to really use them wisely and to strategize. Timeouts are a huge part of the game in the NHL, from resting guys after an icing call, to regrouping after a bad sequence, now throw in the fact that you need one to utilize the coach’s challenge, and it’s a whole new ballgame.

The last part of the coach’s challenge is league initiated review, which distinctly comes into play in one crucial situation:

“In the final minute of play in the 3rd Period and at any point in Overtime (Regular Season and Playoffs), Hockey Operations will initiate the review of any scenario that would otherwise be subject to a Coach’s Challenge.”

In other words, coach’s challenges become obsolete with a minute remaining in regulation and throughout overtime. This essentially expands the use of video review to include everything mentioned above, but only in the last-minute or in overtime. This is meant as a buffer so that teams won’t be screwed out of a goal in the last-minute, or more importantly, something like a playoff overtime.

It’s also important to note that things that were subject to video review last season still fall under the same rule. A team will not need to use a coach’s challenge for high-sticks, kicking motion, or for determining if the puck crossed the goal line. The NHL will still go to Toronto, a coach’s challenge won’t be needed.

There it is, what everyone has been waiting for.

Hop into your time machine way back to the beginning of the 2005-06 season. Fresh off of a lockout, the NHL implemented one of its biggest changes in year by eliminating ties with the shootout. That was awesome, at least for the time being, until fans quickly realized that it was more of a skills competition than an actual representation of the game on the ice. Since then, the shootout has carried way more weight than it should have, including in 2010 when the Flyers and Rangers needed one to determine who would punch a ticket to the playoffs.

The shootout will still exist, but it most likely will be seen far less.

Last season, the AHL adopted the 3-on-3 overtime as a continuation of 4-on-4 overtime. The first three minutes of overtime were 4-on-4, and the last four minutes (so seven total minutes of overtime) were 3-0n-3. So how well did that work? Here are some stats (through January of last season) courtesy of Greg Wyshynski over at Yahoo!:

That is a huge decline in the number of games decided in the shootout. Of course there are some differences, the AHL had an extra 2 minutes of overtime, however, the NHL will have a minute more of 3-on-3 play (five minutes vs. the AHL’s four).

Putting 3-on-3 into the game allows the ice to be wide open. Every decision needs to be calculated with precision, a simple pinch along the boards or missed pass could quickly lead to an odd-man rush the other way. That should allow plenty more goals to be scored, especially at the speed the game is played at already.

The shootout won’t be gone, but you can expect to see it far less with the implementation of 3-on-3 overtime.