This trade comes just a short while after the Bruins made a trade with the Minnesota Wild to acquire Charlie Coyle in exchange for Ryan Donato and a fourth-round pick in 2019. This now gives the Bruins two possible top-nine players who can bolster one of the NHL’s best lineups heading into the final stretch of the regular season and the postseason.

The Bruins occupy the second spot in the Atlantic Division and Eastern Conference and hold a three-point lead on the Toronto Maple Leafs. It was expected that the Bruins would need to make some sort of trade to keep up with the Lightning, even if they didn’t swing for the fences and acquire a player like Mark Stone as many expected they might try to do.

Marcus Johansson has been traded from the New Jersey Devils to the Boston Bruins ahead of the 2019 NHL Trade Deadline, October 20, 2018 (Amy Irvin / The Hockey Writers)

The 28-year-old Johansson has scored 12 goals and 27 points in 48 games this season and provides a bevy of options for the Bruins as they look to compete this season. The Swedish-forward is capable of playing both center and on the wing and has experience on the penalty kill. This could go a long way for the Bruins as the playoffs tend to be rigorous and require depth each and every season.

Johansson is in the final year of a three-year contract that he signed with the Washington Capitals back in 2016 prior to a trade that saw him shipped off to the Devils. This contract carries a $4.583 million cap hit, though it’s pro-rated to just over $1 million for the remainder of the season. The fact that Johansson comes in as a rental also means that the Bruins don’t have to stress about their long-term salary cap future as a result of this deal.

This isn’t to say that the Bruins won’t make a push to re-sign Johansson when all is said and done but it’s certainly too early in the process to project that at this point.

Johansson and Marchand Have Bad History

The Devils managed to get two draft picks for Johansson despite the fact that the veteran forward is having a down season and has dealt with injuries over the last two seasons. Getting a second-round pick was good value for both sides, but the trade to the Bruins is a questionable one given Johansson’s history with Bruins’ star Brad Marchand. 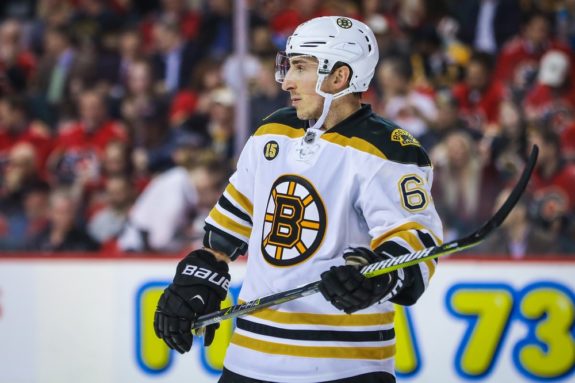 It was less than a year ago that Johansson berated Marchand for giving him a concussion on a reckless elbow.

It will be interesting to see how this plays out in Boston and if Johansson can find it in himself to forgive the Bruins’ winger. Even if he can’t, he’ll have to coexist with him at least until the end of the season.