When Terry Pegula purchased the Buffalo Sabres in February of 2011, fans were a bit skeptical. Nobody in the area had really heard of the East Resources owner from northern Pennsylvania. However, Pegula almost instantly removed all doubts fans had, invigorating the Buffalo faithful by saying that from that point on, “the Buffalo Sabres’ reason for existence will be to win a Stanley Cup” at his introductory press conference. 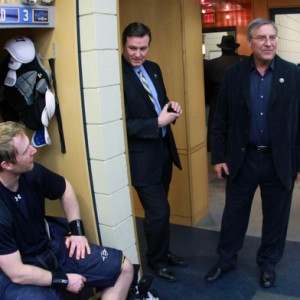 While this was certainly the more headline-friendly quote from Pegula’s introduction, the media event was not without its attention-grabbing statements. Ted Black, who Pegula had just appointed as the team’s president, stated that one of Pegula’s main goals as owner was to turn Buffalo into “hockey heaven.” “It might not happen this year, it might not happen next year,” Black said, “but it’s going to happen.”

It’s been nearly six years since the Pennsylvania billionaire purchased the Sabres. Has he delivered on his promise of bringing a Stanley Cup to the City of Good Neighbors? No. In fact, the team has been awful under Pegula’s ownership. The Sabres have made the playoffs once since he purchased the team, and are currently coming to the end of a multi-year rebuild.

However, ownership has been able to deliver on at least one of their promises. Pegula promised that he would turn the city of Buffalo into “hockey heaven,” which is exactly what it is becoming.

When Pegula purchased the Sabres in the early months of 2011, things weren’t great in Buffalo. The city was in a rut that it had been in for the better half of the 20th century. Little new development was taking place in the city’s downtown area, prompting many life-long Buffalo residents to up and leave. The city had earned the nickname of “The Armpit of the East,” a nickname it was living up to.

Fans weren’t proud to live in the city their team called home, something Pegula wanted to change. He accomplished this by constructing the HARBORCenter, a state-of-the-art facility that has become one of the sought after hockey-related buildings in the world. 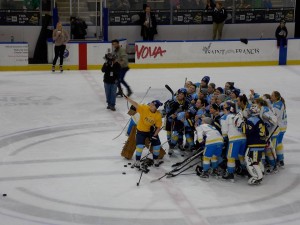 Announced in the summer of 2012, the HARBORCenter was advertised as the premier hockey facility in the country. The arena, which contains two ice-rinks, a two-story restaurant, and a Marriott hotel, opened in the fall of 2014. It has almost single-handedly rejuvenated tourism in Buffalo’s downtown area. The facility has hosted hundreds of hockey tournaments since its opening, and has been visited by over 200 teams from around North America.

The HARBORCenter serves as the home for a number of different teams. The Key Bank Rink, which seats over 1,800 people, is the home ice for the NCAA’s Canisius Golden Griffins and the OJHL Buffalo Jr. Sabres. The HARBORCenter is also the home to the NWHL’s Buffalo Beauts, one of just four teams in the National Women’s Hockey League. The arena actually hosted the NWHL’s inaugural All-Star Game, an event that drew around 1,000 fans.

The HARBORCenter has allowed Buffalo to host a number of events the city could have only dreamed of hosting one decade ago, allowing the city to emerge as “hockey heaven.” 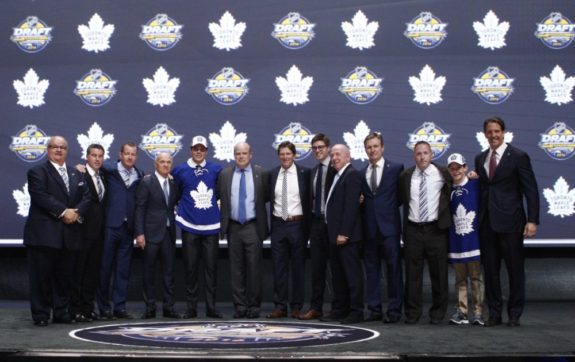 Buffalo served as the host to the 2016 NHL Entry Draft, a draft in which Auston Matthews was selected with the first overall pick. (Timothy T. Ludwig-USA TODAY Sports)

Buffalo has quickly become a popular destination for the National Hockey League. The league has held a number of events in Buffalo throughout the past number of years, something that rarely happened before Pegula’s purchase. The construction of the HARBORCenter prompted the league to move its annual draft combine from Toronto to the Queen City. Buffalo has hosted the draft combine for the past two years, and will hold the event yet again in 2017.

The Sabres organization’s cooperation and hospitality with the league combined with the city’s passion for hockey were rewarded, as the city was awarded the right to host the 2016 NHL Draft. Commissioner Gary Bettman commented on the city’s love for hockey during the draft location announcement, stating that “awarding the (2016 NHL Draft) to Buffalo honors the passion of its fans for our sport.”

Buffalo will also host the 2018 IIHF World Junior Championship. The city, which also hosted the event in 2011, will be the first American city to host the event twice. The HARBORCenter played a huge role in securing the tournament for the city on Lake Erie. Games will be played in both there and the Key Bank Center, home of the Buffalo Sabres. Fans will be able to watch a day’s worth of hockey on three different rinks without ever going outside.

The 2018 IIHF World Junior Championship will also see an outdoor game, as Orchard Park’s New Era Field will host a game between the United States and Canada on December 29, 2017. Over 70,000 fans will watch the USA and Canada add yet another high-profile game to their classic rivalry. In what has become a semi-regular occurrence, all eyes in the hockey world will be on Buffalo.

When Terry Pegula purchased the Buffalo Sabres, many fans expected that it would be a turning point for the franchise. While the team itself hasn’t performed well since the Pegula takeover, the city has emerged as one of North America’s hockey hotbeds. The Pennsylvania native has attracted hundreds of hockey tournaments to Buffalo with the construction of the HARBORCenter. Should the facility remain as popular as it has been, it will continue to attract tournaments to the city. Buffalo has also become a popular host to NHL and international events since Pegula’s purchase of the team. All of these elements do nothing but prove that Pegula has achieved his vision of turning Buffalo into hockey heaven.

The residents of Buffalo, New York had been craving a renaissance for years. Little did they know that it would take a Pennsylvania billionaire and the game of hockey to deliver it.