Before the season began, many Buffalo Sabres fans were just wishing for meaningful games come March. They didn’t expect a Tuesday night game at the end of November to be one in which they’d fall further head over heels in love with their team. 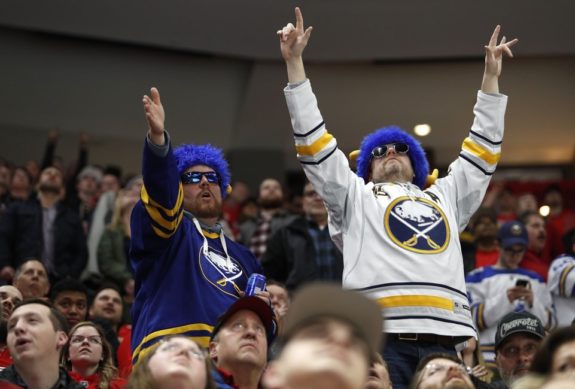 The Sabres won their tenth straight game, tying their franchise-best by defeating the San Jose Sharks 3-2 in an overtime thriller. The bench erupted in pure joy after netting the winner.

They’ve now matched the franchise record set in January of 1984 and duplicated in October of 2006. It’s historic stuff. And though it’s hard to believe, it’s very real. Even Sabres legendary broadcaster Rick Jeanneret said after the game-winner, “You asked for it, you got it: These guys are good. Scarrrry good.”

The team which finished dead last in 2017-18 now boasts a record of 17-6-2 with 36 points and sits atop the entire NHL. The win vaulted them over the Nashville Predators and Tampa Bay Lightning. The Sabres will go for the franchise’s first 11-game streak Thursday night against the Lightning–a showdown of two of the league’s best teams right now.

Winning Every Which Way

KeyBank Center was filled with loud and passionate fans, ready to witness something special. Their chants of “We want 10!” echoed throughout the night. They got what they asked for, though it didn’t exactly go smoothly.

The Sabres surrendered a two-goal lead in the third period as Joe Pavelski picked up a pair of goals. But, they grasped victory with an overtime winner by Jeff Skinner. It was the sniper’s 19th goal of the season, tying him for the league lead with Boston Bruins’ David Pastrnak and Winnipeg Jets’ Patrik Laine.

“It just seems we’re really comfortable going into overtime,” said coach Phil Housley. “We’ve had some good results and I thought we attacked it in overtime.”

Once again netminder Carter Hutton was impressive, backstopping the team with 36 saves on 38 shots. He upped his personal-best winning streak to eight games.

Rasmus “What Kind of Celly Was That?” Ristolainen

Rasmus Ristolainen broke open the scoring late in the second period. He danced around 2016-17 Norris Trophy winner Brent Burns with a dipsy-doodle move to himself through his own legs before beating goaltender Martin Jones top shelf.

He followed it up with a ridiculous celebration. He twirled his stick and pranced on his feet. Even Skinner had a hard time figuring it out after the game. “It was alright I guess,” said Skinner with an ear-to-ear grin. “He had nice footwork there.”

Former Sabres pugilist and color commentary man, Rob Ray added, “‘Dancing with the Stars’, give him a call. This was sick.”

On the game-winning goal, Rasmus Dahlin made a ridiculous behind-the-back play around five-time All-Star and two-time Norris Trophy winner Erik Karlsson. The play forced Jones out of position, allowing Skinner to pick up a loose puck and finish the game. It’s a play most teenagers wouldn’t even try on Playstation, let alone a rookie defensemen in the NHL.

Just before that play, the rookie blueliner skated hard, backchecking to break up a pass to Karlsson in the slot right. His hustle and creativity are constant reminders of what made him a No. 1 pick overall.

The win spoiled the return of forward Evander Kane to his former stomping grounds. The left winger played three seasons with the Sabres before being dealt by general manager Jason Botterill at the trade deadline last winter. He re-signed a seven-year, $49 million contract with the Sharks in May.

Kane registered two shots, a hit, and was minus-two in 19:18 of ice time. He nearly crushed the hearts of Sabres fans during an odd-man rush late in the third period, but flipped his backhander wide of the net. He was welcomed back with a message on the video board, but didn’t get any kind of video montage. He received both mild boos and applause during the night.

Not to be forgotten, there was another battle going on inside KeyBank Center. It was Hockey Fights Cancer night in Buffalo– a touching night, filled with courage and inspiration for those battling and touched by the disease. The Sabres wore lavender jerseys during the pre-game warmup, and many items and experiences were auctioned off to raise money for cancer research. They’re up for bid thru Dec. 9. In addition, a special pre-game video presentation was aired.