Things are finally starting to look up for the Colorado Avalanche. Yes, the team still sits at .500 and is currently in 12th place in the Western Conference, but there is finally a reason for hope.

Signs of this hope began even before the Avalanche emphatically ended the Chicago Blackhawks’ impressive point streak. Things actually began a couple of days before that.

The Avalanche started a three-game road trip against the lowly Columbus Blue Jackets and put together one of the worst efforts in recent memory, despite the return of Ryan O’Reilly. The Avalanche, against the worst team in the NHL at the time, put up a grand total of 19 shots, while allowing 34 against.

The only goal of the game, for Colorado, came by complete accident as P.A. Parenteau put what can only be described as a floater in the net. The effort the Avalanche put forth could only be described as pathetic when they let Columbus tie the game, bring it to overtime, and then lose the game after they took a lazy penalty in overtime.

In some ways, however, that horrific effort might have come at the perfect time.

Team Finds Its Legs In Detroit and Chicago

You have to know that, after an effort as horrific as the one in Columbus, the coaching staff and likely many of the players were on each other right away to improve. It wasn’t like the Avalanche were going from one bad team to play another one, they were heading to Detroit and then Chicago. While the Red Wings haven’t been stellar this year, you can’t just come into Joe Louis Arena with a garbage effort and expect to win. That horrific effort against Columbus seemed to wake something up in the Avalanche, as they played a great game in Detroit.

Even though the team lost 2-1, nothing could be faulted about the effort, nor the two goals that Detroit scored. A serendipitous blocked shot that translated into a breakaway, and a puck that bounced off the back boards and off the goalie’s skate into the net (a goal that could only really happen in Detroit thanks to their lively boards). Even with those two goals resulting from fluky plays, the Avalanche had better chances most of the night and were simply beaten by a goaltender having an amazing game. 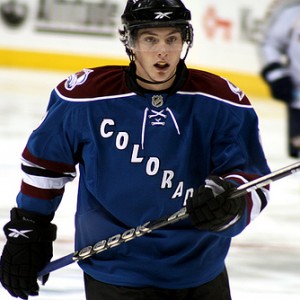 The Avalanche continued their strong effort the following night in Chicago, taking a lead into the third period only to see the Hawks surge past them in the last minute of the game. Again, the Avalanche were solid throughout the game and had some bad luck as a missed call allowed a shorthanded goal from Jonathan Toews, and the only real defensive lapse of the game allowed the Hawks to get the win.

The following night, however, the Avalanche wouldn’t be denied as they thrashed the Blackhawks on home ice.

What Prompted the Turnaround

As I mentioned a bit earlier, one of the contributing factors to this turnaround had to be the poor effort in Columbus. The Avalanche knew how they should perform against the Blue Jackets and did just that the first time the two teams met. For some reason, they simply took that night off and sometimes a team needs a rude reminder that you simply can’t do that against any team in the NHL today. If you do, then even the worst team in the NHL will make you look pretty bad. So that had to have been a solid wake-up call.

Another positive factor has to be that the Avalanche are finally getting healthy. They are still without Steve Downie and Milan Hejduk, but the Avalanche have seen the returns of three key players to the lineup in the past week: Ryan O’Reilly, Erik Johnson and Ryan Wilson. Johnson and Wilson serve as the top defensive pair for the Avalanche, so to have them both out of the lineup was a huge blow to the team. O’Reilly has made a solid impact since returning, now with two goals in his last two games.

It was obvious that the team was struggling with the injuries and it is nice to see the players returning having such a positive impact so early in their return.

The result has been a much improved and, more importantly, more consistent effort from the team. It stinks that they had to be reminded that they can’t take any nights off in this NHL with this shortened season, but it seems that the message has finally hit home. Not only did the Avalanche run the Blackhawks out of the Pepsi Center, they also put in another solid effort against San Jose, a team that they have struggled to beat for a while now, and pick up a win in the last second (literally) of overtime.