It appears that the seven-year relationship between the Calgary Flames and winger Curtis Glencross, an unrestricted free agent at the end of this season, is coming to an end. Glencross has let it be known that he’s no longer happy in Calgary and is looking to move to a team that he thinks has a chance at a championship.

Maybe it’s fitting that the two part ways, since Glencross was a part of a Flames roster that succeeded years ago, but of whom there is little trace left on the current roster. Mark Giordano remains (and continues to get better somehow), but gone is the era of Jarome Iginla, Mike Cammalleri, Lee Stempniak, Alex Tanguay, Olli Jokinen, Mikka Kiprusoff, Matt Stajan, and Rene Borque.

For the current Flame roster, the future is knocking. Some of those future pieces have arrived and made statements, like Sean Monahan, T.J. Brodie, and Johnny Gaudreau, others are just outside the door, like Markus Granlund, Michael Ferland, and recent acquisition Drew Shore (who shows lots of possession promise).

#Flames Curtis Glencross says he’s disappointed in how he has been utilized this season. Trade deadline concerns are just part of the game

What is surprising is the number of teams who are reported to have expressed interest in Glencross.

Glencross holds a no trade clause. Hearing up to 15 teams have inquired about him. His list is significantly less #Flames

Why is that surprising? Because Glencross isn’t the answer for a Cup contender and it’s reported that real contenders are the only teams he’s willing to waive his no trade clause for. Sportsnet’s Elliotte Friedman reported that the teams Glencross is willing to waive his NTC for are the Los Angeles Kings, Tampa Bay Lightning, Nashville Predators, Chicago Blackhawks, and Anaheim Ducks.

How He’s Been Used

The trade market isn’t lush with options this season, which could increase his value and might explain how quickly a reported 15 teams inquired about him. (That’s half the league!) However, a quick look over his point totals and you might think that we’re witnessing the decline and fall of Curtis Glencross. His 1.3 P/60 (points per 60 minutes of play) is the lowest of his career. But there’s an explanation for that, kind of.

Glencross’ complaint about his usage is dead on. He is being used differently. In even strength situations, Glencross has a -9% ZSO%Rel (zone starts relative to teammates), which is fourth worst among Calgary forwards. It’s not just a relative figure either, he has the worst overall zone starts of his career, starting just 38.5% of his shifts in the offensive zone.

But the usage complaint might be a bit overblown. His 16:49 of all situations ice time per game is the lowest he’s had in the last four seasons. However he got less ice time in each of the four seasons prior to that — both all situations and 5-on-5 — and had a better P/60 in all four of those seasons at even strength.

Why He’s Not The Solution

His PDO of 102.1 might have some people thinking he’s been lucky this season as well, but his 9.4% Sh% this season is the lowest of his career. He’s a career 14.4% shooter. It’s equally as stark at even strength where he’s shooting 7.7% and has a career average of 12.1%. There’s reason to believe that this number should regress toward the mean, which could mean more goals for whomever acquires him.

Unless you’re going out to acquire Martin St. Louis or Marian Gaborik, you’re probably better off looking for players who you know you can trust defensively.

His shooting percentage should come up, but the shots have to be there. Even taking into account his lousy zone starts, he’s had a severe drop off in his shots for per 60 minutes (SF60). 23.4 is the lowest mark of his career, down from 30.2 just two seasons ago and a career average of 29.3.

Despite the drop off in shots, there is still evidence to make a potential suitor believe they can tease more goals out of Glencross. That’s great if they can, but if they can’t, what else does he offer?

If a contender is going to acquire Glencross, it’s unlikely that he’ll be a top six player. If a team is competing for the Cup, they should have a top six that may block the way for Glencross. That’s the situation for almost all the teams on his list. A great benefit of Glencross is that if you put him on your third line, he’s capable in that slot and has the ability to play up to the second line.

But if that’s the situation, it’s tough to expect his usage to change a whole lot. Do you like the numbers he’s posting with this usage? It’s not great and it gets worse when you make the situation a little less cloudy.

As of February 12, his usage adjusted Corsi was 48.2%, according to Domenic Galamini‘s numbers. His dCorsi (difference between expected Corsi and observed Corsi) is 1.66, a very low number that basically makes him a low impact player on the third line.

I’ve said a couple of times as well that he’s had better years recently, but if you add up the last three seasons, here’s how Own the Puck’s HERO charts lay out his numbers: 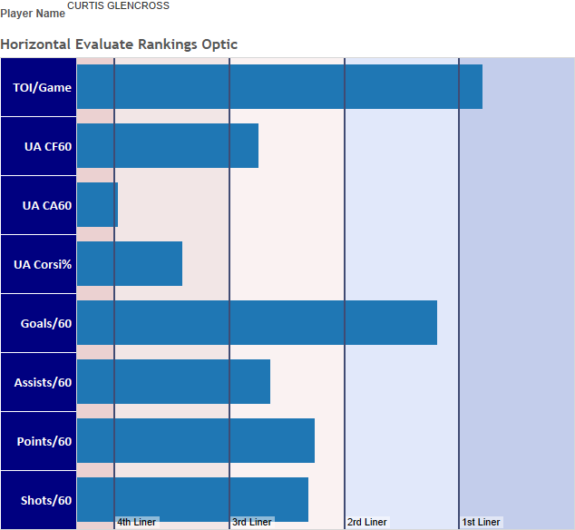 Glencross can score goals, but the rest of his numbers make him a middle of the road third line player. So, if his goals are drying up, what else do you hope to get from him?

That gets to the heart of the problem. You can explain the lack of goals, though there should be some alarm bells ringing when you see the drop-off in shot production. But if you can’t ignite his scoring touch, you may have a player in a depth position who you can’t trust in all situations and who may be unhappy with his deployment.

Even if you can reignite his offensive touch, defense wins championships. Unless you’re going out to acquire Martin St. Louis or Marian Gaborik, you’re probably better off looking for players who you know you can at least trust defensively. A player like Sean Bergenheim, for instance, might be a better bet. (Who I talked about previously.)

It makes sense for the Flames to move him, knowing that he won’t be re-signing. It’s a tough situation, since they still have playoff hopes and they aren’t likely to get a piece in return that will help their chances this year. But that’s ok for the Flames. They’re still rebuilding and draft picks are valuable.

Maybe if the asking price is low enough a team like Pittsburgh may believe they can bounce him between the third and fourth line and that in that instance he’d be a worthwhile investment with the potential for some good upside. But many of these contenders have given up so many picks in recent trades that Glencross might not be worth the tradeoff if it doesn’t work out how they planned.

Glencross’ UA Corsi and overall Corsi Against are not good signs at large, especially with the role he’s likely to fill and the need for players who can absorb lots of d-zone starts and still be able to get the team out of bad situations. You want guys who you can start in the defensive zone, who are able to turn the tables on the opposition, carry the puck out, and set up possession in the offensive zone so that your top lines can go to work in an optimal situation. Glencross isn’t going to provide that.