In the final home series of the 2018-19 season at Oceanside Ice Arena in Tempe, the Arizona State Sun Devils hosted the American International College (AIC) Yellow Jackets in Game No. 1 of the weekend back-to-back between the two teams on Friday night. Although they surrendered the first goal of the game less than two minutes into the opening period, the Sun Devils controlled the play the rest of the way, and, led by Ottawa Senators prospect Joey Daccord in goal, Arizona State neutralized the Yellow Jackets’ attack and collected a 4-1 victory on home ice.

The win, Arizona State’s 20th of the season, is a significant accomplishment – it’s the school’s first 20-win campaign since moving up to the NCAA level in 2015. It’s a huge step forward for the Sun Devil hockey program, which won just 23 games during their first three seasons combined as they made the transition from ACHA club hockey to NCAA D-I hockey. 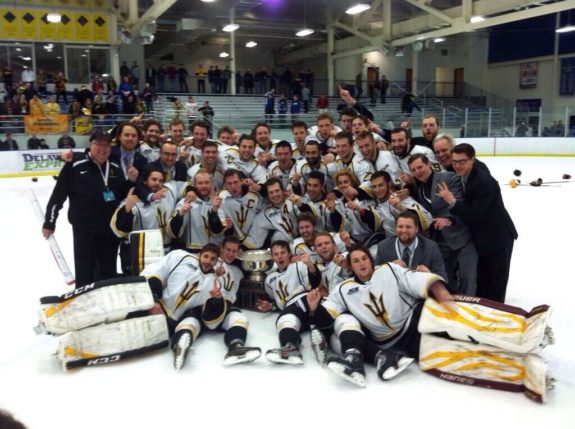 From ACHA National Champions in 2014 to the top-15 of the NCAA in 2019, it’s been quite the ride for the Arizona State Sun Devils over the past five years.

Before Friday’s win, the Sun Devils occupied the No. 12 spot in the NCAA top-25, and they could climb even higher in those polls if they’re able to complete the weekend sweep over AIC with a victory on Saturday night. Barring a late-season swoon, a spot in the 2019 NCAA tournament seems likely, and, led by Daccord, the Sun Devils have as good a chance of taking home the title as any team in the nation.

In front of a capacity crowd at Oceanside, the Yellow Jackets took an early lead just 1:36 into the game, as junior forward and alternate captain Joel Kocur got behind the Sun Devils’ defense and beat Daccord on a breakaway with a nice move for his seventh goal of the season.

However, AIC’s lead would be short-lived, as the Sun Devils quickly took advantage of their first power play opportunity of the evening. With Elijiah Barriga in the box for interference, Arizona State controlled the puck for the majority of the power play before Demetrios Koumontzis found leading goalscorer Johnny Walker, who beat Yellow Jackets’ goaltender Zackarias Skog five-hole to tie the game at one.

Johnny Walker is more than just a piece of the winning puzzle for ASU hockey.

He is becoming the face of a southwestern hockey program that some don’t even know exists. https://t.co/f5TYJwK2yS pic.twitter.com/yRUIqEGuhm

Walker, a 22-year-old sophomore out of Phoenix, AZ, has had an outstanding second season with the Sun Devils. He led Arizona State in goals last year with 17, but has upped his scoring pace in 2018-19 – Walker leads all NCAA skaters in goals this season with 23 in 30 games. He’s one of just three Arizona State players (along with defenseman Brinson Pasichnuk and forward Dylan Hollman) to have reached the double digits in the ‘G’ column on the statsheet, and Walker is also tied with Quinnipiac defenseman Chase Priskie in power-play goals on the year with nine. It’s safe to say the Arizona State offense (and man advantage) runs through No. 7.

Aside from his goal, Walker was able to generate quality chances all night – he owns a powerful shot and showcased his stickhandling abilities as well. During the second period, Walker absolutely undressed Yellow Jackets’ defender Nicolas Luka in the second period and nearly scored a shorthanded goal during a delayed penalty situation. He likely won’t win the prestigious Hobey Baker Award this year as he has only 10 assists to go with his 23 goals, but Walker definitely deserves an All-American nod as the leading goalscorer in all of college hockey by a wide margin (the next-closest player has 18 goals).

In a whistle-filled second period, the Arizona State penalty kill continued to lock things down, which enabled the offense to score two quick goals in the closing minutes. After successfully killing two penalties and ending two other AIC power plays by drawing two-minute minors earlier in the game, the Sun Devils then turned on the offense – during a 4-on-4 situation late in the middle frame, American International got caught up the ice by ASU’s Josh Maniscalco and Demetrios Koumontzis, who skated in from center ice with a clean 2-on-0 on Skog. Maniscalco, a defenseman, and Koumontzis, a forward and Calgary Flames prospect, had all day to set up their scoring chance, and it eventually was Koumontzis who buried the goal, his third of the season.

An 18-year-old freshman, Koumontzis was selected in the fourth round, at No. 108 overall, by Calgary in 2018. He, along with Daccord, are the two Sun Devils with current ties to NHL clubs. With three goals and 13 assists in 31 games on the year, Koumontzis likely will spend a few more seasons in Tempe before starting his professional career. With the upcoming graduations of senior forwards Dylan Hollman and Anthony Croston, Koumontzis will likely have a chance to earn more minutes next season. His shooting percentage of 6.0% also leaves room for improvement – it’s not hard to see Koumontzis taking a huge step forward in his development next year in Tempe.

Just 1:13 after converting their 2-on-0, the Sun Devils struck again. After assisting on Koumontzis’ earlier goal, Maniscalco scored one of his own – with the Sun Devils on the power play, the freshman defender pinched down from the blue line and pounced on the rebound from a Max Balinson attempt. Maniscalco dove in an attempt to reach the puck before Yellow Jackets’ defender Kyle Stephan could get a stick on it, and the Sun Devil indeed won the race to the puck and put it past Skog into the top corner to give ASU a 3-1 lead. The goal was very impressive live, and has to be seen to be believed:

IT'S BASEBALL SEASON! @jmani_18 with the head-first slide & slap for the goal! #SCTop10 pic.twitter.com/aPnca5DQOG

Buoyed by the two quick goals to end the second period, the Devils locked things down in the final 20 minutes – they killed another AIC power play (which came just 13 seconds into the period) to improve to a perfect 5-for-5 on the penalty kill on the night, drew two more penalties, and ultimately iced the game with an empty-netter as Hollman skated in all alone and buried it to provide the final tally in a 4-1 Arizona State victory. With the win, the Sun Devils improved to 20-10-1 on the year, and increased their winning streak to four in a row.

While the Sun Devils did more than enough in the offensive zone on Friday night to earn the win, the story of the evening was Arizona State’s junior goaltender Joey Daccord. A seventh-round selection of the Ottawa Senators back in the 2015 NHL Entry Draft, Daccord made 23 of 24 saves on the night to earn his NCAA-leading 20th victory of the season. Daccord has been Arizona State’s workhorse in goal all season long – he’s been on the ice for 1851 of 1859 possible minutes this year, and, despite the workload, he’s showing no signs of slowing down any time soon.

ASU Men's Hockey: Joey Daccord isn't sure if this will be his last year of college hockey yet. But if it is, he'll be going out as one of the country's most dominant goalies, thanks to years of hard workhttps://t.co/DU2RPYbnz0 pic.twitter.com/H3WXbTHjur

There are never any guarantees in hockey, but, if Daccord turns pro following a superb junior season, it appears as if the Senators may have hit the jackpot with their seventh-round selection. Of course, given the current state of Ottawa’s NHL franchise, Daccord could go the “Jimmy Vesey route” – he could elect to return to Arizona State for his senior season, then enter the NHL as an unrestricted free agent in 2020.

Either way, Daccord and the Sun Devils are focused on the present – qualifying for the NCAA tournament and bringing the championship trophy home to Tempe in 2019. With the nation’s best goaltender manning the crease, don’t sleep on Arizona State in the postseason.