The San Jose Sharks’ record stood at 9-8-1 after 18 games. Over the next 17 games, they have been one the top teams in hockey, compiling a sizzling 13-4-0 record. This includes four wins in the extra sessions – two wins in the shootout and two more in overtime.

The San Jose Sharks have ridden a strong defense, strong goaltending and excellent overtime results to the top of the Pacific Division standings.

For San Jose, the defense and goaltending have been stellar all season. The Sharks have allowed three or fewer goals (excluding empty-net goals) in 33 of 35 games. In almost every game this season, the Sharks have given themselves a chance to win.

The Sharks have lost a dozen games in regulation in 35 games played. They have been “blown out” exactly once this season: a 5-0 loss to the Pittsburgh Penguins. That game and a 3-0 loss to the Detroit Red Wings back in October (among San Jose’s worst games of the season) are two games that stand out. They are the only games this season in which San Jose was not, at a minimum, highly competitive late in the game.

The Sharks have been close in every other loss. In each of their other 10 losses, they have been within one goal with under 10 minutes left in the game. Two games where the final score looks like potential lopsided losses — a 7-4 loss versus the Rangers and a 4-1 loss versus Chicago — were one-goal games with under three minutes left.

The reason the Sharks are in games is simple. Outside of the aforementioned Ranger and Penguin games, San Jose has played smothering defense and their goalies have allowed just 62 regulation goals in 33 games. 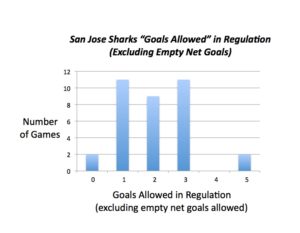 By playing low-scoring games, the Sharks give themselves a chance to win almost every time they play. Again, the results tell the story. When giving up two or fewer goals in regulation (excluding empty-net goals), San Jose is 20-1-1, grabbing 41 out of a possible 44 points. But give up three or more goals, and the record plunges to 2-11-0, just four points out of a possible 26. 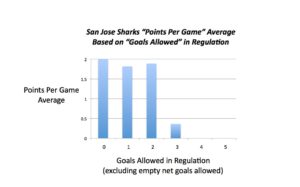 Low-scoring games should also lead to a larger-than-average number of overtime games. While this has not occurred, the extra sessions have still been very good to the Sharks. The Sharks’ record in regulation is 16-12. Without the overtime results, the team is modestly above average. But when the game is tied after 60 minutes, San Jose has been stellar. They have won six of seven: a 4-1 win/loss record in overtime along with a pair of shootout wins.

Goalie Martin Jones has mind-boggling career shootout numbers (.861 save percentage). So good, in fact, that it might make sense for San Jose to simply play ‘keep away’ with the puck for all five minutes of overtime and let Jones close out the win in the shootout. It is a strategy I felt the Sharks (and certain other teams) might consider when three-on-three overtime was adopted for last season. Though the Sharks have not adopted this approach literally, they have adopted this approach in spirit. San Jose takes a very cautious approach to overtime play. They are very careful with the puck and only take premium shots.

The last two overtime wins highlight the Sharks’ cautious approach. These were games against division rivals Edmonton and Anaheim. In both games, the Sharks won the opening faceoff and never gave control of the puck to their opponent. In both games, the first shot on goal in the overtime proved to be the game-winner.

What is notable, though, is how long San Jose possessed the puck. Against Edmonton, it took 3:24 before Kevin Labanc broke in alone on Cam Talbot for the game winner. Against Anaheim, the winner came at 2:46 of overtime, with Brent Burns in alone against goalie John Gibson. Combined, that’s over six minutes of three-on-three play with the other team never possessing the puck.

The Sharks played extremely low-risk hockey, backing out of the offensive zone as needed to reset the offense or make line changes. As opposed to the wide-open style of play often seen in three-on-three hockey, the Sharks play a waiting game. Instead of forcing the action, they apply pressure while waiting for an opponent to make a major mistake. It may not be the style the NHL prefers to see, but it is effective for San Jose.

Overtime in the Pacific Division

The Sharks’ record after 60 minutes of play has a lot to do with where they sit in the standings. The Oilers have played 10 overtime games, but sport a 4-6 win/loss record in the extra sessions. In regulation, they are 14-12, barely behind San Jose. Anaheim sports the same record as San Jose in games decided in regulation: 16-12. In the eight games which have gone past regulation, though, the Ducks are 1-7. The Sharks’ edge in the standings over Edmonton and Anaheim is directly traceable to the Sharks being more successful in overtime and shootout games.

Two other Pacific teams, however, have kept themselves in the playoff hunt because of their overtime work. The Kings are 7-4 in the extra session while sporting a regulation record of 10-13. The Kings have kept themselves alive with their work in overtime. Calgary has played seven overtime games, with five wins and two losses in the extra sessions. In regulation, the Flames are a modest 14-16.

NHL games go into overtime roughly a quarter of the time. The Sharks have played fewer overtime games than most teams, though their low-scoring style would typically lead to more overtime games than average. The extra sessions have been a big friend to the Sharks. They would be tied with Anaheim for the Pacific lead and slightly ahead of Edmonton based only on regulation results. Because of their success after regulation ends, the Sharks hold solid leads over both teams.

A strong defensive game, first-rate goaltending and a dominant record in overtime/shootout games is a formula for regular season success. This formula is serving San Jose well.