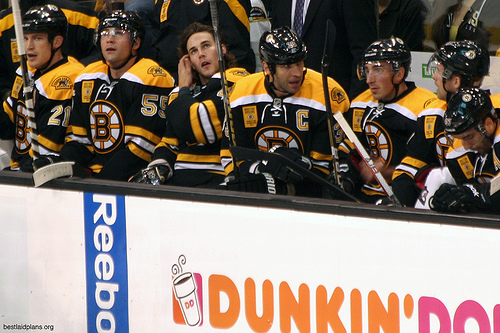 A Message from the Surgeon General:

Are you a resident of the Boston Metropolitan Area? In recent weeks, have you experienced: Fatigue, Depression, Nausea, Confusion, Decreased Libido, Hallucinations and Hair Loss? Do you watch or attend (or participate in) Boston Bruins games one or more times in a given week? Has your excitement at the beginning of the Bruins’ 2011-12 championship defense degraded into an apprehensive muddle?

If you answered yes to the above, you may be suffering from Stanley Poculum Crapula, a dangerous ailment which has become endemic within the Bostonian hockey-loving community.

If you are one of the few in the New England region not afflicted by this ailment, you may have noticed a disconcerting din in and around the towns and cities of Massachusetts, Rhode Island and elsewhere in the region.

It is the collective retching of Bruins Nation as it experiences the furthest depths of the illness known colloquially as the “Stanley Cup Hangover”. It is a cousin of the familiar but far less dangerous Stanley Poculum Febris (where fever, mania and euphoria were common symptoms) and has been seen in populations from the Carolinas to Chicago in recent years.

While not easily transmissible, the affected should avoid discussing the events of previous days’ games with coworkers and family members (particularly young children). Avoid Hi-definition TVs and Sports Bars. Absolutely keep a safe distance from TD Garden and the Bruins’ practice facility in Wilmington, MA.

Aside from distributing Irish coffee en masse to the afflicted New Englanders, the suggested therapy is change or at least the threat of change. Change should be applied liberally to the affected area and repeated until the issue is solved.

Alternatively, if minor/superficial changes are unable to assuage the symptoms, doctors recommend systemic changes including but not limited to: Trades, scratching underperformers, and even management shakeups for the desired result.

Current suggested treatments include excising the most seriously afflicted tissue: The Node of Krejci has been suggested as a possibility, but the hockey medical community is concerned that its importance is just too great to consider removal.

While no surefire vaccine for SPC is currently available, doctors and sports microbiologists are working around the clock for a cure. Current experimentation (by the CDC’s Peter Chiarelli, MD) indicates that an infusion of new, offensively-talented blood might be enough to eliminate the malaise. Only time and further testing will determine the success of this new therapy.

If you’re not one of the affected, you can protect yourself! Avoid discussing the Bruins, their recent championship or even hockey in general as conversations may move toward the more contagious subjects. Keep a sunny demeanor and avoid thinking long on the B’s wretched beginnings in 2011-12. If you must for any reason discuss the Boston hockey franchise, immediately turn the subject to Tyler Seguin – who, as the lone standout for the Black-and-Gold, is a topic free from contamination.

To the region’s health care professionals: Be advised that recent and future events might create an even more dire situation in the community. Saturday night, events in Montreal might unfold that plunge the afflicted further into the malaise of Stanley Poculum Crapula.