Remember when Pittsburgh Penguins’ captain Sidney Crosby speared Buffalo Sabre Ryan O’Reilly in the groin? It’s considered by most non-Penguins fans as one of the greasiest moves of this generation. At least, that would be a reasonable conclusion considering how much it was talked about. This incident obviously struck a cord in the hockey world.

There were the usual social media death threats on Crosby and prayers for a career-ending injury. Who would do such a thing? That kind of action is over the line. You don’t mess with another man’s groin. My favourite was the tweet asking where you can sign up to pay $2569.44 to spear Crosby.

It also sparked some great conversations about whether stars are given special treatment and whether it should be given. It triggered awareness for how slack the NHL has historically been when punishing stick offenses and spears in particular, hence the aforementioned $2,569.44 fine.

Who Sets the Standards?

Is there a double standard depending on player popularity? Perhaps, but if that double standard does exist, it isn’t just held by the NHL or the media. It’s also held by the fans. Everyone has a team they blindly defend. Everyone has that one player who can do no wrong and that one player who can do no right. That’s part of being a fan, and it’s beautiful. The Crosby poke on O’Reilly transcended all that. Everyone had an opinion. The Buffalo News covered the perceived NHL Crosby bias, fan reaction, and the inconsistency of the NHL’s Department of Player Safety perfectly.

You’d think the blow up caused by Crosby’s version of whack-a-mole, would mean a second occurrence by anyone would cause a riot among fans. Now, imagine if it actually happened to Crosby? New rules would be invented. Suspensions would be unprecedented. The Earth itself would implode.

Believe it or not, in Game 7 of the Eastern Conference Final between the Washington Capitals and the Pittsburgh Penguins, that’s precisely what happened. In exactly the same type of from behind play, Crosby was on the receiving end of a stick to the nether regions. That stick belonged to Capitals forward Nicklas Backstrom. There was no penalty on the play.

The Sound of Silence

On the one hand, it could be said this was karma coming back to haunt Crosby and his dirty ways. It’s hard to whine about it when he also got away with it. On the other hand, it could be said this proves there’s no bias to protect Crosby. He was yet again the victim of something that just a month and a half ago was considered a dangerous, classless, boundary stepping act, and the NHL did nothing about it.

Both sides could have a lot to say here, but that’s the point. Whether or not Crosby should have been suspended when he did it, at least it got people to say something. Now that Backstrom has done, there’s a deafening silence on the issue. 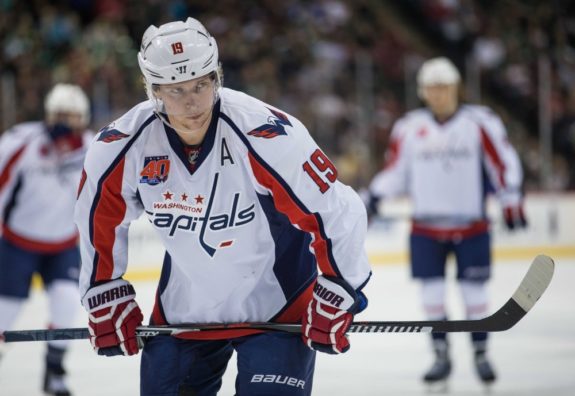 Where are the attackers who want to see Backstrom burned at the stake for ruining the integrity of the game? Where are the fence sitters who agree that while Backstrom isn’t generally a bad guy, he should probably sit a game or two for this? Where are the defenders who think plays like this are just part of hockey? Where are the countless videos and GIFs for folks to scrutinize? They don’t exist.

There’s no easy explanation as to why this Backstrom act didn’t ignite a violent social media storm when an earlier similar one did. There’s no reason the fans shouldn’t have weighed in here in May like they did in March. Backstrom isn’t exactly a low profile player. He’s a genuine first class player and person who should be held under the star biased microscope. How was he let off the hook? Plus, his target was both the most loved and resented player in the world.