As the top goaltending prospect available in the 2017 NHL Entry Draft, all Oettinger did during his true rookie season with the Boston University Terriers was lock down the starting job as a 17-year-old. Oettinger’s excellent statistical season with a loaded BU squad ended with a .927 save percentage and a 2.11 goals-against average. Solid work for a freshman who didn’t turn 18 until after he secured down the starting job.

Physically, Oettinger is an imposing netminder. Standing 6-foot-4 and weighing over 200 pounds, Oettinger already has the size NHL general manager love to see in a goalie. That same large frame, coupled with a technically sound foundation, is an excellent base line to start with as teams look for a future starting netminder.

Oettinger is a proponent of eye training and already during the summer, he has worked in this emerging training opportunity. The Lakeville, Minaossota native moves efficiently around his crease and quickly gets his feet set and ready for the shot attempt. He is not overly acrobatic when making a save but that’s the idea: positional saves are far better than wild attempts to stop the puck.

Mentally, Oettinger is a very down-to-earth young man. He approaches the game with a very level head and maintains his composure, at least outwardly. Whereas some goalies have to make every save, Oettinger is just trying to make the next save. Oettinger will get plenty of practice time over the next few years at Boston University, but game time is key for the development of any goalie.

Another plus is the quality of play Oettinger has faced over the last few years. He spent two seasons with the NTDP playing with the best the United States has to offer every day in practice like Kieffer Bellows, Clayton Keller, and Adam Fox while playing against college players as a 17-year-old. Oettinger will get plenty of practice time over the next few years at Boston University, but game time is key for the development of any goalie.

Projecting draft-eligible goaltenders is a dark art. But for teams that are willing to dabble in the voodoo that is 18-year-old prospect goalies, Oettinger is the best available in the 2017 NHL Entry Draft.

“He’s an unbelievable kid. He’s one heck of a goalie. I love his desire. He’s got an incredible desire to be the best goalie he can be. … His attention to detail is unbelievable. He’s always looking to get better. His composure, his demeanor, it’s already pro-like.” – Boston University head coach David Quinn

“I think there is a fine line between super weird goalies, and I think I’m more on the end of pretty normal goalies. I think having a coach like Danton Cole really tested me mentally every single day. I think being with him for two years definitely helped my mental strength, and the stuff I learned here is really going to carry over throughout the rest of my hockey career.” – Jake Oettinger

“Oettinger has the size (also 6’4″), the technique, and, according to his head coach, the mental fortitude required to be a top goaltending prospect. Not only that, but Oettinger has also been developing in incredibly advantageous environments, first with USA Hockey’s National Team Development Program and now with Boston University, one of the top programs in college hockey.” – Derek Neumeier

The former U.S. National Team standout has all the tools to become a starting goaltender in the NHL. That said, goalie development is a dark art. 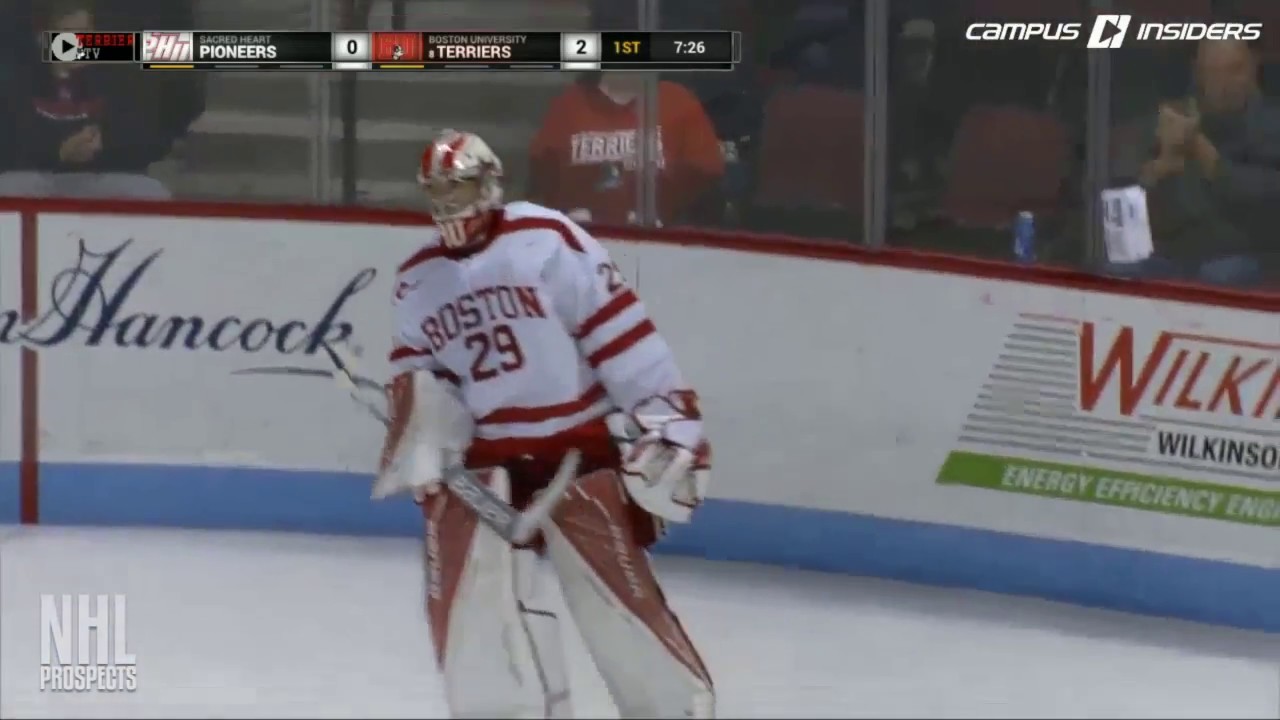