Recently Mike Babcock was asked about the “Gold Plan” apparently thought up by Shane Doan of the Arizona Coyotes to fix the draft lottery system. However, Babcock answered with an idea of his own.

“The whole league is set up to help the bottom feeders… We have a salary cap, do we not? So, if there was no salary cap, the Toronto Maple Leafs could go out and spend as much money as they wanted, could they not? And as long as you made the money you could spend it. Now, I like that. That’s my political background. That’s what I believe in in life, but that’s not the way the league is run. So let’s fix that first and then we can get into the draft.”

So Babcock wants the salary cap to be abolished. When you consider how the cap has affected the Maple Leafs, you can see why that would be a popular opinion in Toronto.

Since the salary cap was introduced for the 2005-06 season, the Leafs have only made the playoff once. Beforehand, the Leafs were able to spend as much money as they wanted and it usually worked out to some degree. Of course, they never won the Stanley Cup but they did make two Conference Finals in a four-year span from 1999 to 2002. 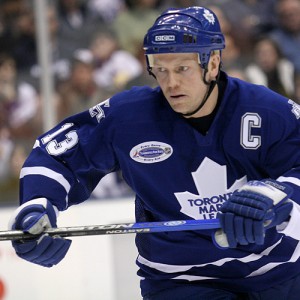 Mats Sundin was a great Leaf,but he also caused some problems after the cap was introduced. (Mike Lynaugh Photography)

Of course, the problem back then was that the Leafs management would give big contracts to older players near the end of their careers. Those contracts usually included no-movement clauses that caused a lot of trouble after the cap was introduced. Of course, Leafs fans all remember when the Leafs were trying to trade players like Mats Sundin and Tomas Kaberle and they vetoed possible trades. Kaberle eventually accepted a deal to Boston, but not before saying no to a trade that would have sent him to Philadelphia for a package that included a young Jeff Carter.

If the NHL removed the salary cap now, would the Leafs just fall back into the same mistakes? The answer is no. You have to think that with the management the Maple Leafs have in place now would still be smart with how they spend money. They would still still be trying to develop prospects the right way. There would only be positives in that the Leafs (and other teams) would be able to more easily keep their young players when they reach free agency.

Now, let’s look how the removal of the salary cap would affect the other 29 teams. The cap currently stands at $71.4 million, which places the floor at $52.8. Now, there are not any teams that are simply spending just above the cap floor like there have been in years past. However, there are 10 teams that spend less than $5 million under the cap. Three of those teams are in the playoffs. They are the New York Islanders, Anaheim Ducks and Nashville Predators. Obviously, teams can ice a winning team. All three of them are pretty good teams that made the playoffs last season and will again this season.

On the other side of the coin, there are 11 teams that spend over $70 million. Of those teams, three of them will not make the playoffs this season, the Vancouver Canucks, Montreal Canadiens and the Maple Leafs. That group could grow to four if the Boston Bruins or Detroit Red Wings don’t take the final wild card spot in the Eastern Conference. So spending to the cap doesn’t guarantee winning either.

It would also help teams that are forced to choose between losing a superstar or signing a few players. A team currently going through this is the Tampa Bay Lightning. We all know that Steven Stamkos is set to become an unrestricted free agent on July 1. Of course, they would love to sign him but there are complications. Set to become free agents of either kind this offseason or next include Victor Hedman, Ben Bishop, Tyler Johnson, Ondrej Palat, Alex Killorn, Vladislav Namestnikov and Nikita Kucherov. Signing Stamkos would severely decrease the chances of signing the others.

So the removal of the salary cap could help all teams, not just the Leafs. Some teams set their own cap based on the owner’s decision. More than a few teams in the past have had to fight just to spend past the cap floor. Maybe Babcock is onto something.