There are two teams in the NHL’s Eastern Conference that are very hot and could be headed for an appearance in the Stanley Cup Finals. Fans of the Washington Capitals and the Pittsburgh Penguins can make a legitimate case in believing that their team will be representing the East. However, there is a key that tilts the scales in favor of the Caps, and that key is Braden Holtby.

Clearly Holtby has a season worthy of strong consideration for the Vezina Trophy, given to the NHL’s outstanding goaltender. The numbers show 47 wins in 65 games played, a .921 save percentage and goals against average of 2.22. While Holtby has faded a bit since the All-Star break, his play over the course of the season has been outstanding.

Braden Holtby looks like a goalie who is 46-9-4 and making room for a Vezina Trophy.#WSHvsPHI

Yes, there are others worthy of strong consideration for the Vezina Trophy – namely Brian Elliott of the St. Louis Blues and Ben Bishop of the Tampa Bay Lightning. Holtby may or may not win the trophy, but he has helped his team do a lot of what’s important in the playoffs, and that is winning and winning a lot.

Scott Cullen at TSN wrote on April 7 that the wins may give the nod to Holtby, but that he personally likes Bishop. According to Cullen,

“I’ve been resigned to Holtby winning the Vezina for some time, whether fully warranted or not, but my vote this season would go to Bishop.”

So then why am I not speculating a Lightning versus Penguins scenario if Bishop may have had a better season? Because right now I see the Capitals and the Penguins fighting it out along the way, with the winner of their series going on to make it to the Cup Finals. And if that series occurs, I see Holtby as the key that gives the Caps an edge over the Pens.

A Fleury of Concern 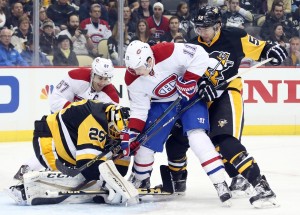 Penguins goalie Marc-Andre Fleury has missed the Penguins’ last few games due to a concussion. He is likely to not return until the playoffs with Pittsburgh to play their opening game on the 13th or 14th of April. This break will give Fleury additional time to recover.

But, I believe the edge goes to Holtby for a couple of reasons. First, as I wrote way back in November in a piece about the Montreal Canadiens, an injury can derail even the fastest of trains. In my “Habs’ Hopes of Hoisting Cup Hinge on Price’s Knee” I pointed out that Carey Price’s injury could very well be the up or down to Montreal’s season.

Do you remember their torrid start? It looked like they were going to run away with it all right up until Price got hurt. The impact of that injury rippled through the rest of the Habs’ season, and now they are not even in the playoffs.

Fleury may be back for the playoffs, but what lingering effects from the concussion will be there? More importantly, will those effects impact his confidence and ability to go all-out in the playoffs? To me, this is one reason that points to a healthy Holtby being a key that could propel the Capitals past the Penguins in a playoff series.

I wrote a month ago that the “Penguins Playoffs Ride on Fleury.” I still believe that to be the case. After helping the Pens win the Stanley Cup in 2009, Fleury has come under much scrutiny for his performance in the playoffs since. Whether or not that scrutiny is valid is up for debate, but it is there nonetheless.

Of course, Fleury has had a stellar season, and is in large part why the Penguins are making their 10th playoff appearance in a row. But, his questionable playoff performance in the recent past, combined with Fleury’s recent concussion makes me believe that Holtby has the edge between the pipes in any potential playoff series between the Capitals and Penguins.

Both teams are hot and have outstanding, high-scoring offenses. Both teams have Cup-worthy defenses. It comes down to the performance in the net, and from where I sit; Holtby will be the key to the Capitals’ hopes of advancing past the Penguins.