Dylan Gambrell looks up to Joe Pavelski — perhaps for a reason.

Both are centers. Both were overlooked in the draft (Pavelski waited until the seventh round in 2003 and Gambrell was passed over entirely — twice). And both have a desire to fight and overcome the odds.

Gambrell, the Sharks’ top pick in the 2016 draft, was selected 60th overall, is 19 years of age and was a true freshman last season at the University of Denver.

“Being passed over twice, I took it as a learning experience,” Gambrell said after the Sharks’ development camp wrapped up last week at Sharks Ice in San Jose. “Maybe a little bit of motivation to keep pushing and try to keep getting better every day.”

Some call the pick a bit of a reach by the Sharks. Gambrell himself was expecting to be picked anywhere from the second to the fifth round.

“I really had no idea,” he said on where he thought he would be selected. I was hearing so many different things leading up to it … I was pretty open-minded. I just wanted to see what happened and fortunately, I went in the second [round] to the Sharks.”

A two-way player who is “reliable in all three zones,” according to his coach in juniors, Gambrell may not be projected to be a franchise-altering stud. But this looks to be a “safe” pick in that he could be NHL-ready faster than most prospects. 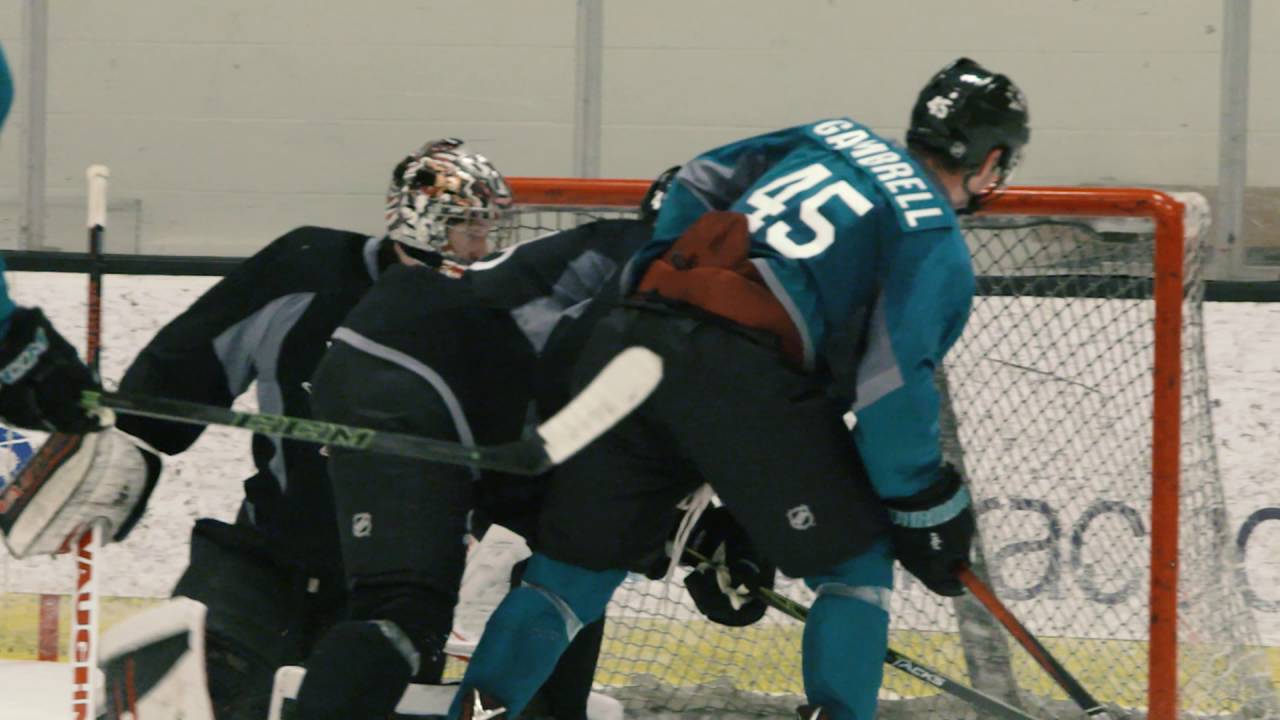 Gambrell broke through last season in college, putting up 47 points in 41 games and receiving plenty of ice time as a freshman. He centered the line known as the “Pacific Rim” line, flanked by Danton Heinen, a sophomore, and Trevor Moore, a junior.

“I grew so much last year,” Gambrell said. “Playing with [guys who are] older, bigger, stronger and faster, you’ve got to jump into it, make the most out of it. I was fortunately enough to play with two good players. I was able to learn from them. They brought me on at the beginning of the season. We gelled together very well.”

Roy Sommer, the head coach of the San Jose Barracuda who ran the development camp, was impressed immediately when he saw Gambrell.

“I noticed him right off the bat, just his speed and tenacity,” he said. “He gets after it. He’s got a good shot. He’s around the net. He thinks the game well, just from the four days I’ve seen him. He’s the real deal. For a freshman to do what he did at a good school, it’s tough to do. I can see why he achieved that.”

The 6-foot, 185-pound right-hander grew up in the Seattle area but grew up a Sharks fan. Considering his parents hail from San Diego, being drafted by a West Coast team was ideal.

He’ll now get a chance to play for his favorite team and perhaps even share ice time with the player who he models his game after. He touts his playmaking and vision as his strengths and — while we’re not getting ahead of ourselves — his deflection for a goal off a shot from the point in the Sharks’ prospects scrimmage last week was Pavelski-esque.

For now, Gambrell will return to school in Denver for his sophomore season and keep raising the same eyebrows he did in his freshman campaign, centering the first line on a team that reached the Frozen Four a year ago.

“I like to think that I worked my way out there,” Gambrell said on his role. “I was given a chance to get on that line, and I made the most out of it.”

Now, it remains to be seen whether that statement will apply to the next level — the NHL.

Eric is a journalism student at the University of Southern California and a sports editor at the Daily Trojan. He grew up in the Bay Area and has followed the Sharks since a young age. He served as a beat writer on the team for SFBay.ca during the 2014-2015 season. Previously, Eric has worked at FanSided and Bleacher Report.