Before the 2015 NHL Draft had reached its official conclusion, the Edmonton Oilers had already enjoyed one of the most successful, and inspiring periods of change in recent history.

In a matter of hours, the Edmonton Oilers, led by new General Manager Peter Chiarelli, made a number of drastic, yet necessary and impressive improvements to a perpetually poor team. Unlike in previous seasons under other management groups, the Edmonton Oilers entered the 2015 NHL Draft with a distinct plan and purpose: to address major team needs, in particular on defence and in goal.

By the end of the draft on Saturday, the Oilers had done exactly that.

Breaking Down the Oilers’ Draft

In terms of the draft itself, the Edmonton Oilers were extremely successful not only in which players they selected, but also in the trades they made with the many picks the owned.

When looking at those selected in the draft, the Edmonton Oilers’ direct was once again definitively clear.

Yes, they took Connor McDavid, a centre, with their first overall selection, as a player with McDavid’s skill and unparalleled potential would have been, quite simply, idiotic to pass up. However, following McDavid, the Oilers followed their game plan from the outset, focusing strictly on defense and goaltending.

With their first selection since the first round, the Oilers selected their first defenseman of the draft, Caleb Jones of the U.S National Under-18 Team of the United States Hockey League. The younger brother of Nashville Predator Seth Jones, Caleb is a 6 foot, 195 pound defender who plays a game similar to his older brother.

Ranked 97th in the draft by Central Scouting, the Oilers landed a potential steal in defenseman Ethan Bear. A 5 foot 11, 200 pound Seattle Thunderbird sophomore, Bear is a strong defender who has an offensive edge to his game.

Yet another defenseman, Josh Marino is a 6 foot, 170 pound member of the South Shore Kings of the United States Premier Hockey League. Similar to Bear, Marino could be a tremendous pick by the Oilers, as he was ranked 63rd by Central Scouting yet fell to the Oilers at 154.

With the fourth last pick in the 2015 NHL Draft, the Edmonton Oilers selected goaltender Miroslav Svoboda. Unranked by Central Scouting, Svoboda has solid size for a goaltender at 6 foot 3, 180 pounds. Most recently, Svoboda played for Trinec of the Czech Republic Junior Hockey League, where he recorded a 2.19 GAA and .938 SVP in 37 games played.

The final defenseman selected by the Edmonton Oilers, Ziyat Paigin is a towering 20 year-old defender at 6 foot 6, 210 pounds. In 2014-15, Paigin played 33 games with Kazan Ak-Bars of the Kontinental Hockey League, recording a goal and an assist.

The manner through which the Oilers made the greatest improvements to their roster was through trades.

In total, Edmonton made four trades in under 24 hours, transactions which significantly altered the Oilers’ roster heading into the 2015-16 NHL season.

Griffin Reinhart in exchange for Draft Picks #16 and #33 Overall

This was a major move for the Oilers, significantly so because it illustrated the Oilers’ willingness to focus on the now, rather than the future while once again addressing the major needs of their team.

Reinhart, who has often been compared to Ryan Suter of the Minnesota Wild, projects to become a top-2 defender in the NHL. The fourth overall selection in the 2012 NHL Draft, Reinhart returns home in a sense, having played four seasons with the Edmonton Oil Kings of the Western Hockey League.

At 21 years old, Reinhart appears ready for full NHL playing time, having played eight games with the Islanders this past season. 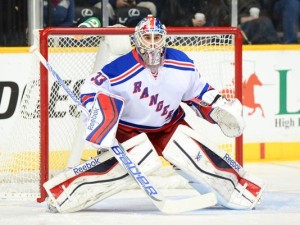 In what was the biggest move of the day for the Oilers, if not the NHL, Edmonton landed a legitimate starting goaltender in Cam Talbot, addressing one of, if not the biggest needs in Edmonton moving forward.

A potential NHL starting goaltender who had been stuck behind Henrik Lundqvist in New York, Talbot finally gives the Oilers a solid option in the crease, despite being slightly older than his fellow teammates at 28 years old. With one season remaining on his contract, it remains to be seen whether the Oilers will sign Talbot to an extension in the coming days or, more realistically, extend Talbot towards the conclusion of the 2015-16 season, depending on his performance.

In terms of the picks given up by the Oilers, the eventual asking price of the Rangers was much lower than originally determined. After looking for a first round pick or two second round selections, the Oilers remained patient, eventually landing Talbot for second, third and seventh round selections.

In the smallest of Oilers moves, Edmonton moved out defenseman Martin Marincin in return for the 107th overall selection and minor league forward Brad Ross.

Eric Gryba in exchange for Travis Ewanyk and Draft Pick #107

In the Oilers’ final deal of the day, Edmonton added defenseman Eric Gryba from the Ottawa Senators. Gryba, who is 27 years old, has one year remaining on his current contract before he becomes a free agent.

A physical, big bodied defender at 6 foot 4, 225 pounds, Gryba will act as a solid upgrade on the Oilers’ improving back end whose presence could help ease Darnell Nurse and Griffin Reinhart into bigger NHL minutes. Gryba won’t produce a ton offensively, yet should be a solid third pairing defender for the Oilers in 2015-16, a contract year.

All in all, the 2015 NHL Draft was an absolute success for the Edmonton Oilers.

Adding Connor McDavid to their roster would have defined success in itself, however, Edmonton continued to acquire solid players, whether they be prospects or full time NHL players throughout the weekend.

In their drafting, the Oilers did extremely well to address the major needs of their team despite retaining low round picks, strictly securing defenseman and a goaltender, a few of which were clear steals later in the draft.

Further, through trades, Edmonton met the needs of their team in the present, adding a potential number one goaltender in Cam Talbot, a potential star defenseman in Griffin Reinhart, and a solid, physical defender in Eric Gryba, all without trading away any of their young core of star forwards.

Finally, it appears as though the Edmonton Oilers are moving in the right direction.