Many of the New York Islanders Nassau Coliseum fixtures, the blue and orange jerseys, the banners, organist Paul Cartier, will make the 25-mile trek to the Barclays Center.  One fixture left behind will be Sparky, the team mascot.

Sparky made his debut as the mascot for the New York Dragons of the Arena Football League back in 2001. Islanders owner Charles Wang owned the Dragons and wanted a cross promotion with the two teams. Sparky had a wardrobe. For Arena games he would pink, red, and black. For hockey he had the Isles orange and blue with a number zero jersey. His tail was the shape of a hockey stick. Sparky stayed with the Islanders after the Arena team ceased operations back in 2008. 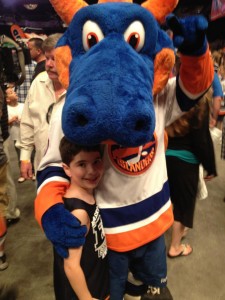 Kids, including my ten-year-old son loved Sparky. The adult fans not so much. A dragon mascot makes sense for a team called the Dragons. A team named the Islanders, not so much. Perhaps dragons flew around the Long Island Sound back in the day.

The Barclays Center has not had much luck in the Mascot department.  When the Nets moved from Newark to Brooklyn in 2012, the arena created “Brooklyknight”. The character was a public relations nightmare. He seemed to frighten youngsters with his severe metallic-colored mask. The character lasted two seasons.  Plus a dragon doesn’t seem to fit the Barclays Center marketing campaign.

Sparky does live on in EA Sports’s NHL16 and will make appearance in the Long Island community. Perhaps I can book Sparky for my son’s Bar Mitzvah.

The great #Isles Community Relations genius @AnnRina420 told me that Sparky will live on in appearances around LI. Fear not, Sparky fans.

Sparky can now drown his sorrows with the newly unemployed ice girls, as the Barclays Center decided on a co-ed ice team shoveling the ice.