This past weekend, the University of North Dakota Fighting Hawks were unceremoniously swept by the Denver Pioneers (4-6 L, 4-6 L).

Historically, UND doesn’t get swept very often. The Fighting Hawks entered Saturday’s game with a 24-1-1 record after a loss or tie. That record proved to be meaningless as UND was swept on the road for the first since November 4-5, 2011, when UND lost to the Minnesota Golden Gophers at Mariucci Arena.

No, matter how you look at it, this was not a good weekend for the Fighting Hawks. The boys in green and white failed to cash in on their opportunities and were sloppy in the defensive zone. UND lost quite a few of the 50/50 battles, too. With the loss, UND fell to 22-5-3 (.783). 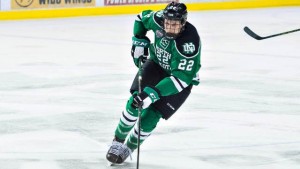 Even though the Fighting Hawks were swept this past weekend, there’s no reason to panic. UND entered the weekend tied for first in the National Collegiate Hockey Conference with St. Cloud State.

After being swept by the Pioneers, UND is still tied for first place in the NCHC.

Second, UND entered the weekend ranked third in the Pairwise Rankings. After being swept by the Pioneers, UND remains in that third spot.

While UND left the weekend with zero points, they’re still in charge of their own destiny. The UND coaching staff will make adjustments. You can bet that UND will be better this weekend when they play the Minnesota-Duluth Bulldogs in an important two-game conference series. 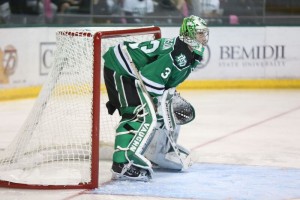 This past weekend, against the Denver Pioneers, Johnson was anything but stellar. Much like his Fighting Hawks teammates, Johnson’s positioning was off and he looked rattled. Here are Johnson’s numbers from this past weekend (0-2-0, 4.15 GAA and .852 save percentage).

If UND is going to make a run deep into the NCAA playoffs, Johnson needs to be better. After this past weekend, Johnson is second in GAA and save percentage (13-3-1, 1.61 GAA and .937 save percentage).

There’s No I in team

Hockey is a team game and there’s no I in team. You win as a team, and you lose as a team. There’s a lot of blame to go around. Good hockey teams recover from poor performances and make adjustments going forward. The 2015-16 UND hockey team hasn’t faced a lot of adversity, but every game gets tighter moving forward. The Fighting Hawks enter the stretch run having gone 4-3-1 (.562) in their last eight games. 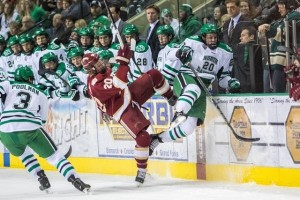 The Fighting Hawks d-core is one of the best in the nations. They entered the last weekend’s series against Denver as the second-ranked defense in the nation. After being swept this past weekend, UND is now ranked fifth in the nation for team defense. That’s a minor blip on the radar. Moving forward UND will need be better defensively if they want to go deep into the NCAA tournament.

After being swept this past weekend, UND is now ranked fifth in the nation for team defense. That’s a minor blip on the radar. Moving forward UND will need be better defensively if they want to go deep into the NCAA tournament.

Being swept by the Pioneers didn’t sit well with the players.

“Obviously not good,” UND captain Gage Ausmus told the media after Saturday’s loss. “It’s not acceptable for our program to lose two games in a row, no matter where we’re at or what team we play, so it doesn’t sit well with us. We got outplayed both nights. It’s something we need to learn from quick or it’s going to hurt us in the end.”

It will be interesting to see how the Fighting Hawks respond this week.