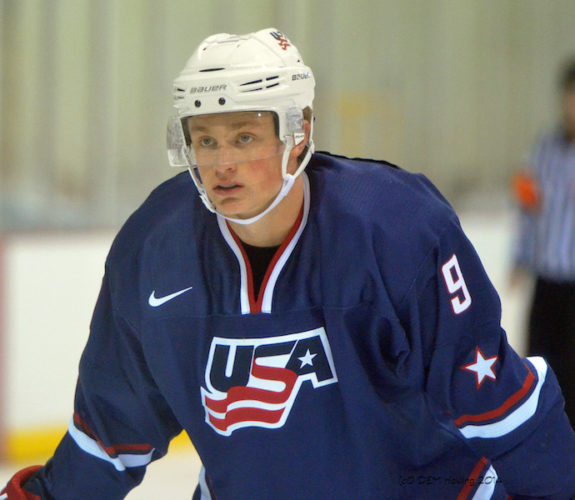 Team USA dominated Vezina Trophy candidate Pekka Rinne and the rest of the Finnish squad on route to a 5-1 victory in Ostrava, Czech Republic. The team, composed primarily of players with little to no NHL experience, outplayed second-ranked Finland from beginning to end. Captain Matt Hendricks finished the night with two goals and one assist to help his team earn three points in the tournament standings.

The Americans went to the penalty box early in the contest as University of Michigan’s Dylan Larkin committed an infraction just 3:48 into the first period. Luckily, his team was able to kill the penalty with relative ease and establish offensive zone time afterwards. Torey Krug would also make a trip to the sin bin at the 12:30 mark, but the opponents were unable to capitalize.

Finland had a couple of chances off the rush during the frame, but goaltender Connor Hellebuyck was strong in the crease and shut the shooters down. They exploited some bad changes for the United States but were ultimately stopped by the netminder.

With less than 30 seconds left in the period, Steve Moses received a pass on the rush while on the left wing. He made a power move to the goal and was able to lift a backhand shot over Rinne and into the net. This gave Team USA a 1-0 lead heading into the locker room. Shots were 14-11 for Finland after one period.

The Finnish team tied the game up at the 5:40 mark of the second period. A point shot by Jyrki Jokipakka was deflected in front of the net and beat a screened Hellebuyck. This goal temporarily shifted the momentum in the European club’s favor.

Finland kept bringing the pressure against the United States and almost gained a 2-1 lead when they hit the crossbar on a power play. They also had a a five-on-two rush but failed to generate a shot on goal off of it.

The freedom fighters would make the Finns pay for not scoring when they had the chance.

The speedy Dan Sexton worked himself into a partial break against Rinne and managed to get a shot on goal. The puck trickled behind the goaltender where Hendricks was able to bury it into the empty net. 2-1 USA.

The duo of Sexton and Hendricks would help America pot another tally just moments later. Sexton was able to rip a snap shot glove side while Hendrix was screening the 6′ 5″ netminder. Rinne was unable to pick up where the puck was going and the United States went up 3-1 on Finland with 5:13 left in the second.

Team USA refused to go on their heels despite holding a two-goal advantage. Just over six minutes into the third, a shot from Moses squeaked past Rinne and was inching towards the goal-line. The puck was bound to go in, but Nick Bonino gave it an extra swat for good measure. The underdog United States held a 4-1 lead on last year’s silver medalists.

With Hendricks in the box for goaltender interference, Finland’s head coach, Kari Jalonen, pulled Rinne for the extra attacker with 4:30 left, giving his team a six-on-four power play. Their efforts were futile though, as the American captain left the penalty box and was able to score an empty netter with 2:38 remaining. The Americans would not surrender a goal in the final moments and ultimately emerged victorious by a score of 5-1.