The THW Flames season preview will take a different direction than some of the other previews that are out there.

Here, let’s highlight 10 questions to monitor as the season progresses (This article includes 1 to 5 with a separate article featuring 6 through 10 to follow).

1. Do the Flames now possess best blueline core in the NHL? 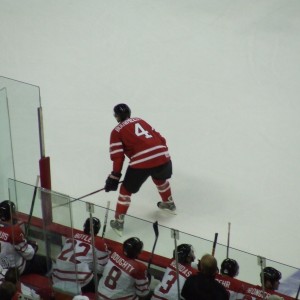 The Wings have perennial Norris candidate Nik Lidstrom and his co-conspirator Brian Rafalski to go with physical presence of Brad Stuart, the two-way and highlight reel hitting of Niklas Kronwall, and the emerging Jonathon Ericsson – the last overall pick of the draft a few years back. The Blackhawks possess an enviable top 4 with the underrated Duncan Keith, the ever-improving Brent Seabrook, the highly offensive aware Cam Barker and the enigmatic Brian Campbell, especially if the latter can rebound and be more consistent defensively. Niklas Hjalmarsson’s steady play augments this group nicely and the two-way physical presence of recent 1st rounder Dylan Olsen will be arriving on the scene in the next couple of seasons. The Predators’s blueline is the envy of many a NHL GM – Shea Weber, Ryan Suter and Dan Hamhuis with Cody Franson, Alexander Sulzer, Jonathon Blum, Ryan Ellis and Charles Olivier Roussel in the pipeline. The Kings will be talked amongst these groups in a few years featuring the likes of Drew Doughty, Jack Johnson, Thomas Hickey, Colten Teubert and Vyacheslav Voinov.

However, if one was had to choose a group to have as the last line of defense for a NHL team right now, the Flames fantastic group of blueliners would find the way to the top of many GM’s wish lists. They have a shiny new anchor in offseason acquisition Jay Bouwmeester. To say the silky smooth skating, highly hockey intelligent blueliner is shy and not very forthcoming is quite the understatement. He doesn’t reveal too much in interviews, but does all his talking on the ice. He almost effortlessly, but effectively logs close to 30 minutes a night. Although Dion Phaneuf had an obvious setback year last season, he is still a rare blend of being an elite talented defenseman with a menacing physical component to go with. Expect him to rebound after being reunited with his coach from juniors – Brent Sutter. Robyn Regehr is the steady, reliable, physical, stay-at-home d-man, who is also a very good skater. The currently injured (after a shotblock) Corey Sarich is considered by most to be the fourth d-man in this group. Rebounding from a less than stellar first year with the Flames, Sarich was his steady, physical and reliable self last season. I think Mark Giordano will eclipse Sarich this season as a top 4 d-man. He is quick, agile and displays very good puck poise. Adam Pardy rounds out the top 6. Pardy possesses excellent size, a willingness to learn, and a passion for the game. Stefan Kronwall is the current 7th blueliner for the squad. He has good size and has showed well with Sarich in the infirmary to start the season.  With Tim Erixon, Matt Pelech, Keith Aulie, John Negrin and T.J. Brodie in the system, the blueline is in great shape well into the future.

2. Will the three year inflating goals against average and save percentage trend continue for Miikka Kiprusoff? 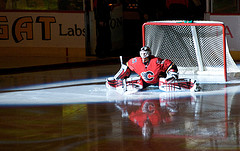 The 2005-06 Vezina winner has outstanding reflexes with incredible agility leading to a beautiful butterfly style of netminding. Without a doubt, the ever-increasing stats (GAA and save %-age) since his Vezina year is troubling. There is no doubt he has to be better; cutting back on the soft goals and stepping up to the plate and stealing some games for the Flames. The less porous defense, as noted above, a Flames team fully up to speed with Brent Sutter’s “system”, and a slightly less workload should all add up to Vezina-candidate type year for Kipper.

Which version of Phaneuf will step into the limelight this season for the Flames? The runner-up Norris Trophy candidate the year before last, or the enigmatic, lackluster, defensively inconsistent version that was too often on display last season. As mentioned in question #1, with Brent Sutter, Phaneuf’s coach in the WHL with the Red Deer Rebels, now at the helm, “Neon” Dion should be in a position to regain his superb form and once again be mentioned amongst the game’s elite blueliners.  Robyn Regehr has been openly critical of axed Coach Mike Keenan’s lack of a true system, with players seemingly left to roam at will. This won’t be the case now that Brent Sutter is in charge. Coach Sutter is a stickler for precise positioning and playing within the outlined system. His attention detail is second to none, and his presence will undoubtedly be a positive for Phaneuf and the Flames.

4. Who will be the Flames #1 left winger, playing with Jarome Iginla and Olli Jokinen?

The two superstar forwards, Olli and Iggy, seemed to have chemistry issues last season after Jokinen was obtained at the trade deadline. It never did seem to click no matter who the Flames penciled in on the left wing with them. Rene Bourque, Curtis Glencross, Mikael Backlund and Nigel Dawes have all been mentioned in the offseason and preseason as being the benefactors of the highly sought after position. The surprising emerging candidate to start the season, however, is none other than David Moss. The 2001 220th overall pick has flipped wings from the right to the left side. Moss said yesterday in an interview he’d play any position if it meant being on the ice with those two. The big winger had a noticeable jump in his skating stride last season and he was rewarded with a breakout 20-goal campaign. While Iginla and Jokinen have struggled out of the gate,  Moss has the hot hand to start the season with 2 goals in 2 games. If Iggy and Olli continue to struggle, though, it will be interesting to monitor how long Sutter will go before having to juggle the lines. The only problem being that the other forward lines have exhibited good chemistry already and he might be hesitant to mess with that.

5. Is Curtis McElhinney the answer as the backup goaltender?

The number one goalie is obviously set in stone with Kipper patrolling between the pipes. Last season, then Coach Keenan showed little faith in backup netminder McElhinney. The resultant was an overworked Kiprusoff. Curtis appeared in just 14 games and his first NHL win didn’t come until the meaningless last game of the season. He is an athletic and agile goalie with decent size. Teammates say he is fantastic in practice, but has yet to translate that to success in NHL regulation games on a consistent basis. Should he falter, given that the Flames vow not to overwork Kipper this season, former 1st rounder Leland Irving is waiting in the wings. Irving finished 4th in the AHL last season with a 2.23 GAA and was spectacular down the stretch on a less than stellar Quad City squad. He has had some injury issues but is now on tract to develop into the spectacular goalie he was projected to be.

As always, feel free to comment below or email me at: