Just like any other national event, the Frozen Four draws in a big audience. Although its viewership ratings haven’t been all that consistent over time, the exposure it provides to its players has indeed skyrocketed. A lot of this extra exposure has to do with the NHL’s changing needs. 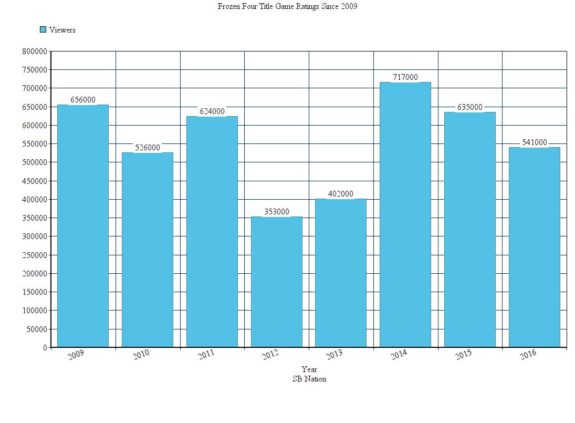 When teams make it to the Frozen Four, they’re going to be seen by NHL scouts. We know this because if we take a look back at the draft results since the 2009 NHL Entry Draft, there’s been a total of 41 NCAA-developed players drafted in their second or third draft-eligible years. Thirteen of these players (or 32 percent) played in the Frozen Four of the same draft year. What’s more interesting about this is that last year’s tournament saw the biggest jump in re-entry draft picks. Six out of nine players played in the 2016 Frozen Four:

Of these 41 NCAA-developed, re-entry draft picks, the largest percentage have been defensemen (41 percent), while the next largest segment belongs to centermen (29 percent). In this year’s Frozen Four, there’s three defensemen who’re still draft eligible, as well as one centreman.

The odds of at least one of these players getting drafted in the 2017 Draft are pretty good. That being said, there’s also been a pretty noticeable rise in the number of NCAA-developed defensemen signing with NHL teams as free agents afterward. 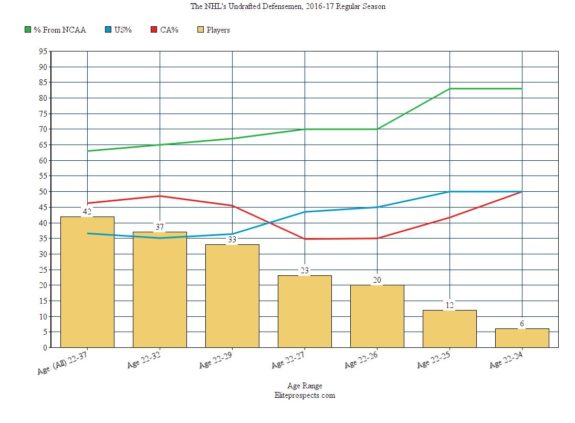 In the chart above, I’ve listed the number of NCAA-developed defensemen who signed with a team as a free agent and who’ve played in at least one NHL game in the 2016-17 season. We can clearly see there’s a rise in the percentage of these defensemen as they get younger.

The same cannot be said for forwards though. 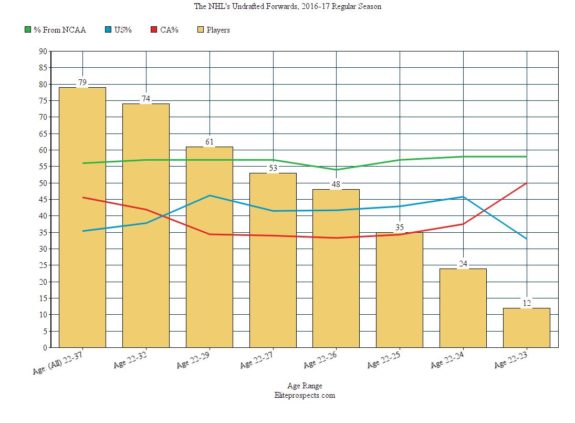 Although the number of undrafted forwards who developed in the NCAA and signed with an NHL team as a free agent is slightly higher now than it was in 2009, they’re not rising as much or as quickly as defensemen are. In fact, the pace in which these two positions are signing as free agents isn’t even close. The reason for this may have something to do with their abilities to produce offensively at the NHL-level.

Let me show you.

In the chart below, you’ll see the number of undrafted, NCAA-developed defensemen and forwards playing the NHL for the 2016-17 season: 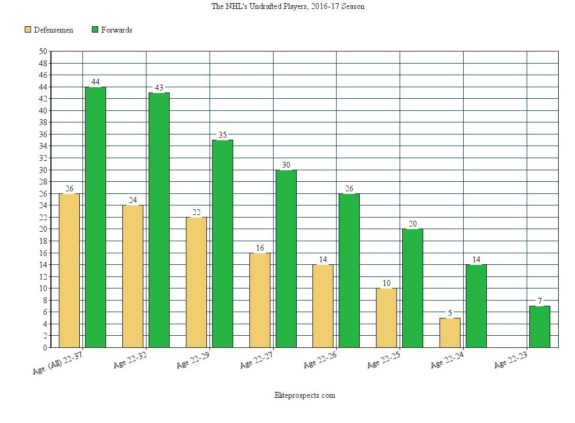 When it comes to NHL games played though, defensemen seem to have the upper-hand over time.

As you can see, once these defensemen hit the age of 25-years-old, they’re playing in more NHL games throughout the remainder of their career and there’s more of them still playing too.

In the next chart, you’ll also notice these forwards are scoring more goals but of course, that was expected.

Equally as expected is their prime point-production years, which occur between the ages of 23 and 25-years-old. However, when it comes to these defensemen, they seem to maintain a consistent level of scoring throughout their NHL careers after the age of 25. Although it takes defensemen a little bit longer to get into the groove of scoring, once they do, they become much more consistent at it.

Another interesting observation is the assists these two groups of players register. In the chart below, you’ll see that defensemen in the NHL right now, who were not drafted but rather who signed as free agents and developed in the NCAA, are getting more assists than forwards with the same developmental background.

Again, these defensemen are late bloomers when compared to forwards. However, over the course of their NHL careers, there’s a lot more defensemen getting a lot more assists. In the long run, defensemen who take this route to the NHL are considered to be long-term investments. Forwards under the same conditions are better suited for short-term usage because they produce both goals and assists faster. Meaning, they’re more likely to impact the team sooner but not later.

Finally, when it comes to overall point production, these defensemen are contributing more offensively over time, than these forwards.

These findings explain why more NCAA-developed defensemen are finding ways to the NHL now than compared to only a few years ago. When it comes to NHL teams making long-term roster plans, NCAA-developed defensemen, both drafted and undrafted are smarter investments, even though they don’t make impactful offensive contributions until the age of 25, on average.

The Frozen Four title game is today at 8 pm at the United Center in Chicago, IL and even though there is only a few draft eligible players available for the 2017 Draft, there’s still a whole slew of available free agents.

The Minnesota Duluth Bulldogs will play against the Denver Pioneers in what’s expected to be one of the NCAA’s most entertaining games of the year. That being said, there’s still a number of key free agent defensemen to look out for. Depending on how they play tonight, they might just land themselves an opportunity to try-out for the NHL.

First, we have Brenden Kotyk, one of the alternate captains for the Minnesota Duluth Bulldogs. The 6-foot-6, 229-pound Canadian is a first-pairing defenseman who started with small beginnings. At the age of 21, Kotyk started his NCAA playing career for the College of St. Scholastica, which plays hockey at the Division III level in the NCAA. This is where he caught the attention of coaches, after leading all NCHA rookie blueliners in scoring. This is exactly the type of defensemen to thrive in the NCAA division 1 league and it’s why he’s the first-pairing blueliner at Minnesota – Duluth.

“…I just don’t think we have to quit what we’re doing right now,” Kotyk told reporters in a press conference on Friday at the United Centre. “We’ve just got to keep playing defense on those guys especially and be real hard on them. I think that will be key to us.”

Being hard on the Denver Pioneers shouldn’t be a problem for Kotyk or his blue-lining partner. Neal Pionk is 6-feet tall, weighs 190-pounds and may have a little more finesse to his checking regime than Kotyk does. Pionk’s point production has nearly doubled this year, both with his scoring and assists and that makes him and Kotyk an offensive force at the blue line that should never be underestimated.

“I think run and gun is dangerous to play with a team like Denver,” Raskob said in the press conference on Friday. “You see they score a lot of goals. I wouldn’t say, necessarily play a stay-at-home defensive game by any means. We’re a team that can get up and down the ice too. The games we played in Denver were two, very good games.”

These are three defensemen who play for Scott Sandelin, head coach of the University of Minnesota – Duluth Bulldogs. It’s also a possibility for any one of them to get signed after the season finishes… which is tonight. The role of these particular players is especially important in this evening’s game, as Denver University will not make their lives easy at all.

The countdown to the final championship game is on and tonight could have a few, ever-lasting effects on the defensemen who play.  From making great plays to scoring goals to winning the title to signing contracts, the Frozen Four has become on of the most influential and entertaining tournaments in college hockey.