Early in the regular season, with the New York Rangers still struggling somewhat to find their game, they had the misfortune of playing a hot, potent Tampa Bay Lightning team three times in a two-week span. After the Lightning won all three contests by a combined score of 15-7, Rangers fans had to be happy that the earliest time they would have to see that team again would be in a potential Eastern Conference Finals (I still refuse to use the singular “Final”) matchup.

Sure enough, that is how things shook out. The Rangers, however, are a different team now, and the playoffs are a different animal. New York’s 2-1 victory in Game 1 underscored both of these points.

After that however, New York completely turned things around, going an astonishing 42-13-3 over the rest of the season to capture the Presidents’ Trophy. So when Derek Stepan’s Game 7 overtime goal against Washington in Round 2 set up a Rangers-Lightning Eastern Conference Finals series, it was hard to know what to expect. The Lightning had taken it to the Rangers in the regular season, but that was ages ago.

One would even think that the Rangers’ speed game would work better against the Lightning, a team that likes to play a similarly fast pace and whose style is not as predicated on shutting down speed through the neutral zone as, say, that of the Washington Capitals.

From the outset of Game 1, the Rangers looked very comfortable playing their game against Tampa Ba, especially compared to their regular season matchups. If not for Bishop continuing to stymie the Rangers early on, the home team could have run away with the contest. Instead, the score was 0-0 until Stepan delivered a clutch goal once again for the Blueshirts late in the second period.

While the Lightning tied the game in the third period on Ondrej Palat’s power play goal — the first power play goal the Rangers had given up since Game 1 against Washington — the Rangers continued to show their resiliency, ultimately taking the lead back on a late goal that went in off Dominic Moore’s leg for yet another 2-1 playoff victory.

Perhaps the most surprising aspect Game 1 — even more so than the Rangers finally winning against the Lightning and snapping Bishop’s career unbeaten streak against them — was how New York had a clear edge in puck possession. During the regular season, the Lightning had the fourth-best 5-on-5 Corsi-for percentage (percentage of total shot attempts for them vs. their opponents) in the NHL. This, combined with their finishing skill upfront, helped them lead the league in goals scored.

In Saturday’s Game 1 however, the Rangers also flipped the script in the possession department, out-attempting the Lightning 61-50 in total, and 54-37 at 5-on-5 (chart below courtesy of war-on-ice.com) 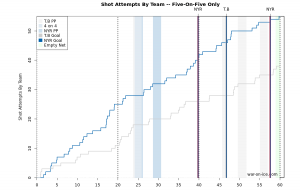 If the Rangers continue to dominate possession this way, they’ll probably finish on a few more of their chances, and the Lightning will be in trouble. That said, Tampa Bay did not finish as one of the league’s top possession teams and with a 50-24-8 record by accident, so it’s probably safe to assume that we have yet to see their best. We saw it in their November and December victories against the Rangers, but it was New York who reversed that trend and several others in Game 1.