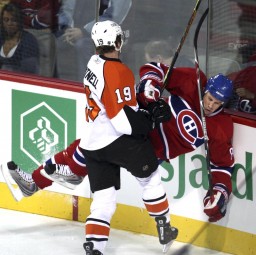 The arguments over the officiating pre-lockout and post-lockout by now have been played to death. Whatever side you may be on there is one point that brings every fan together; the number of calls being made in some of these games is unbelievable. The Flyers are perhaps the hardest hit by this recent trend having been awarded a whopping 61 less powerplays than the teams they have faced off against. Say what you want about their penalty kill and league leading 13 short handed goals, but there is one thing that has to be taken into consideration. When you are playing down a man more often then anyone else, if you’re a good team you will have your opportunities to score shorthanded. You will also have your PK numbers inflated just by the sheer volume of times you are in such a situation. It’s not fun for player or fan to see their team struggle so often with weak calls made in every game.

And this is not to say that the Flyers are the only team hit by this. The league officiating has been making mistakes since the lockout. All teams have weak calls not go in their favor. It happens. Human error is undeniable and unable to be take out of the equation. Still when the numbers are so unbelievably out of balance you can’t help but take a second look just to figure out just what exactly you’re looking at.

A recent quote by Flyer winger Scott Hartnell boldly proclaims what many Philadelphians have been thinking for a while. “I think it has a lot to do with the crest we wear on our jerseys, with all our history and stuff like that, but we have to do a better job individually to keep our sticks where they belong.” Hartnell just so happens to lead the team in minor penalties. His claims are very bold.

Mike Richards and others keep the focus more on their own play claiming that it is just something that they need to work on. It has become such an issue that Coach John Stevens has said the team will be doing technical work this week during practice in an attempt to fix the problem. It’s gotten to the point that whatever you want to call it, poor officiating, the Flyers getting in their own way, or a vendetta held by the league against one of its most storied franchises, it is still costing the Flyers points in the standings in not only a tight race for the Atlantic Division but also for the Eastern playoff picture.

They have time to gather themselves now after a pounding in Saint Louis on Saturday. The road doesn’t get any easier for them this week though with the league leading Boston Bruins appearing twice as the only two scheduled games for the week; one in Philadelphia on Wednesday and the other in Boston on Saturday.

Right now the Flyers are battling some of the best competition that the NHL can throw at them. It doesn’t help matters when they have to battle the officials and possibly even themselves as the push for the postseason heats up. The amount of penalties taken by the Flyers is inexcusable no matter what the situation. The Flyers feel that they must prove to the refs that they are not the Broad Street Bullies they are so often claimed to be. This Philadelphia team may have the fight in them of the old Flyers but long gone are the days when Dave Schultz patroled these frozen waters. The team is a smaller version of its former self, but that doesn’t change their mentality. The team will come out and hit you no matter what. The goal is only to keep it under control. More penalties is the last thing the team needs.

On a brighter note the Flyers powerplay is tied for 6th in the league in power play goals even with far fewer opportunities than the league average. That is good enough to keep them in 2nd place in power play percentage behind only the reigning champions from Detroit. With a healthy roster and a little less time in the box there is no reason why this team can’t be the scariest team in the league. While the Flyers work on technical stuff in practice all eyes will still be on Danny Briere and Paul Holmgren as the point per game center heals his groin and the general manager prepares for the trade deadline.