Something that quacks, waddles and eats bugs for breakfast isn’t typically considered more physical than a ferocious animal that devours said creature for its breakfast.  And yet, on Friday night at the Honda Center in Anaheim, California, that’s exactly how it was.

The Anaheim Ducks, on the strength of 31 saves by Jonas Hiller and a bang-bang scoring play by a trio of unlikely participants, defeated the San Jose Sharks 1-0.  “A lot of missed opportunities tonight”, lamented San Jose forward Ryan Clowe.

Heading into the game, each team had taken decidedly different paths toward victory in their previous encounters.  Anaheim had defeated the New York Rangers 2-1 in the shootout six days earlier in Stockholm, Sweden, before migrating back to Anaheim.  The Sharks, on the other hand, stayed local, defeating the Phoenix Coyotes in a dominating performance last Saturday, 6-3.  Both teams were rested, perhaps even rusty by the time the puck dropped.

At 13:59 of the first period, the Ducks’ checking line worked a brilliant play to score the game’s only goal.  Maxime Macenauer won the draw to the right of Jonas Hiller and chipped the puck out of his zone to Brandon McMillan, who skated in and sent it deep into the corner.  George Parros and his mustache crashed the boards and did his best Sidney Crosby imitation, passing it in front of the Sharks’ net to the trailing Macenauer.   The gritty fourth line center reached out with his stick and redirected the puck past Sharks’ goalie Thomas Greiss for the 1-0 Anaheim lead.

“I got lucky,” Macenauer said.  “It was a pretty good pass from Georgie down there.  I only had to tip the puck in the net.  Pretty easy for me.”

Modesty notwithstanding, nothing was easy in the fast-paced defensive struggle.  Earlier in the game, San Jose’s Joe Pavelski executed a highlight reel pull-and-drag maneuver that 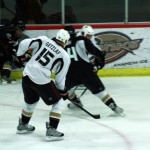 utterly faked out defenseman Toni Lydman, leading to a rifle shot on net that was snared by Hiller.  At the 12:38 mark of the 1st period, Ryan Getzlaf’s pass was one-timed by Teemu Selanne from the slot, subsequently stoned by Greiss.  Early in the second, Sheldon Brookbank’s wrister almost handcuffed Greiss as he made the save.  Less than two minutes later, a Getzlaf forecheck resulted in a tic-tac-toe play between Getzlaf, Corey Perry and Bobby Ryan and a blistering shot that was stopped by the San Jose netminder.  In the third period, a Joe Thornton turnover created an Anaheim scoring chance as Selanne blasted the puck on net from 12 feet out, saved by Greiss.  Late in the period and while on the power play, Thornton and Jason Demers executed a give-and-go that resulted in a point blank slap shot by Demers, turned aside by Hiller.  When the horn finally sounded, Anaheim skated away victorious, Jonas Hiller recording his 12th career shutout.

The physicality differential between the two clubs was evident in the statistics.  The Ducks outhit the Sharks 24 to 19, blocked nine more shots, and generated five penalties to San Jose’s three.  The Sharks ended up winning the shot battle, 31-23, but in the end, Hiller was a shade better than Greiss when it counted the most.

his performance and whether or not this was a “statement game” following his vertigo-shortened 2010-11 season, Hiller said, “I want to make a statement every night no matter what happened last year.”  San Jose coach Todd McLellan was more effusive:  “”He played an exceptional game tonight.  The good news for us is I thought our goalie matched it.  He played a very sharp game tonight.”

Analyzing the loss, Sharks’ forward Ryan Clowe said, “We didn’t have the legs like we did against Phoenix.  Tonight we were kind of fading off and turning our backs to the puck.  Kind of like ‘hope’ plays, hoping the puck will get to you instead of knowing you actually have to work.”

In a bit of bad luck for the Ducks, forward Jason Blake suffered a severe cut to his left forearm from the right skate of San Jose defensemen Brent Burns after he went down to the ice in a tangle of bodies.  He was taken to UCI Medical Center for sutures, with a progress report impending.

The Sharks play St. Louis Saturday night at the HP Pavilion, and the Ducks entertain the Blues on Sunday.  Monday night, the two teams square off against one another once again, this time in San Jose.  The Sharks hope to remind the Ducks the proper relationship between predator and prey the next time out.