It’s the end of an era, as last night’s game between the Kings and Blackhawks was the final national broadcast of the NHL on TSN. [Awful Announcing]

A few days ago, Corey Crawford was finally getting the credit he deserved. That feels so long ago. [Sports World News]

Chicago has more problems than just its goals against average. [Los Angeles Times] 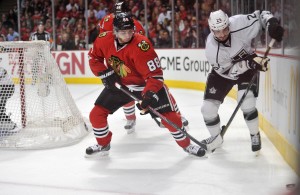 Will the Hawks stars come to life in time to stage a comeback? [National Post]

Martin St. Louis had enough time to make himself a sandwich before picking his spot on that overtime goal. [Puck Daddy]

Do the Habs have enough left in the tank to comeback against the Rangers? [Montreal Gazette]

Lots of issues for Vancouver to tackle this offseason. [The Province]

Losing Ryan Kesler to the Ducks may be one of them. [Edmonton Journal]

Russia may not have medaled at the Sochi Olympics, but at least they won an inferior tournament to make up for it. [NHL.com]

Is Alex Hemsky a fit in Washington? [Vavel]

The Capitals have their man, hiring Barry Trotz as their new head coach. A defense-first guy working with Alex Ovechkin. This should go well. [CBC]

What are the odds Dan Bylsma stays behind the bench in Pittsburgh? [Post Gazette]

The Hurricanes are still in the market for a new head coach. [News Observer]

And finally, congrats to the Edmonton Oil Kings, your 2014 Memorial Cup Champions. [The Record]