Filed under news that isn’t really news, Sidney Crosby will wear the captain’s C for team Canada at the Olympics. Jonathan Toews and Shea Weber will serve as alternates. [Macleans]

Crosby and teammate Fleury speak about the distinction. [Trib Live]

The Flyers have given goalie Steve Mason a contract extension. [Broad Street Hockey]

Injuries in the NHL cost a lot of money. [Globe and Mail]

The fight that included some hockey on Saturday night between the Flames and Canucks drew some criticism from a baseball guy. [CBC]

John Tortorella has an in-person hearing regarding his actions outside the Calgary dressing room. [New York Post]

Jamie Benn elbowed Matt Cooke in the head but no one seems to care because it’s Matt Cooke. [SB Nation] 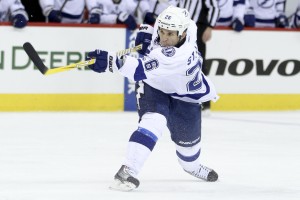 It’s not everyday you score all four goals and your team still loses the game. [Bolts by the Bay]

Perhaps an invite to the Olympics was all Rick Nash needed to find his game again. [Rant Sports]

And lastly, the Blackhawks prevailed in a re-match of last season’s Stanley Cup final. [Chicago Tribune]