Roberto Luongo literally can’t shake this goalie controversy to save his life. [The Province]

Granted, there’s usually a lot going on behind the scenes that the casual observer never gets to see. But Don Cherry’s assessment of the lousy treatment the Canucks have given Luongo is pretty accurate. [CBC Video]

The Canucks have bigger fish to fry, however, mired in a scoring slump and losing Daniel Sedin to injury. [Globe and Mail]

Reportedly the Pittsburgh Penguins are going hard after Ryan Kesler. Who may or may not have asked for a trade. [Digital Journal]

Is acquiring Kesler the right move for the Penguins, who aren’t exactly looking like strong Cup contenders? [Pensburgh]

As is often the case, a big trade happened before the actual trade deadline. [St. Louis Game Time]

Are the Blues now a Stanley Cup favorite after trading for Ryan Miller? [Rant Sports]

What’s next for the Buffalo Sabres? [The Star Phoenix] 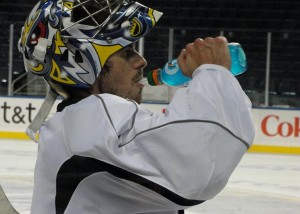 A lot of the attention now switches to Thomas Vanek and where he may end up. [Long Island News Day]

The Carolina Hurricanes might trade Cam Ward. Or any of their goalies. [Cardiac Cane]

And finally, a collection of trade deadline stats and what they mean. [TSN]