It was a light week back from the Olympic break for the Calgary Flames, who played only two games as the NHL season resumed.
Although Reto Berra did not make it all the way to the gold medal game, he did not start for the Flames in their first game against the L.A. Kings on Thursday night. And with Karri Ramo still out with a knee injury for an undisclosed amount of time, it was up to another Finn to fill the net for Calgary. In his very first NHL start, Joni Ortio’s cool, calm demeanor reflected that of his predecessor, Miikka Kiprusoff.
Their personal statistics almost identical (6’1″ and 185 lbs and both hailing from the town of Turku, Finland), the pressure was immediately on Ortio. And though he may not have gotten the result he wanted, Ortio’s NHL debut went relatively well, making 22 saves and remaining collected despite allowing two goals. Not bad considering that at 22, Ortio is the youngest netminder to start for the club since 2000.
The Kings’ first goal came just three minutes into the opening frame, courtesy of a Kris Russell turnover and a resulting backhander by Dustin Brown.
If the early goal rattled Ortio, it didn’t show. He was quick to shake it off and played solidly for the next 54 minutes. It was only with three minutes left in the game that Ortio allowed the second Kings goal of the night, when, after making an initial save on Dwight King’s shot, failed to stop the rebound.
In front of him, the rest of the players dressed in red worked hard and played a fast-paced game, particularly dominating in the second period and keeping the Kings out of their own offensive zone for the majority of the game. However, the difference-maker in the game and the reason the Flames were dealt their first loss in the Saddledome since January 16th was Jonathan Quick. Playing to his Olympic caliber, Quick was flawless, stopping all 25 shots he faced and earning his fourth shutout of the season as the Kings blanked the Flames 2-0.

The Battle of Alberta will always be an epic battle, even if the battle is seemingly between two teams fighting to be dead last in the standings.
And that’s where the Calgary Flames and Edmonton Oilers are currently at, with the Flames at 14 and the Oilers at 15 in the Western conference.
The scoreboard favoured the Flames early in Saturday night’s game when Sean Monahan nabbed his 17th goal of the season, at 10:15 of the first period.
Calgary’s lead quickly soured the mood of the fans in the arena, but the intensity of game was elevated with a scary incident involving Luke Gazdic and Kevin Westgarth. The Flames forward was exchanging blows with Gazdic (who is already known for an enforcer role despite his young age and short time playing in the NHL) when a particularly hard hit sent him down. Westgarth remained down on the ice for several minutes before having to be helped to his feet and taken to the locker room. The team later released a statement saying that Westgarth is now in the NHL’s concussion protocol system. 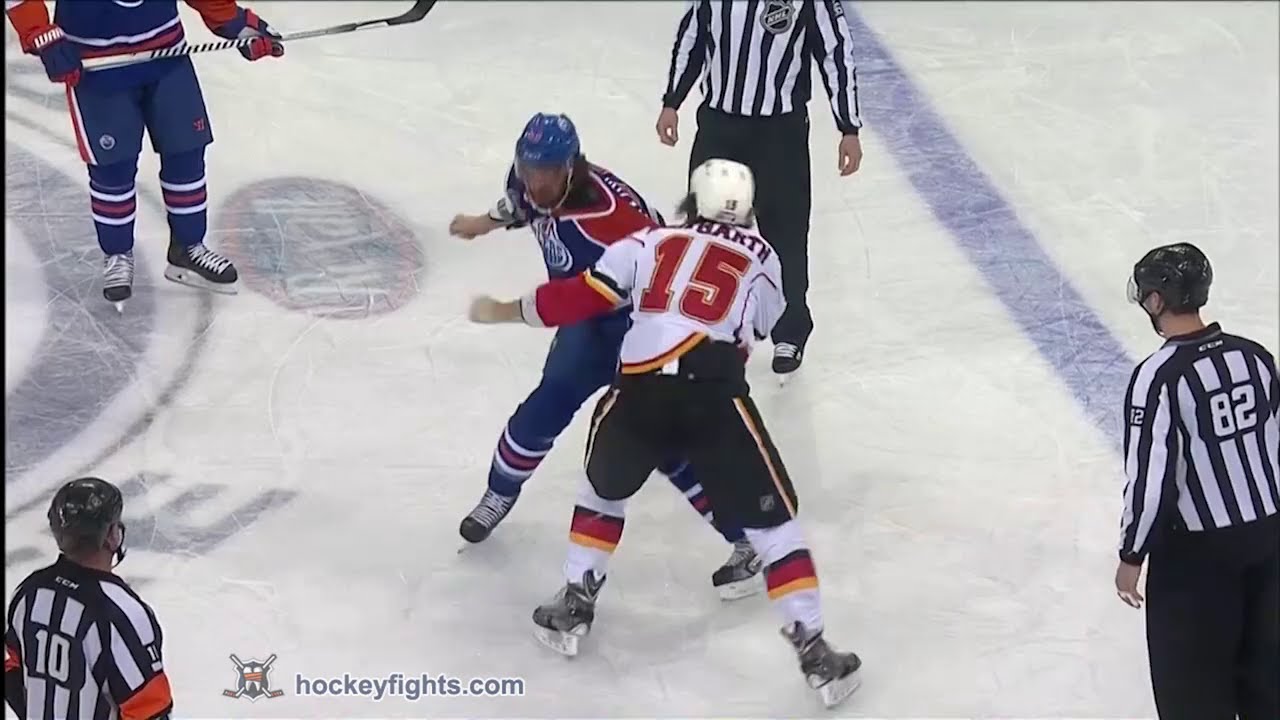 Following the incident, the Flames battled hard and effectively shut down the Oilers’ top line for most of the game, but a snap shot from David Perron managed to elude Reto Berra, and with a little over 10 minutes left in the final period, the two teams found themselves in a 1-1 tie.
The extra frame didn’t last long, however, and once again, the Flames’ remarkable rookie struck. Only a minute into overtime, Monahan took a feed from Paul Byron and netted a neat little wrister past Ilya Bryzgalov. With his second of the night and his 18th of the season, Monahan  single-handedly awarded the Flames the all-important two points and became the youngest player in franchise history to score an overtime goal.
With 26 points to his name, only one other rookie is causing a bigger sensation in the NHL than Monahan, and that is Nathan Mackinnon (not surprisingly). But Monahan’s impact on his rebuilding team is proving to be a more significant one than Mackinnon’s. So much so that coach Bob Hartley named him as one of only two “untouchables” on the roster as the trade deadline approaches. The other untouchable? Captain Mark Giordano.

The Flames head to Minnesota to face the Wild on Monday, and wrap up the 20th week of the season with back-to-back home games against the Ottawa Senators and the New York Islanders.

Stay tuned for Week Twenty of The Flames Files and follow the Calgary Flames’ progress in the 2013-2014 season.