In last year’s NHL Entry Draft, the Carolina Hurricanes selected Andrei Svechnikov as the second-overall pick. The notoriety that accompanies being the second-overall pick is significant, and along with notoriety has come increasing scrutiny. As the season enters the home stretch, would the Hurricanes have still wanted Svechnikov at number two overall had they seen his first season?

Svechnikov Was a Draft Darling

If you can recall the hype going into last year’s NHL Entry Draft, Svechnikov was talked about widely as a worthy top-five overall pick. Some scouts even had him at number one overall. He definitely had the hype train rolling pretty good. For example, in The Hockey Writers’ Draft Prospect Profile last April, Andrew Forbes quoted Steve Kournianos/The Draft Analyst as saying, “His vision and hands already are at an elite level. Additionally, his upper-body strength is often underestimated, and opponents losing puck battles via a shove become commonplace when Svechnikov is involved in a tight-checking affair. You can use Svechnikov in any situation, and he is a threat to score while shorthanded.”

Kournianos echoed a theme that seemed to be prominent among scouts about Svechnikov’s size as well as speed and vision. While he has not emerged thus far as the offensive juggernaut he was touted to be, he has proven beyond a doubt that he belongs playing in the NHL. Even at his young age – he will be 19 in a week or so – “Svech,” as he is called by his teammates, is not out of place.

Through 68 games, Svechnikov has put up numbers some veterans would love to see on their stat line. He has 15 goals and 14 assists for a total of 29 points. At Hockey-Reference, he is shown to be averaging 14:26 of ice-time per game. Compared with another phenom for the Hurricanes in the recent past, Sebastian Aho, who averaged 16:47 per game his rookie season, Svechnikov is not too far off in playing time as a rookie.

What about the physical factor that scouts loved? Through 68 games, Svechnikov is fifth among the Hurricanes forwards in total hits at 102. He is averaging 1.5 hits per game, not too shabby for a rookie forward. The book on Svechnikov said that his weakness was on the defensive side of the game.

To his credit, Hurricanes head coach Rod Brind’Amour has parked “Svech” on the third line, seemingly to give him the defensive experience he needs. With a top line of Aho and Teuvo Teräväinen, Svechnikov’s scoring prowess is not needed there. The result is that he has not only put up decent rookie numbers, but is learning to improve his defensive game also playing a lot with Jordan Martinook and Brock McGinn. 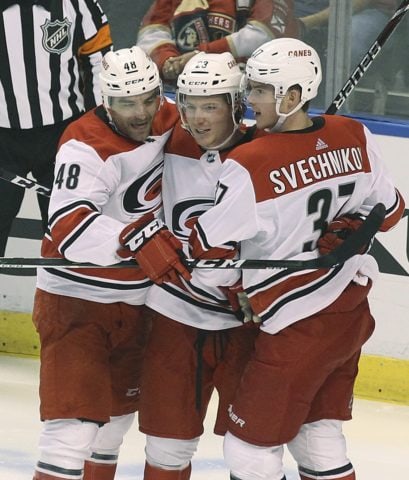 Of course, coaches do make changes, and against the Nashville Predators on Saturday night, Brind’Amour had Svechnikov on the second line with Jordan Staal and Teräväinen.

During the Hurricanes’ recent game at home against the St. Louis Blues, I paid particular attention to Svechnikov and his line. Against the Blues, they were rarely in the offensive zone. Time after time they would be on the ice and barely cross the center line. They played well, but there was little, if any, offense. It made one of my media colleagues question, “Is Roddy hiding him on the third line? Is he trying to improve the defensive part of his game?”

Interestingly enough, the whole conversation that night started with one of the Blues’ media to whom I was saying, “He’s only 18. Cut him some slack.” We were talking about what appeared to be a Svechnikov first season lacking the flash that the hype train promised before he was drafted second overall. Another member of the media made this observation about Svechnikov: “He rarely has a superstar in the making moment.”

I watched for that moment against the Blues and had to admit that a moment like that did not happen. But, that really is not the point in my opinion. I believe that the Hurricanes were absolutely correct to select Svechnikov second overall. I see a soon-to-be 19-year-old playing nearly a fourth of entire games night in and night out. I see a young player who is not afraid to hit and who is learning what it means to be a two-way player in the NHL.

Nobody expected “Svech” to knock Aho or Teräväinen out of their spots in his first season. But, unlike some, I do see a superstar in the making. The biggest reason I see that is his attitude. He’s not complaining and griping about where he plays. He’s thankful to be playing and is willing to learn. It would not surprise me at all to see Svechnikov blow up in season two or three just like Aho is doing. To me, he’s that good. 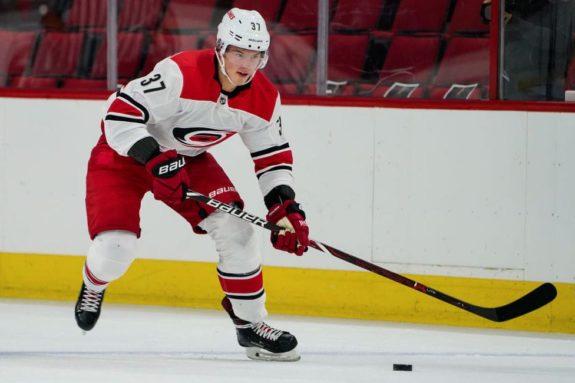 RALEIGH, NC – JUNE 30: Carolina Hurricanes Andrei Svechnikov (37) skates the puck up the ice during the Canes Prospect Game at the PNC Arena in Raleigh, NC on June 30, 2018. (Photo by Greg Thompson/Icon Sportswire via Getty Images)

Oliver Thompson wrote about Svechnikov about a month ago at Cardiac Cane. He wrote, “Svech is having a very good first year in the NHL. He’s not playing alongside a Brock Boeser (as Elias Pettersson is), or a Mark Stone (as Brady Tkachuk is). He’s driving the play himself, improving his teammates, and learning what it takes to compete at the top level from an early age, from one of the very best…Svech has handled the jump from the OHL with considerable ease, and we should all be excited about what the future holds for him.”

At number two overall, the Hurricanes selected Svechnikov. A great selection and one that is very likely to pay huge dividends for the team for seasons to come.