Sidney Crosby missed 61 regular season games due to a concussion that was believed to be suffered in the 2011 Winter Classic against the Washington Capitals. Crosby was blind-sided by Capitals’ forward David Steckel. In the following contest, Crosby took a check from behind from Tampa Bay Lightning defenseman, Victor Hedman.

We all remember this night as the comeback for Sidney Crosby. November 21st, 2011 was the most anticipated hockey game in Pittsburgh Penguins’ history since the return of Mario Lemieux out of retirement. Crosby went on to record two goals and a pair of assists in a 5-0 drubbing of the New York Islanders.

Crosby participated in the final 22 games of that season. He was the highest point-getter in the league for the remainder of the campaign. He racked up 37 points, but Crosby was mostly picking up assists. Discounting his return against the Islanders, Crosby scored six goals in his final 21 games.

Due to the lockout, Crosby had plenty of time to heal his wounds leading up to the start of last season. Again Crosby was collecting a ton of points but the majority were assists. Crosby was not as much of a goal-scoring threat as he was a set-up man. 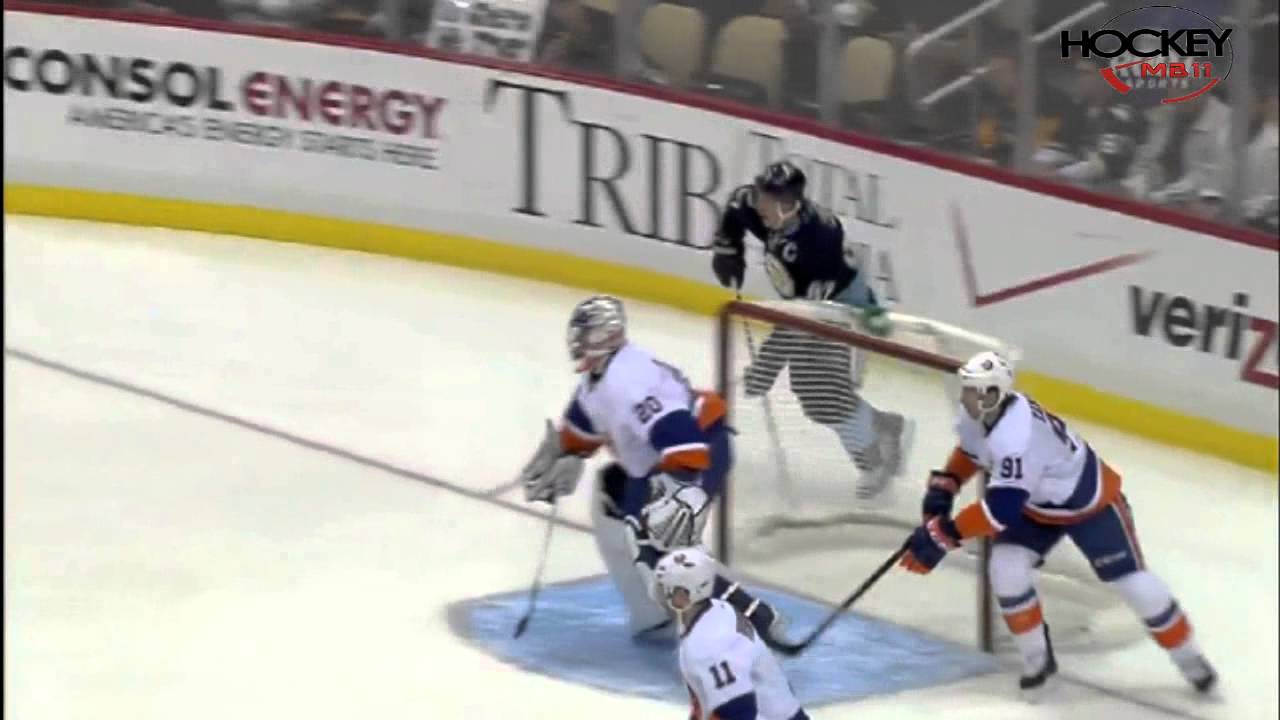 Crosby was set back once again by this unfortunate incident last year. He missed the remainder of the regular season with a broken jaw. He returned for the 2012-2013 playoffs and performed at a high level. However, Crosby went his last five post-season games without scoring a goal as the Pens were swept in four games by the Boston Bruins in the Eastern Conference Finals.

I know Crosby was the top point scorer in the league after returning from these two injuries. This was in large part due to the assists he recorded, he is at his best when he is a major contributor in the goal-scoring category. I always look back to the 2010-2011 season when Crosby was the best goal-scorer in the league. He registered 32 goals in 41 games before being knocked out with his infamous concussion. I kept asking myself how Crosby was able to score goals at this ridiculous pace.

To figure this out, I looked at where Crosby scored the majority of his goals that season and any other season for that matter. This was quite simple. He scored most of his goals right in front of the net. Crosby was at his best playing the role of a power forward and causing havoc in front of opponents’ goaltenders. He’d either tip-in shots, bury rebounds, or put his nose down and drive straight to the crease. These goals were coming no more than a few feet out from the goalie crease.

I realize that most goals are scored right in the front of the net or in the slot area. On the other hand, there are players like Steven Stamkos and Alexander Ovechkin who are threats any time they shoot a puck on the net. Crosby doesn’t have a hard enough shot to benefit from this luxury. At times, he seemed to be playing too much along the perimeter upon his two returns. Crosby was taking shots from outside of the slot area and not making his presence felt in the heavily trafficked areas to score goals.

When Crosby first returned from his concussion, he was also worried about proving his head could take a beating. He wanted to convince himself he could withstand any type of physical contact. Crosby echoed this feeling when he was interviewed by Bob Costas on Costas Tonight back on October 29th. Crosby seemed to be seeking extracurricular activity after the whistle to show he could defend himself in a scrum.

Crosby didn’t have his priorities completely in line when he returned from his concussion. But how could anyone blame him for worrying about whether his head could withstand a rigorous check? This is the natural instinct of any athlete returning from a concussion.

Right when it seemed Crosby was mentally past his concussion rehabilitation, he took a shot in the jaw from Brooks Orpik. This was another setback both physically and mentally. Crosby had to overcome the same fears as when he returned from his concussion. When he was interviewed by Mark Madden on the Mark Madden Show last week, Crosby admitted that he was very cautious about returning to the front of the net.

“It definitely took some time when you’re going to the front, especially when I first came back. It’s something you have to get past pretty quickly when guys are going to be shooting. You especially have to go there pretty often. It was just weird the way it happened, but it was something that probably crossed my mind a little bit more when I first came back.” -Sidney Crosby on the Mark Madden Show

This season Crosby has conquered his fears. Crosby started the season on a tear scoring eight goals in his first 10 games. Where did Crosby score the majority of his goals? Steps away front an opponent’s crease. Crosby has admitted to more than one person around the Pens’ organization that he needed to go to the net more than he was over the past few years. He has done just that, and is once again considered to be one of the top goal-scoring threats in the league behind Stamkos and Ovechkin.

Crosby is finally back to the top of his game. While he may have made two returns to the ice in the past two years, the real Sid the Kid hadn’t returned to true form until this season. Crosby is seen standing in front of the net and fighting through defenders to gain a net presence for a scoring opportunity. This proves that he’s over his physical and mental ailments and ready to move on with the second stage of his career.