Wow, was the first thing that came to mind after hearing the news that Devils forward Ilya Kovalchuk is retiring from the NHL at age thirty. Still in his prime, Ilya was well on his way to hitting many prestigious NHL milestones, including 500 goals, 1,000 games, and 1,000 points. Actually, he was probably well on his way to significantly surpassing a few of those benchmarks. Now, it appears none of that will happen.

The Contract From You Know Where

Kovalchuk and the Devils. They acquired him as a rental at the 2010 trade deadline for Johnny Oduya, a 1st round draft pick and two guys who would have only had NHL careers if they remained Devils – you know what I mean.

Offseason hit and the Devils signed Kovalchuk to a ridiculous deal spanning seventeen years for an impressively illogical total of $102 million dollars. The signing was outrageous beyond belief, and coming from the Devils, a franchise known for letting UFA’s walk, the absurdity of the signing was even more difficult to comprehend.

The NHL rejected Kovalchuk’s record breaking agreement the next day and forced a penalty on the Devils causing them to forfeit a 1st round draft pick of their choice over the next four seasons. Three seasons have gone by and the Devils haven’t paid up yet, so it’s safe to say that in the 2014 NHL entry draft, they will only choose in round 1 if they can somehow acquire a pick from another team. However, given Kovalchuk’s retirement, the Devils could and should appeal the NHL’s initial ruling. I have no idea if they have a good case but I can assure you that THW writers Dan Rice and Michael Gwizdala will keep you posted on the topic as details unfold, if details unfold.

Shortly thereafter, in the same offseason, the Devils officially inked Kovalchuk to a deal that didn’t break CBA rules and all was seemingly good. One thing that never made sense though, was why the New Jersey Devils, a franchise that always maintained success not giving UFA’s top dollar would suddenly decided to write a cheque that could’ve made Glen Sather shake his head in disbelief.

Big Day For The K 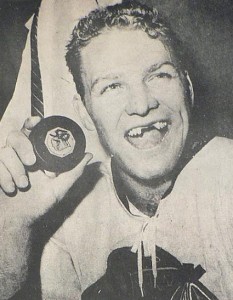 Remember NHL legend Bobby Hull? He’s Brett’s dad. Anyway, the Golden Jet as he was known back in the day, left the National Hockey League to sign with the Winnipeg Jets of the newly formed World Hockey Association for the first million dollar contract in professional hockey, circa 1972. I was born twelve years after Bobby made the decision to become hockey’s first true big money player so I can’t tell you from experience how significant an NHL retirement it was. I can say though, that Kovalchuk’s early retirement has the potential to be just as trailblazing if he does in fact do what many speculate and sign in the KHL.

Alexander Burmistrov just left for the KHL a few days ago. I remember watching Burmistrov for the Barrie Colts a few years back and thinking, this guy will never live up to the hype. He is good but not explosively good, and as a smaller scorer you have to be explosive. Kovalchuk is explosive, and he’s big too. Strictly based on raw talent and natural skill there ain’t many who compare to the Devils’ former multi-million dollar Russian sniper.

Greg Wyshynski of Yahoo Sports enlightens us on why Kovalchuk walked away from one of the biggest contracts in professional hockey in his interesting Puck Daddy piece entitled – Ilya Kovalchuk will join SKA, could earn $20 million per season: Report. I suggest you give it a glance if you’re looking for some great insight on the Kovalchuk retirement news.

Tough Road Ahead For Devils?

What’s next for the Devils? In the last thirteen months Lou Lamoriello’s Devils have lost prominent wingers Zach Parise, David Clarkson and Ilya Kovalchuk in exchange for nothing other than some extra cap space and a tougher road to the playoffs. Only a year removed from a Stanley Cup finals appearance the Devils now look to be a major player for a lottery pick in next season’s draft, except they don’t have their 1st round pick next summer. Penalties can hurt you in a hockey game, but a cap circumvention penalty such as this will be talked about for a hundred years if NJ finish bottom 5 and lose their lottery spot all because they wrongfully signed a player who retired before the penalty could even be enforced. We’re talking about cap circumvention here. Don’t do it.

Is The K The Way?

It’s always bigger than one guy when something like this happens. Kovalchuk is the first elite player to defect for the KHL since its conception. I’m not counting Jagr because he was passed his prime when he left and I’m not counting Radulov because he’s second rate compared to Kovalchuk. I guess the fear is that Ilya will open some sort of flood gate causing more players in their prime to switch leagues. Obviously, the biggest fear is that Russian superstars, such as, Alex Ovechkin, Evgeni Malkin and Pavel Datsyuk will follow suit and head home before their best playing days are over.

Those who will miss watching Kovalchuk regularly will get to see him in full swing next February at the 2014 Winter Olympics in Russia.