In a wild, rough-and-tumble affair that featured seven power play goals, three fights, a boarding major and three roughing penalties, the San Jose Sharks came back from a 3-1 second period deficit to outlast the Los Angeles Kings, 6-5 in the shootout. With the win, the Sharks edged ahead of idle Phoenix into the 7th seed in the Western playoff race, setting up a fantastic final weekend battle for the Pacific division crown and 3rd seed. As it stands, all three teams can still win the Pacific, but only the Coyotes control their own destiny. 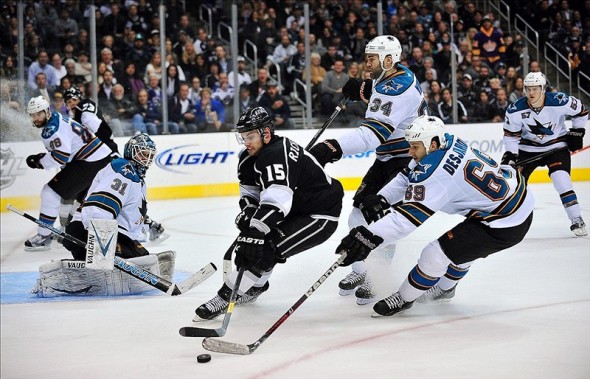 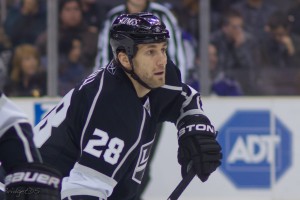 “It was a weird one,” Kings center Jarret Stoll said. “Definitely the weirdest of the year, probably. You just hope you’re on the winning end of one of those, and obviously we weren’t. It’s disappointing game just getting one point, but we’ve won in that building, we’ve played well in that building and we’ll have to do it again.”

For 18 of its 45 seasons, the Los Angeles Kings have been broken-down nags, failing to achieve the NHL’s liberal playoff benchmark. In start contrast, as evidenced by 16 playoff appearances in their 21 seasons, the San Jose Sharks have been veritable racehorses, winning six division titles and reaching the Western Conference finals three times.

However, over the final quarter-pole of the 2011-12 season, the Kings have looked like thoroughbreds on skates, while Sharks fans across the Silicon Valley have been muttering variants of Colonel Potter’s pet expletive, watching their team fade to the finish line. Despite the struggles both teams have had at various points this year, two things are certain: both have qualified for the playoffs, and either could win the division with two games left in the season. Or not, as Phoenix lurks in the mix as well. Regardless, tonight’s first half of the home-and-home series to end the season between the two clubs was an opportunity for each team to assert their dominance over the other in this bitterly-fought rivalry.

Although both teams had clinched the playoffs early in the game with losses by the Dallas Stars and Colorado Avalanche, the all-important first round home ice advantage was still on the line. The effort and emotional ebbs and flows reflected that of a playoff series.

In front of a sold-out Staples Center packed with screaming investment bankers, dancers hoping to eventually become starlets and the general beer-swilling rabble that represents the loudest of Kings fans, Los Angeles came out firing on all cylinders, outshooting San Jose 18-8 in the first period. After numerous outstanding chances, Kings power forward Dustin Brown, the subject of swirling rumors at the trade deadline and surprising enmity by Kings’ fans for allegedly not being vocal or consistent enough, continued his loud, consistent play of late. Building upon his 25 points (eight goals) in his previous 26 games, Brown assisted on the first Kings’ goal, tapping the rebound of an Anze Kopitar shot to defenseman Alec Martinez at the side of the net while on the power play. Martinez roofed the puck past Sharks netminder Antti Niemi for the early 1-0 Kings lead.

Almost eight minutes later, the Sharks responded. Behind the net, Daniel Winick found a pinching Jason Demers in front of Jonathan Quick, who directed the puck past the surprised Kings goalie. When the period ended, the game was tied 1-1.

The Kings regained control of the game with second period goals by Jarret Stoll and Dustin Brown, who scored his 22nd goal of the season with a pull-and-drag wrister from the slot at 13:19 of the 2nd period. With their sites firmly set on maintaining their lead in the race for the 3rd seed, Los Angeles could only react as follows after Joe Thornton’s power play tip-in goal drew the Sharks within one goal with 28 seconds left in the period:

The third period was a see-saw affair of high drama and uncharacteristically sloppy action by both clubs. Ryan Clowe’s breakaway wrister tied the game at 3-3 at 1:10 of the period. “We were fortunate that our power play was really good tonight,” Clowe said. “That sort of game was not really expected but we went at each other hard — it was a playoff game.” Justin Williams regained the lead for Los Angeles at 3:54 on a slapper that beat Antti Niemi. One minute later, Joe Pavelski scored his 29th of the season, also with the man advantage, knotting the game up again at 4-4. At 12:37 and yet again on the power play, Martin Havlat scored from the low slot to give the Sharks their first lead of the game, 5-4.

With less than four minutes left and the Kings on a 5-3 power play, Justin Williams scored his second of the game and 21st of the year, blasting the puck top shelf past Niemi, tying the score at 5-5 and ultimately sending the game to overtime. Although the teams remained tied after the five minute overtime and despite Clowe’s and Joe Pavelski’s shootout goals to win the game for the Sharks, the dramatic Williams tally helped secure a point for Los Angeles, ultimately setting up a winner-take-all final game of the season on Saturday — that is, unless Phoenix wins out and takes the division for themselves, or wins via a tiebreaker.

“There’s a lot on the line, obviously with the division,” said Clowe. “But one of the things was our character tonight and how we battled through it.”

“The other team has probably the top two or three power plays in the League,” Kings coach Darryl Sutter said. “We spent a lot of time in the penalty box. If you add up all the minutes and if they didn’t score on three of them, you’re probably killing about 15-16 minutes. It’s almost impossible to beat teams like that.”

The season concludes with a rematch on Saturday, with the puck dropping at 7:30 PM at the HP Pavilion. With the division possibly still on the line, horse hockey is probably not likely to be repeated.