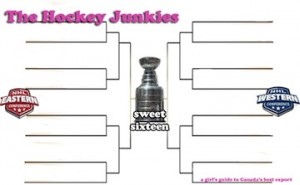 As hockey fans, the game makes us laugh and makes us cry (to be a little cliché).  Most fans remember the many ways hockey adds to the laughter in our lives.  My most recent example was a text message I received during the Vancouver Canucks-Nashville Predators series:  “Luongo only pawn in game of hockey.”  (apologies to Mel Brooks and Alex Karras)  Another source of laughter for me during the past two seasons has been The Hockey Junkies.

As the site graphic tells you, The Hockey Junkies is “a girl’s guide to Canada’s best export” written by college students who are mainly Pittsburgh Penguins, Chicago Blackhawks, and New York Rangers fans.  Noodles and Henrik provide a creative and tongue-in-cheek commentary to the wide array of hockey fan blogs.  These young women are long-time fans of the game and have more hockey acumen than many men their age (see their “unofficial motto” below).

Regardless, Noodles and Henrik also provide an unabashed appreciation for the men who play the game – and have no issues with objectifying any of them for their looks as well as for how they play the game.  And, before you comment on the objectification of hockey players, take a good look at how many men ogle the “ice girls.”  Turnabout is fair play, especially when you back it up with knowledge instead of short skirts.

Now that that part is out of the way, back to the hockey…

Noodles and Henrik, along with LeTude and Macke, have been blogging at The Hockey Junkies for just under three years.  A statement from their introductory post sums up their attitude:  “No one and nothing is off limits at The Hockey Junkies lair.”  This has included topics such as Matt Cooke and head shots, Patrick Kane’s escapades, and their opinions on the latest trades.  As Penguins season ticket holders, they often recap games with the same authority and hilarity that can be found throughout the blog.

Every summer leading up to training camps and preseason games, The Hockey Junkies does their own version of “One-A-Days.”  These posts give an interesting look at the teams, with both fact and opinion – from details like general manager, captain, arena, and recently traded players, to players you should / should not love and the team’s overall hotness level.

Like many other blogs, The Hockey Junkies provides links to the latest stories throughout the hockey world.  They have mourned recent losses like Derek Boogaard and celebrated the World Championships in Slovakia.  Over the past year or so, Noodles and Henrik have brought in some of their regular commenters to guest post on different topics as well.  This month, “Grace” contributed an On Our Soapbox discussion of Hockey and the Media that focused on the “battle” between the Philadelphia Flyers’ Mike Richards and the local media.  Grace posed some interesting questions about how much of a writer’s opinion should be brought into his articles and what a team captain’s role should be in consideration of the media.

On the sidebar, readers will find links to a number of The Hockey Junkies favorite blogs, a blog archive (the extra years are purposely done, especially for some of the multiple “One-A-Days” by other contributors), and a list of definitions.  For example, the verb “to Toews” means “to visually judge someone for what they did or said” and is based on some of the looks Jonathan Toews gives towards referees and opposing players as well as his own teammates.

The “Toews-face” is something already familiar to Blackhawks fans, and The Hockey Junkies simply made it into a definable verb.  However, Noodles and Henrik also get pretty creative with their post titles.  Who could resist something like “It’s a Break-Dancing Stripper Emergency” or “Who’s Your Doughty and What Does He Do?”

Final Thought: While probably not for everyone, The Hockey Junkies will make most readers laugh out loud – both for the facts as well as the fiction.  As their disclaimer reads:  “Everything said here is for entertainment purposes. Please don’t sue us for calling your favorite player a ‘monkey-faced miscreant’ because it’s our opinion…We are also not associated with any NHL franchise talked about here nor do we know any actual players. Unless you count that time we bumped into one, literally.”

So, that’s The Hockey Junkies in my words.  Here are a few words from Noodles.

Rebecca: Why did you decide to start The Hockey Junkies?

Noodles: The blog started because of The Pensblog.  We were huge fans of the guys over there and their humor.  But there was just something missing.  It just didn’t have the perspective that we had.  It was like a boys’ club at The Pensblog and we felt left out of the joke.  We were also huge fans of SportSquee but like the title says, it’s about all kinds of sports not just hockey.  I wanted to create a blog that was a combination of the two blogs.  A blog where women/girls could go and gush about how ‘hot’ their favorite player is while also discussing the latest hot topic in hockey without being judged and called a ‘puckbunny’.  We know our shit and like our unofficial motto says, ‘we can out-stat and out-drink any man who is up for challenge’.  We have an extensive knowledge about the sport it’s just that we can’t help our hormones when a hot hockey player skates past us.

Rebecca: How long have you been writing The Hockey Junkies?

Noodles: I created The Hockey Junkies in August 2008 so it has been almost three years of blogging.  Henrik is the co-founder and she helps out with graphics and NY Rangers news.  LeTude is our unofficial Twitter girl and Macke is our Canadian correspondent, letting us in on any and all news that happens in Canada (especially Western Canada).

Rebecca: What do you think The Hockey Junkies offers readers that differs from other blogs?

Noodles: I think that what The Hockey Junkies offers is a quirky sense of humor and a different perspective on issues that you wouldn’t normally see.  We aren’t so big on taking ourselves seriously so why should we be straight serious about hockey?  We are also girls so of course our opinions and perspective are different than say The Pensblog.  The blog is a girl’s perspective on hockey and how we can appreciate both the looks of players and also the actual game.

Rebecca: What feature do you think “defines” The Hockey Junkies?

Noodles: If you literally mean ‘feature’ then it’s Date Night Friday.  Seriously, it was best thing we ever came up with.  A lot of our followers came for that and they still email us with requests.

If you mean a feature or personality trait then it’s the perspective we have.  We like to have a non-biased approach for all teams and it shows in that we take issue with only certain things and we are unabashed fans of almost every team because we like to find the good in every team (even the Flyers and Capitals).  We don’t get emotional and just post awful things about a team because our favorite team lost to them.  We have allegiances and it does show but we try to keep a level playing field on most posts.

Rebecca: Is there a particular post or story that you are especially proud of – i.e. a scoop story, inspired writing, great interview, etc.?

Noodles: I think the ‘On Our Soapbox: Matt Cooke, Head Shots and Suspensions’ post was one of the best ones on the blog.  There was a lot of research done on the topic and you can tell, plus it is an opinion piece which is always different than what we usually offer at the blog.  The ‘On Our Soapbox’ feature really shows our knowledge of the sport and how passionate we are about some topics.

I also think that when we get a little ridiculous and have posts like we did during the 2011 All Star Game, those are the ones that represent us a little more.  Going full-on crazy and just saying whatever comes to mind is our favorite thing about running the blog.

Rebecca: Once the off-season starts, why should readers continue visiting The Hockey Junkies?

Noodles: We always have features going through the summer, whether our favorite teams are in the playoffs or not.  Last summer we had a Bad Girls Club type feature with NHL players in it and this summer will feature the next generation of ‘Date Night Friday’ which we are extremely excited about.  Plus, there is always something going on in the summer (arrests, charity work, Summer with Stanley) with NHL players, you just have to know where to look.

Rebecca: As a blogger, are there any other blogs you read or find inspiration from?

Noodles: Hmm, yes.  We love Down Goes Brown because of their hilarity.  And What’s Up, Ya Sieve is also another one where we can lose ourselves in their humorous posts.  For straight up information we prefer NHL.com, TSN.ca and the newspaper websites of every hockey team.